“I think it’s the largest collection ever shown outside of the museum in Geneva.”

WatchTime had a chance to talk with Larry Pettinelli, President of Patek Philippe U.S. before the opening of “The Art of Watches Grand Exhibition New York” (click here for more information about the exhibition) showcasing important timepieces from the Patek Philippe Museum in Geneva, from museums in the U.S., and from private collections. The exhibition at Cipriani 42nd Street in New York will be open to the general public and free of admission July 13th -23rd, 2017 from 10:00 am to 7:00 pm.

WT: What are Patek Philippe’s goals with The Art of Watches Grand Exhibition?

LP: I think the easy answer is [that] we’re trying to move the needle. We get a Grand Exhibition once every 10 or 12 years in the United States, and it’s an opportunity to educate people. It’s an opportunity to show people what Swiss watchmaking is all about. We’re trying to create an event that has something for everyone. For the really heavy-duty collector that understands Patek and understands technical watchmaking, for example, we’re going to have artisans and high-level watchmakers to speak with them. For the people who are more aspirational — who maybe know a little bit about the brand but don’t really understand why something takes a year or two to make — we can talk to that group as well. And of course, we’re always looking to introduce the brand to the next generation. How do you reach those 20- to 35-year-olds who are just starting in their work life and maybe are developing the kind of income levels and passions that can bring them to our watches? We want to talk to them about the brand and also introduce them to fine watchmaking.

The technical side is there. We have some really wonderful museum pieces from Mr. Stern, so even if you’re not a hardcore watch enthusiast, the artistry from some of these antique, vintage pieces go back to the 1500s. Mr. Stern is allowing us to bring, I think, what is the largest collection ever shown outside of the museum in Geneva. So, we’re very excited to reach all three of those groups.

It’s an amazing collection, and it’s only been shown in four places — Dubai, Munich, London — and this is the fourth. The collection changes for every venue, depending on the size and the focus and that kind of thing. We’re excited to show people the new watches, but also the museum pieces. We’re going to do a special room dedicated to iconic U.S. figures who owned Patek Philippes. There will be some local color.

WT: How was New York selected?

LP: The Sterns asked us, “Where would be the best place to accomplish a few goals?” One of our goals, obviously, is to get the name in front of as many people as we can. Secondly, we want to get the press opportunities. Most of the press headquarters are here in New York. The other reason is New York is a very good spot not only for collectors; it’s also one of the biggest markets that we have in the U.S. next to Los Angeles. But Los Angeles is a driving community; you’re dependent on people driving to a venue. The number of people that we want to expose these timepieces to — we could not do it in any other market. The other advantage is, on an international level, people are here for tourism. A lot of them come through New York anyway. We hope to capture that group as well.

WT: With the U.S. Historic Room at The Grand Exhibition, is there one specific piece that you personally look forward most to either welcoming back to the U.S., or perhaps showing in the U.S. for the first time?
LP: Actually, one of the pieces has an extraordinary story. We have a clock [that was] made for John F. Kennedy; there is a prototype of it in our museum. Patek Philipe made it back in 1962 to present to JFK in Berlin in 1963 after the “Ich bin ein Berliner” speech. I think this particular timepiece was commemorative in a lot of ways, but a local Berlin retailer said to the gentlemen who were going to be hosting not only Russia but also JFK, “Wouldn’t it be great to present a clock? Commission it from Patek Philippe, and it would signify the new warmer relationship between the U.S. and Russia.” So the clock [below] has three dials on it, one for “Washington, DC,” one for “Berlin” and one for “Moscow.” It’s an amazing historical piece, and it turns out that the actual piece was in the U.S. the whole time — at the John F. Kennedy Presidential Library and Museum in Boston! 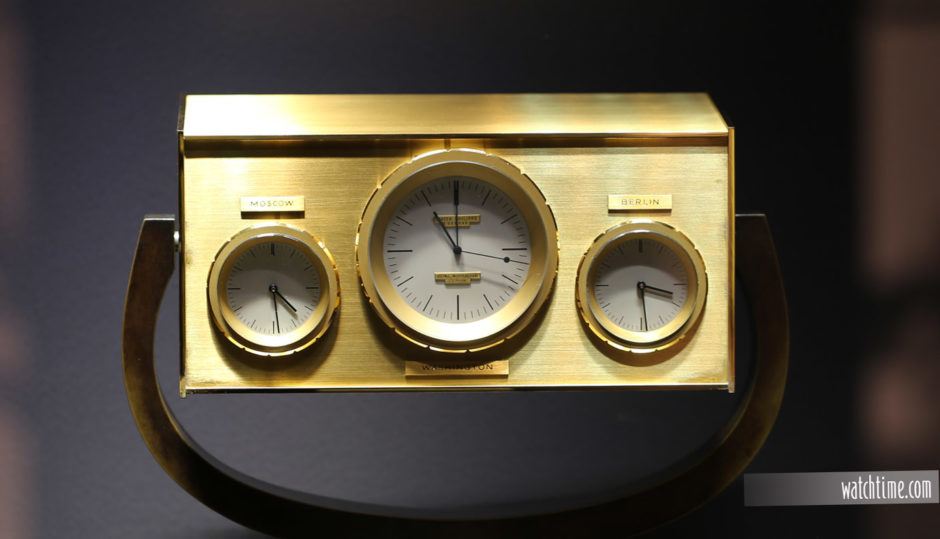 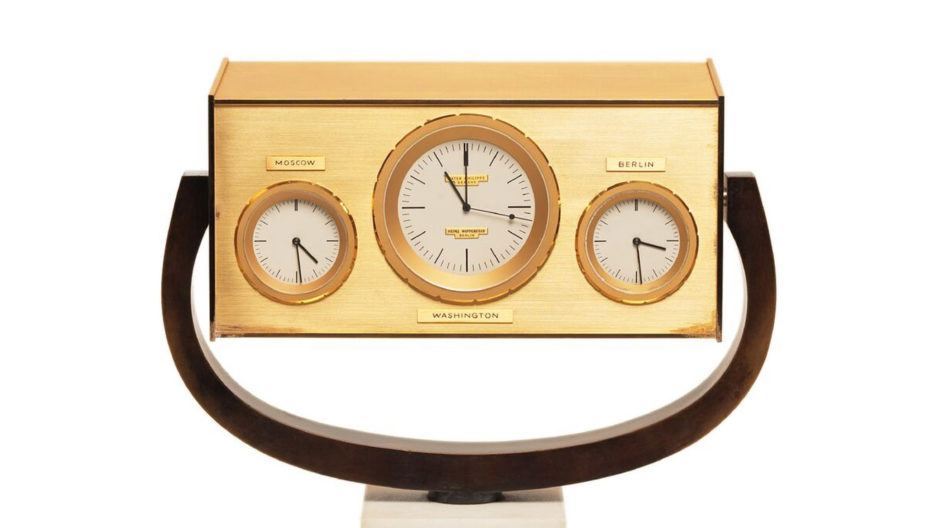 We basically asked them, “Would you ever allow us to show that piece?” The usual red tape ensued, but at the end of the day, it turned out that this year would have been JFK’s 100th birthday, and they’re kicking off a number of country-wide celebrations for JFK and they thought that loaning us that piece would be a really nice way to start the celebrations, so we were thrilled.

So that’s the one I’m waiting to see. They have to bring it down from Boston with a special guard because it’s in the National Archive. They have to place it, nobody can touch it, a guard has to stand next to it. It’s really an amazing sequence of things that have to happen. We have to make sure that the train [carrying it] can vary no more in humidity than a certain point, can’t raise or lower in temperature over a couple of degrees either way. We have to take a lot of care to make sure that thing is safe.