About 20 years ago, watchmakers who were working behind the scenes to develop and construct complications for major brands began stepping out of the shadows and marketing watches under their own names – Christophe Claret, Richard Mille, Peter Speake-Marin, and Franck Muller, to name a few. Others may have been self-employed for a few years but then came under the protective roof of a large company. But Antoine Preziuso is one of the lone fighters in the watch industry. His watch brand has existed since 1991. He produced up to 900 watches per year before the financial crisis struck in 2009. Since then, he has returned to his roots. Many of his timepieces are one-of-a-kind, although he also produces a few models in small series. The question of limitation, which some large brands may use to create individuality, does not arise here.

Preziuso was strongly influenced by his Swiss homeland. He grew up in a traditional watchmaking neighborhood in Geneva in the 1950s. “When I played in the narrow streets, I would tinker with watchmaking tools and components for watch movements that the little watchmaking workshops had put out on their doorsteps to be picked up for disposal,” he recalls. Preziuso’s father, who worked for a watch manufacturer, would show his son how to take apart and reassemble an alarm clock or a table clock. Antoine enjoyed himself immensely and his early experiences prompted him to enroll at the famous Geneva Watchmaking School when he became a teenager.

He studied there for four years. During this time, he was always drawn to the watchmakers in his old neighborhood. Here he met successful watchmakers, such as Gérald Genta, whose watches Preziuso liked so much that he asked Genta if he could work for him. “He told me I should finish school first,” Preziuso says.

Preziuso is a gifted storyteller. You can listen to him tell stories from his past for hours. He’s a romantic, an art lover, and a realistic dreamer – because most of his ideas become reality. He acquired essential watchmaking know-how during the two years he spent as a young watchmaker at Patek Philippe. Since he graduated at the top of his class, the firm didn’t hesitate to hire him. “I learned a lot there, especially about what quality means and how complications work,” he says. He enjoyed working at Patek Philippe, but one day, talking with a colleague who was about to retire triggered a turning point in his life. “He said I’d be surprised to see how quickly time passes,” Preziuso recalls. Preziuso quit his job and went traveling with his girlfriend, whom he would later marry. “I didn’t want to spend my life in a factory,” he says.

After some time had passed, Preziuso’s path led him back to Geneva. But the thought of working for someone else no longer appealed to him, so he started his own business. He bought old timepieces cheaply from antique dealers and at flea markets, repaired and refurbished them, and then sold them at a tidy profit. More or less incidentally, he also began designing his own timepieces. Today he still makes the “Siena,” which was one of his very first models. It’s a single-handed timepiece inspired by the tower clock in Siena, Italy. When he displayed it at the independent watchmakers’ booth at Baselworld, it sparked the interest of a Japanese businessman, who asked if he could order 200 “Siena” timepieces. Preziuso was startled and was clearly not eager to accept the offer. But his wife, who happened to be standing next to him, immediately said, “Yes. That’s what we do. We can do it.” And that’s how the Antoine Preziuso brand got off the ground. The brand still has many fans in Japan today.

Big orders soon followed. A well-known watch brand commissioned Preziuso to create a watch with a repeater movement and a perpetual calendar – a previously unachieved combination of the greatest complexity. And Preziuso designed and built the first wristwatches with complications for Harry Winston when that brand entered the watch industry. Today, Preziuso seldom works for other brands. He’s busy with his own ideas. But he is no longer a lone wolf: his son Florian has completed his watchmaker training and spent many years working with his father on creating a watch with three tourbillons. “We had already worked on this for a very long time. Then one day, Florian suddenly said, ‘I’ve got it!’” His father was a bit skeptical, but the two men built a prototype in large scale – and it worked! “Then we miniaturized the whole thing and built the watch,” Antoine Preziuso says.

With the “Tourbillon of Tourbillons,” the father-and-son team achieved three patent-protected inventions. These also enabled their watch to be entered in the Grand Prix d’Horlogerie de Genève, where it won in not just one category, but two: the Public Prize and the Innovation Watch Prize. “That was a very great moment for us,” he recalls.

The Genevan native is also a trailblazer in the quest for new materials. In 1991, he was the first watchmaker to include meteorite rock in a watch. His latest model is the Stella Polare, whose case is crafted from stone cut from the Muonionalusta meteorite, an iron-rich rock that was discovered in northern Sweden in 1906. To make the “Widmannstätten” patterns of this iron meteorite visible, the material must be polished and treated with acid. This results in a unique, crystalline, hatch-marked surface. “This is a watch that outlasts time,” Preziuso says. He loves paradoxes of this sort – as do a great many of his fans.

After Preziuso and his son complete a few timepieces, the family goes on a tour and presents them to connoisseurs of the brand in Dubai, Tokyo, Singapore, Seoul, and the United States. Few of these unconventional timepieces return to Switzerland because they quickly find eager buyers during these sales trips. To hear Preziuso tell it, it sounds like a stress-free life. But that, too, is an art. It’s called l’art de vivre, which means that despite all the strenuous efforts required, one can enjoy life.

All text by Katrin Nikolaus.

No Responses to “Antoine Preziuso is Horology’s Best Kept Secret” 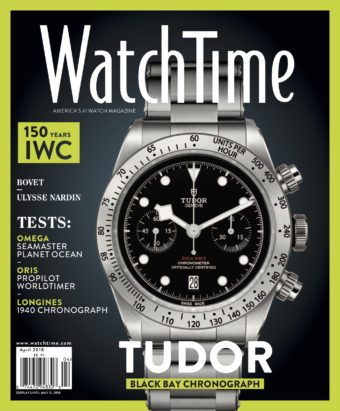