The first watch to be released by Oris in 2019 is a professional-grade diver that was developed in collaboration with Roman Frischknecht, one of Switzerland’s only commercial divers who has helped spearhead the build-out of the ProDiver collection since 2009. One of the most notable results of this partnership has been the brand’s proprietary Rotation Safety System (RSS), which allows the wearer to keep track of a certain time period using the unidirectional rotating bezel, which can be locked to prevent accidental adjustment.

As a full-fledged saturation diver that can often be found in the icy waters of the North Sea, Frischknecht encouraged Oris to create a locking system that would secure the unidirectional rotating bezel in place. Saturation diving is a high-risk job and being able to have the confidence that your tool watch won’t get bumped can be the difference between life and death. 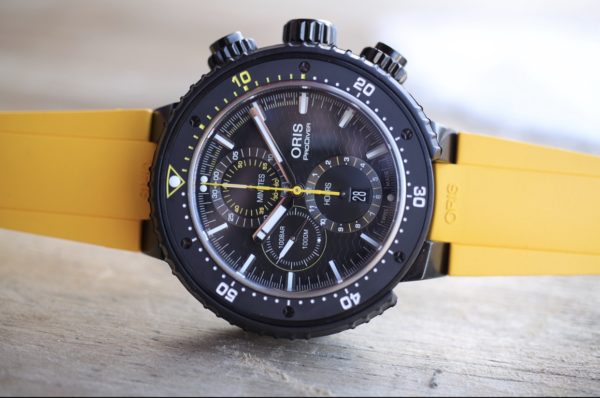 The ProDiver Dive Control — the new model announced by Oris yesterday at its pre-Basel event in Vail, CO — takes the utilitarian factors seen in previous ProDiver entries and elevates them with the addition of a 60-minute chronograph counter at 12 o’clock and attractive yellow detailing that immediately catches the eye. The heavy-duty 51-mm case is constructed of Grade 2 titanium, adding to its wearability, and is coated in scratch-resistant black DLC. The water resistance rating, as you might expect, is specced to an impressive 1,000 meters and is aided by a helium escape valve and screw-down crown and pushers. 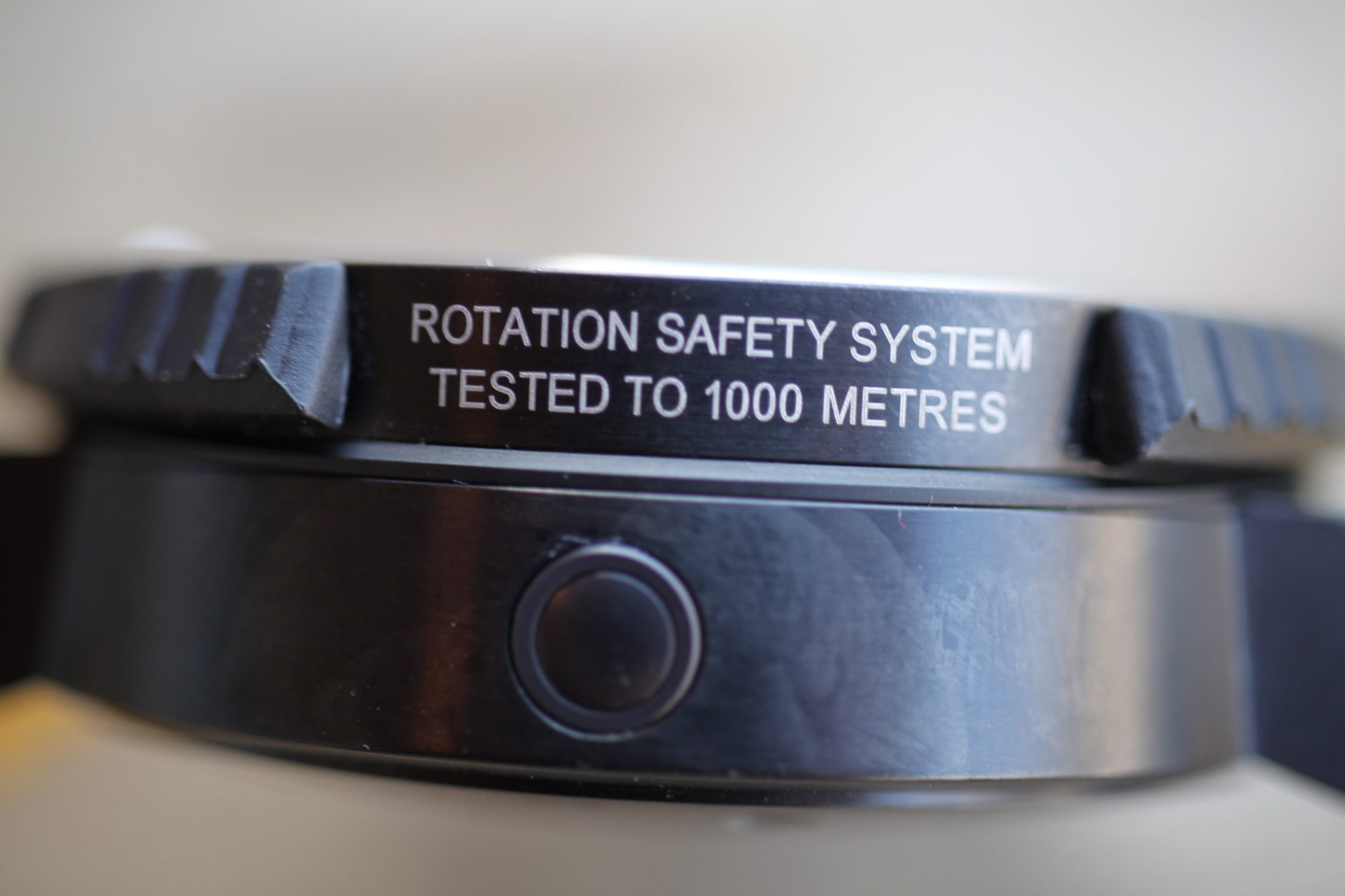 The Rotation Safety System is patented by Oris.
1/3 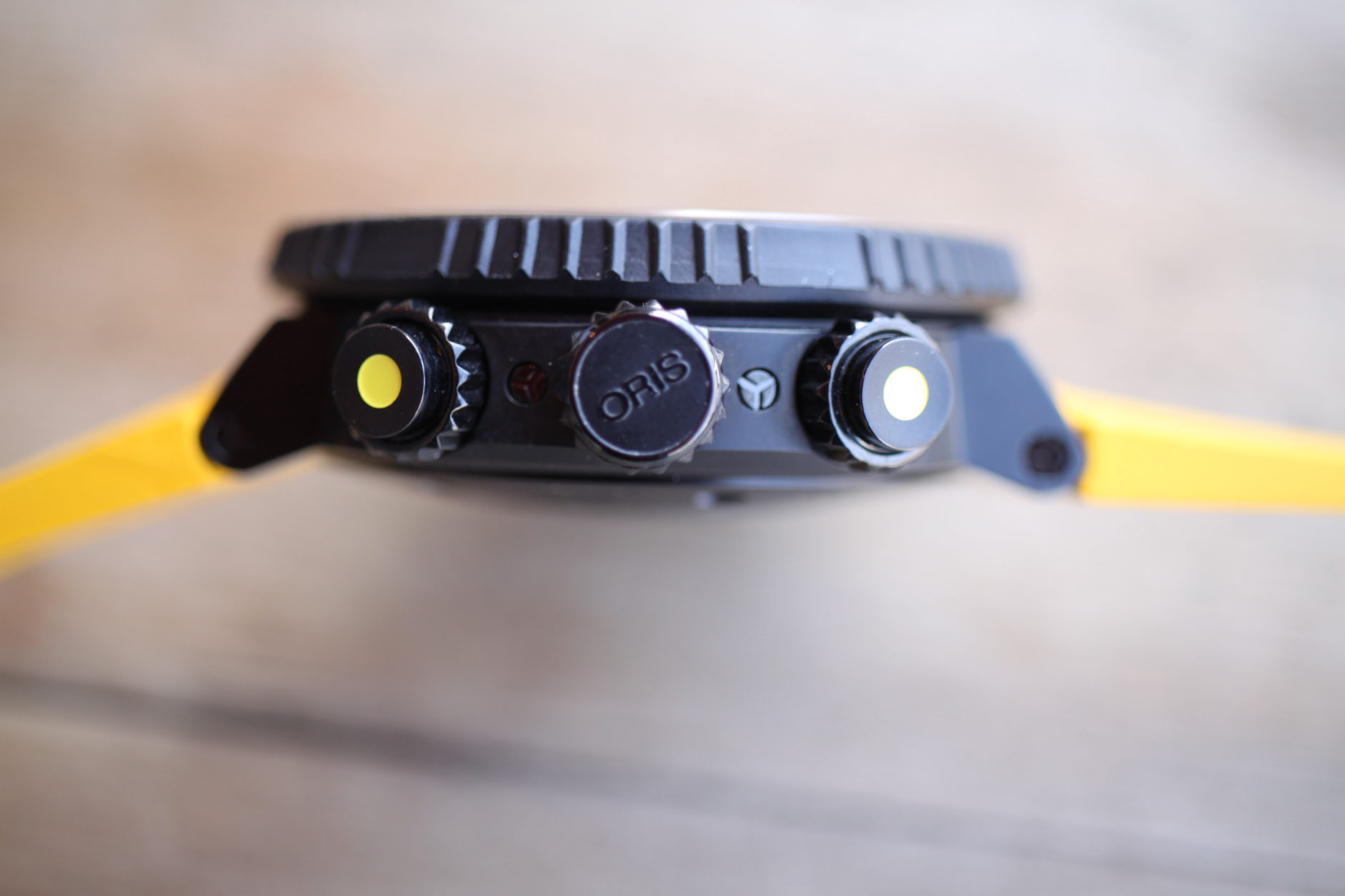 A screw down crown and pushers aid in the watch’s underwater reliability.
2/3 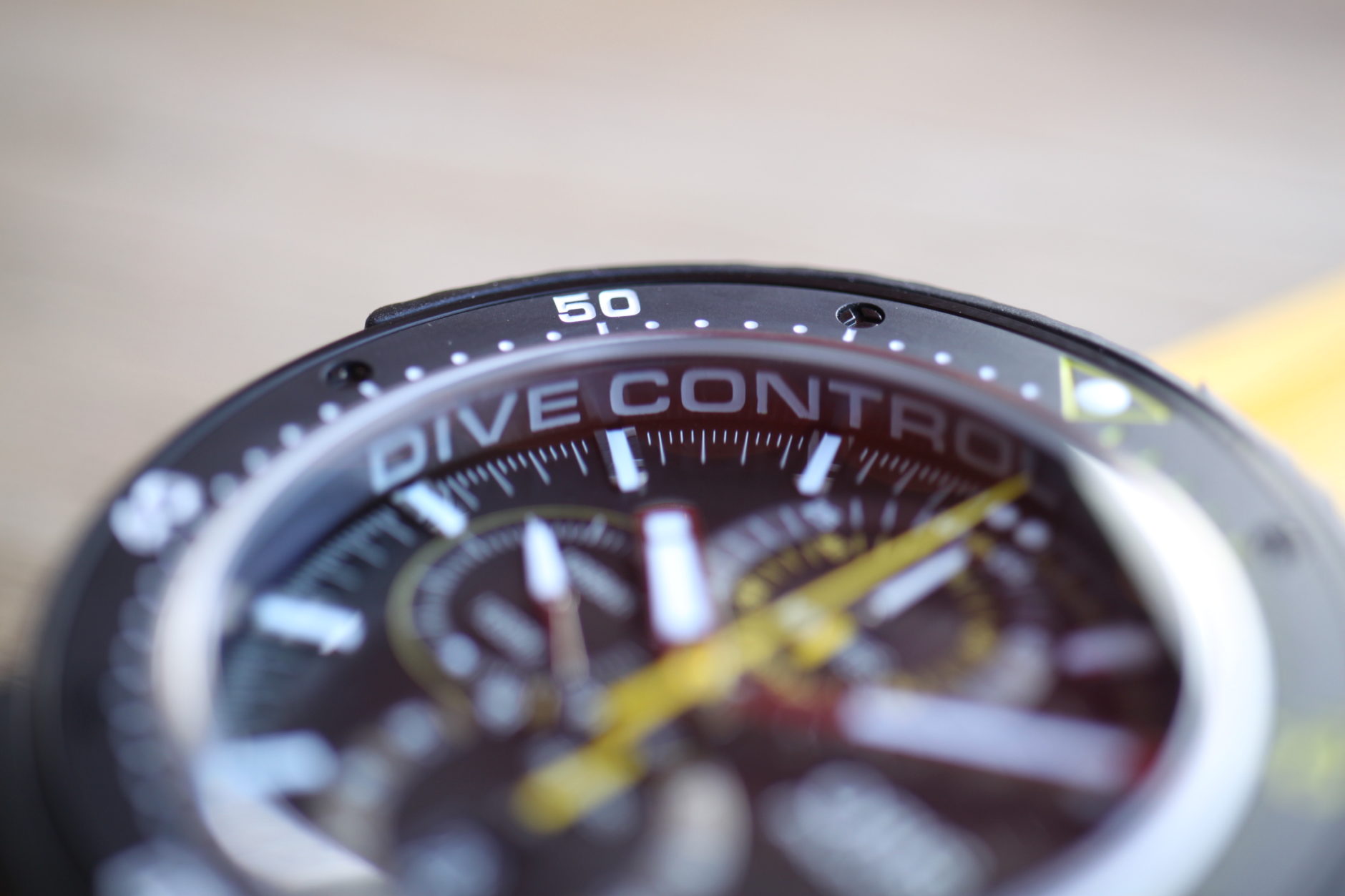 The watch’s name is taken from the Dive Control Specialist course, the world’s most comprehensive entry-level class for professional divers.
3/3

Powered by automatic Oris Caliber 774, which uses the workhorse Sellita SW500 as a base, the ProDiver Dive Control has a power reserve of 48 hours. A color-matching date wheel is located unobtrusively inside the 12-hour counter at 6 o’clock. The dial, which is protected by a double-domed sapphire crystal with anti-reflective coating, features a subtle wave motif that goes across the dial. 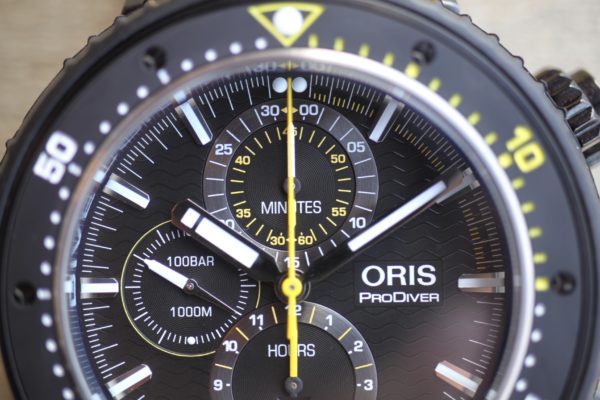 The Oris ProDiver Dive Control is a natural extension for the ProDiver collection. It boasts the RSS technology that the line has staked its name on and uses color in a way that helps make an already bold timepiece even more striking. Oris is doing some really interesting work with color these days. From the minty-green Pointer Date Anniversary model to the blue/bronze combination of the Carl Brashear Chronograph, the brand has continually executed a variety of colors in an impressive manner and the Dive Control is no exception. Black and yellow isn’t a colorway that I would normally be interested in on a watch, but Oris has used just the right amount of yellow to add a burst of color to the DLC coating without it seeming like “too much.” 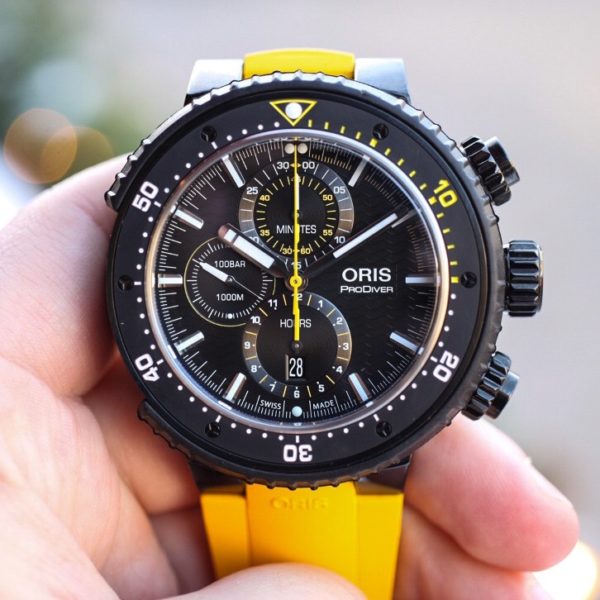 If you’re interested in picking up the ProDiver Dive Control, it will be available in a limited edition collection of 500 pieces to be officially released this month. USD pricing has yet to be confirmed but we were told to expect it to land in the $5,000 range.

No Responses to “Oris Announces the Heavy-Duty ProDiver Dive Control”