Hamilton Watch Company, founded in Lancaster, Pennsylvania in 1892, marks its 120th anniversary this year. To commemorate the milestone, Hamilton has collaborated with the National Watch & Clock Museum (NAWCC) , one of the world’s largest museums devoted to the art, science and history of timepieces and timekeeping, to curate a month-long public exhibit of Hamilton archives at New York City’s Tourneau Time Machine.

The exhibit, which opened on June 4, takes a look back at Hamilton through the years, and is chock-full of interesting items for watch lovers and history buffs, including photos of the original Hamilton factory and past employees, several vintage timepieces (including a marine chronometer from the 1940s, an original Hamilton Pulsar, and the Ventura model that Elvis Presley wore in Blue Hawaii), dozens of old advertisements, original company newsletters and video testimonials from former employees. All items are either from Hamilton’s archives or on loan from the NAWCC Museum. There is also a virtual museum on the brand’s website (www.hamiltonwatch.com/museum), compiled with the help of the NAWCC and its rich archives.

Also on display during the exhibit is Hamilton’s VOTEC 221 Mock-Up Airplane, which was built using components certified for aircraft construction. With a Wingspan of 20.7ft, a length of over 19.5 feet and a weight of approximately 1,000 lbs, the plane is a one-to-one replica of the plane Hamilton pilots fly. Click the images below for a slideshow of the exhibit, including scenes from the opening-night event attended by VIPs from Hamilton, Tourneau, the NAWCC, and the press.

The Hamilton Pulsar, the world's first LED digital watch, from 1970

END_OF_DOCUMENT_TOKEN_TO_BE_REPLACED 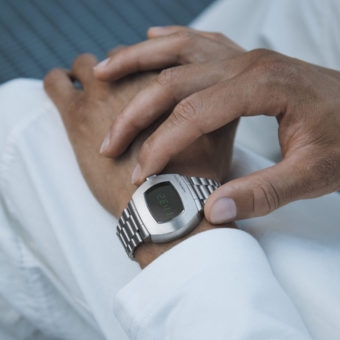