To celebrate the 15th anniversary of the release of its now-iconic Big Bang model in 2005, Hublot introduced an assortment of new and special Big Bang timepieces at the recent  LVMH Watch Week in Dubai. Among them were the Big Bang Integral, the first Big Bang with an integrated metal bracelet fused with its case; the Big Bang MP-11 Red Magic, a new brightly colored ceramic watch featuring a 14-day power reserve; and the watch we’ll be focusing on today: the new Spirit of Big Bang Meca-10.

The Meca-10 movement was first seen in the original Big Bang Meca-10 model, and well-known for its 10-day power reserve, achieved through the energy stored within two large barrels. For this latest model, the movement required reworking to fit into the barrel shape of the Spirit of Big Bang — a line extension introduced in 2014 — rather than into the traditional round case shape of the original Big Bang. The ultimate goal was a “hybrid” design that would marry this round in-house movement with the Spirit’s collection’s unconventional tonneau-shape case dimensions.

The overall design of the watch is very similar to that of the original Spirit of Big Bang models, using a 45-mm, barrel shaped case with six H-shaped screws securing the bezel and two additional screws fastening the strap at both ends to the lugs, as well as a bulky crown with guards (and the crown-guard motif repeated on the opposite side of the case). The dial of the watch is clearly differentiated from the original model, though, with the specially-developed and skeletonized Meca-10 movement making up the bulk of the visual imprint. The face does feature two wide sword hands for the hour and minute, matching the applied hour markers on the outer edge of the dial. At 3 o’clock is a power-reserve display, and at 9 o’clock a skeletonized subdial for the seconds. 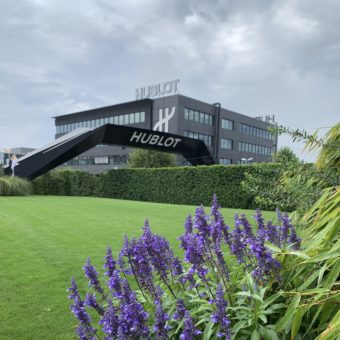