Last week, we had the chance to catch up with Hamilton and see a few of the brand’s pre-Baselworld novelties. As one of the more accessible watch brands within the Swatch Group, Hamilton always tries to balance innovation with affordability in its new pieces, while maintaining the hybrid tool watch aesthetic that its fans have come to love. The first new watch from Hamilton that we’d like to show you manages to do all of that, while still looking fresh. Here is the Khaki X-Wind Auto Chrono Limited Edition. 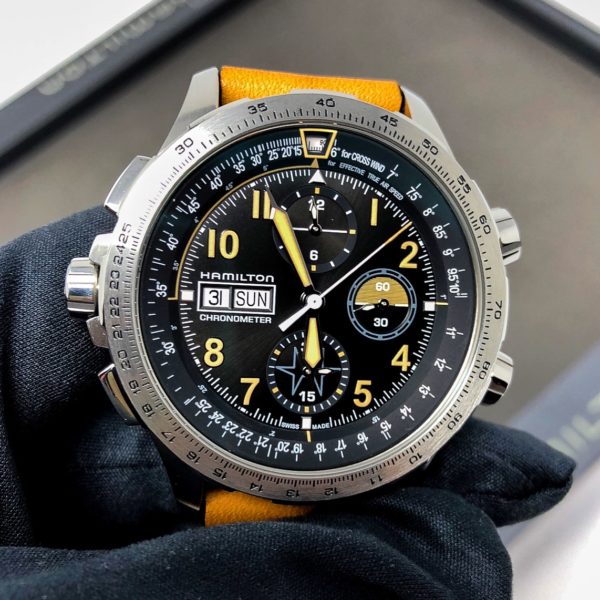 Hamilton is introducing this watch as a celebratory piece to commemorate its 100th anniversary of “timing the skies.” While that descriptor seems somewhat vague, the American-born brand does have a significant amount of its heritage tied into the development of aviation in the United States. In 1918, Hamilton was chosen as the official timekeeper of the first U.S. Airmail flights between Washington, D.C., Philadelphia, and New York. Eight years later, a Hamilton was on the wrist of the first pilot to reach the North Pole. And in the 1930s, the brand became the official watch of the four major airlines in the United States at the time and was the timekeeper of the first non-stop coast-to-coast service between New York and San Francisco. Needless to say, Hamilton has earned its flight time.

This new watch features all the necessities you would expect from a pilot watch, including an oversized 45-mm case, chronometer certification, day/date indicator, and a highly legible black dial with sand-colored and Super-LumiNova-coated numerals. What makes this watch special, though, is the complex cross-wind calculator on the turning bezel that enables a pilot to quickly compute the effect windspeed will have on their flight. While this won’t be a selling point for the average pilot’s watch enthusiast, it’s easy to imagine its usefulness for the serious pilots among us. It also presents an advantage over similarly priced and less complex pilot’s timepieces. 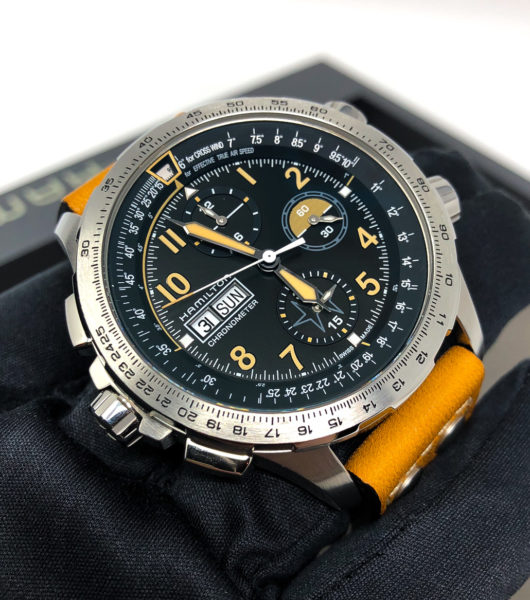 The crown on the left side of the dial functions like a typical crown and allows you to set the time, date, and month, while the two crowns on the right side are for adjusting the upper and lower interior rotating bezels. The two pushers on the left side are, of course, for starting, stopping, and resetting the chronograph. You can find a comprehensive guide on how the crosswind calculator works here.

While being able to calculate the crosswind is definitely impressive (what a party trick, eh?) and only amplifies the tool-watch coolness factor, the real story here for horological enthusiasts can be found inside the watch. The new COSC-certified H-21-Si caliber is the first Hamilton chronograph movement to include a silicon hairspring. As you’re probably aware, the usage of silicon has proliferated over the past decade and, especially when it comes to its usage in hairsprings, makes the watch less sensitive to shocks, more precise due to the material’s anti-magnetism, and will overall extend the intervals between service for your timepiece. The movement also provides a 60-hour power reserve and is water resistant to 100 meters. 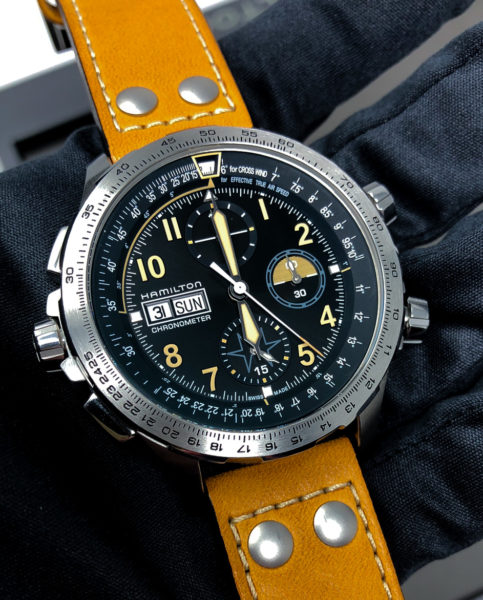 Other details of note include the stainless steel case and your choice of a brown calf leather strap with an H-buckle (for Hamilton) or a stainless steel bracelet with a folding clasp.

The Hamilton Khaki X-Wind Chrono is limited to 1,918 total pieces, will be released in May of this year, and is priced at $2,595.