The material that became known as gunmetal, or burnished steel, came into widespread use around 1845, replacing iron as the go-to material in the construction of railroads, bridges, and buildings (not to mention guns). After it was used in the Brooklyn Bridge (in 1885) and the Eiffel Tower (in 1889), it became widely popular. Gunmetal watches first appeared around 1870, and because they were more affordable than timepieces made of gold — which was much more commonly used for watch cases at the time — they essentially brought watches to the masses.

However, despite the fact that these steel watches were seen as more egalitarian, many of them still had features that we would today consider signs of high horology: dials of white or colored enamel with flinque cartouches, decorative gold inlays, skeletonized dials, and many types of mechanical complications, including chronographs, alarm functions, world-time indicators, and repeaters. There were even gamblers’ watches with games, rather than timekeeping functions, built into the movements.

The collection shown in “Steel Time” and at the Forbes Galleries had been previously on display at F.P. Journe’s manufacture in Switzerland and at the Swiss embassy in Tokyo, Japan. Journe himself is quick to point out that one of his most popular and expensive models, the Sonnerie Souveraine, follows in the footsteps of these complicated steel watches: it is the only one watch in his collection that comes in a steel case, because steel is better at amplifying chimes than gold or platinum.

The Steel Time collection will be on exhibit at New York’s Forbes Galleries (62 Fifth Avenue) from April 21 through September 15. “Steel Time,” the book, retails for $250 and can be ordered directly from F.P. Journe’s New York boutique: call 1-212-644-5918 or email ny@fpjourne.com.

Click below to see a slideshow of some of the standout gunmetal timepieces from the exhibit.

◄ Back
Next ►
Picture 1 of 8
No Responses to “New F.P. Journe Book and Exhibit Celebrate Historic Gunmetal Watches”

END_OF_DOCUMENT_TOKEN_TO_BE_REPLACED 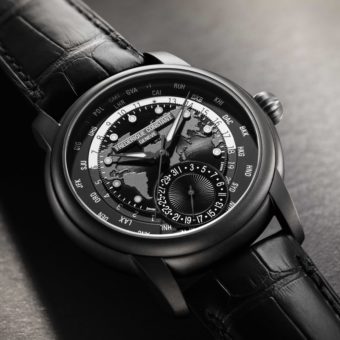