It’s been a while since we spotlighted a new piece in Tudor’s ever-expanding, historically derived Heritage collection, and even longer since we explored the niche category of watches with mechanical alarms, so today we remedy both with a close-up of the Tudor Heritage Advisor, an attractive timepiece that has been largely overshadowed by the sportier members of the Heritage series like the Black Bay and Pelagos.

The Heritage Advisor is a modern re-interpretation of an alarm watch issued by Tudor in 1957, back when this once-practical complication was new — just one year after Jaeger-LeCoultre released the famous Memovox Automatic, the first alarm watch with a self-winding movement. Its case proportions and shaped lugs are reminiscent of that vintage timepiece, as are the dial’s dauphine hands, beveled hour indices, and central red hand for the alarm function. Much of the Advisor’s other elements speak to a contemporary audience, including the case size (42 mm in diameter, as opposed to the original’s 34 mm), case material (satin-brushed and polished titanium, which Tudor says provides optimum sound quality for the alarm), and colorway (rich cognac brown for the dial and leather strap).

Beyond its striking color scheme, the dial offers a variety of textures and finishes to complement its host of displays and add to the depth of its face. The center is opaline, the calendar subdial at 6 o’clock is circular-grained, the minute track has a sunburst satin finish, and the outer flange and the alarm’s round power-reserve indicator at 3 o’clock  are sandblasted.

Driven by Tudor’s Caliber 2892, which merges an ETA base movement with an in-house-developed module, the watch’s alarm function works as follows: the pusher at 8 o’clock activates and turns off the alarm, as displayed by the ON/OFF display at 9 o’clock; the crown at 2 o’clock, engraved with “Advisor,” sets the alarm time via the red hand and the outer minute track. The other crown at 4 o’clock, engraved with the familiar Tudor rose emblem in black lacquer, sets the time and date, the latter indicated on the counter at 6 o’clock.

Each Tudor Heritage Advisor watch comes on either the aforementioned cognac-colored alligator leather strap or a steel bracelet with a folding clasp, and both options also include an additional black silk jacquard strap made specially for Tudor by a 150-year-old family business in St. Etienne, Switzerland. The watch retails for $6,000 on leather and for $6,225 on steel.

No Responses to “The Tudor Heritage Advisor Sounds a Historical Alarm” 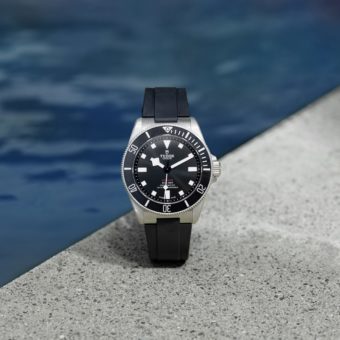 Tudor Drops Next Generation of the Pelagos ...

END_OF_DOCUMENT_TOKEN_TO_BE_REPLACED 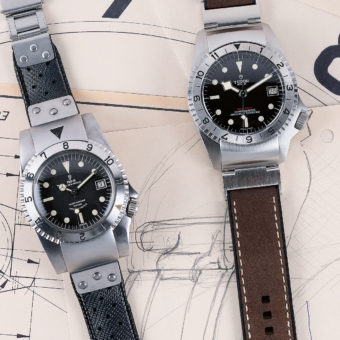 A Prototype in Series: Reviewing the Tudor ...

END_OF_DOCUMENT_TOKEN_TO_BE_REPLACED 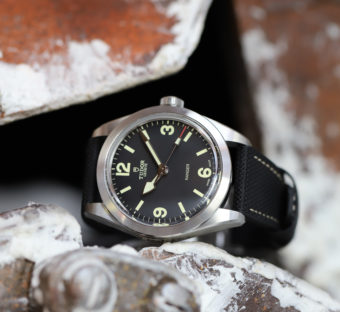