In addition to the many watch-world anniversaries being commemorated this year, 2018 also marks 100 years since the death of one of Switzerland’s best-known artists, 19th-century symbolist painter Ferdinand Hodler (1853 – 1918). And leave it to Swiss watchmaking maison Jaeger-LeCoultre, which has previously paid tribute to the work of Dutch painter Vincent Van Gogh, to commemorate the occasion with a limited-edition Reverso watch from its heralded “Métiers Rares” workshops. Consisting of three models, each limited to only eight pieces, the Reverso Tribute Enamel is this week’s Watch to Watch.

Like the Van Gogh watch that preceded them in 2016, the Reverso Tribute Enamel timepieces dedicated to Hodler are notable for their miniaturized reproductions of the artist’s works, executed in intricate engraving, enameling, and miniature painting, on the dials. The front dial on the swiveling Reverso case features an engraved “woven” motif, achieved with the use of a century-old guilloché machine, which is delicately rendered by an expert artisan and then covered in translucent grand feu enamel in a color that reflects the predominant tone of the miniature painting on the watch’s back dial. Each of these enamelled paintings, framed by an intricately engraved border as well as the Reverso case’s emblematic gadroons, re-creates in stunning detail one of Hodler’s masterpieces depicting the landscapes of his (and JLC’s) native Switzerland. The artisans at the brand’s Rare Handcrafts atelier in Le Sentier required at least 50 hours of work for each painting in order to reproduce, as faithfully as possible, Hodler’s canvases on the dial’s 3 cm x 2 cm surface.

The first of the Tribute Enamel editions (below) depicts “Lake Geneva with Mont Blanc in the Morning Light,” which Hodler produced shortly before his death in 1918. The pink and gold colors of the lake, as viewed in the early sunrise hours, harmonizes with the dark blue of the mountains and gold tones of the clouds for a tranquil scene, which is balanced by the light gray dial on the front side of the watch. 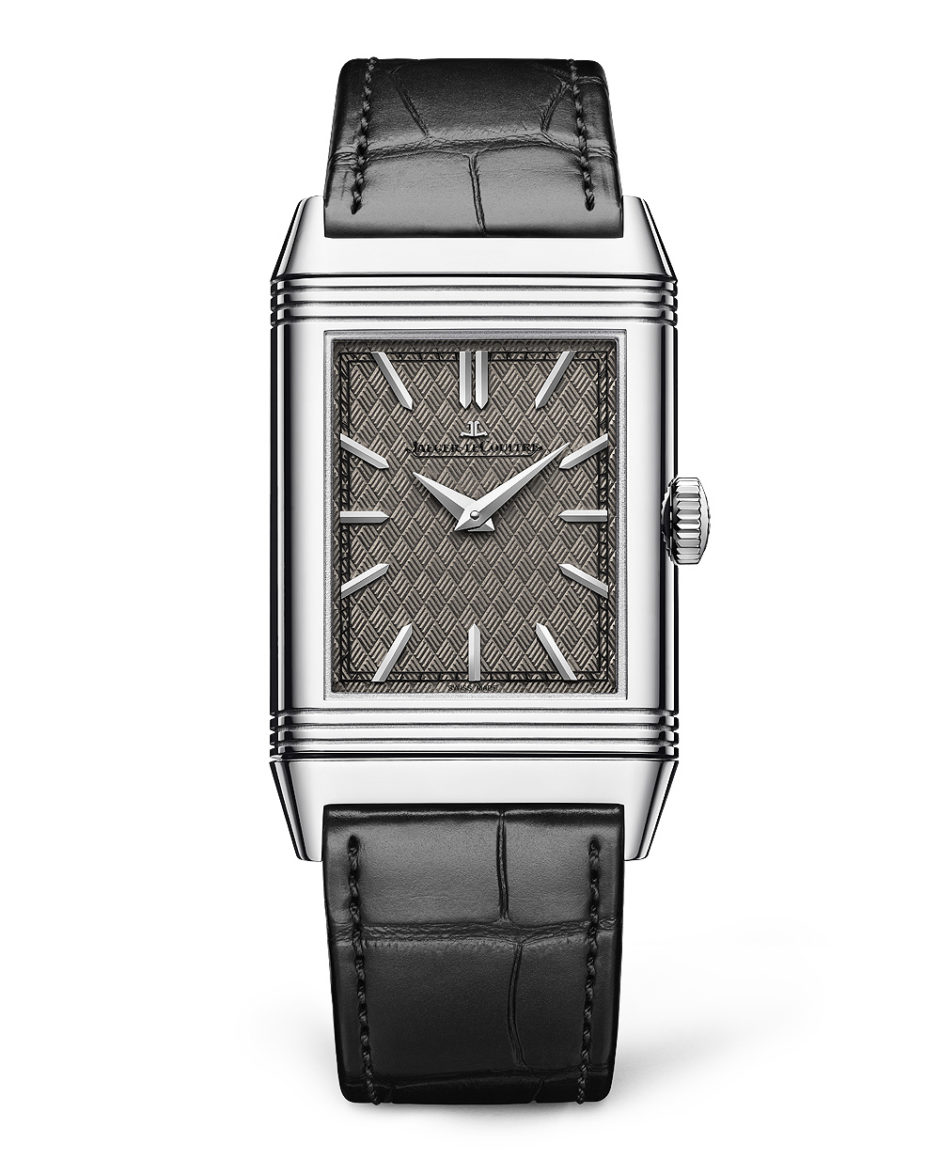 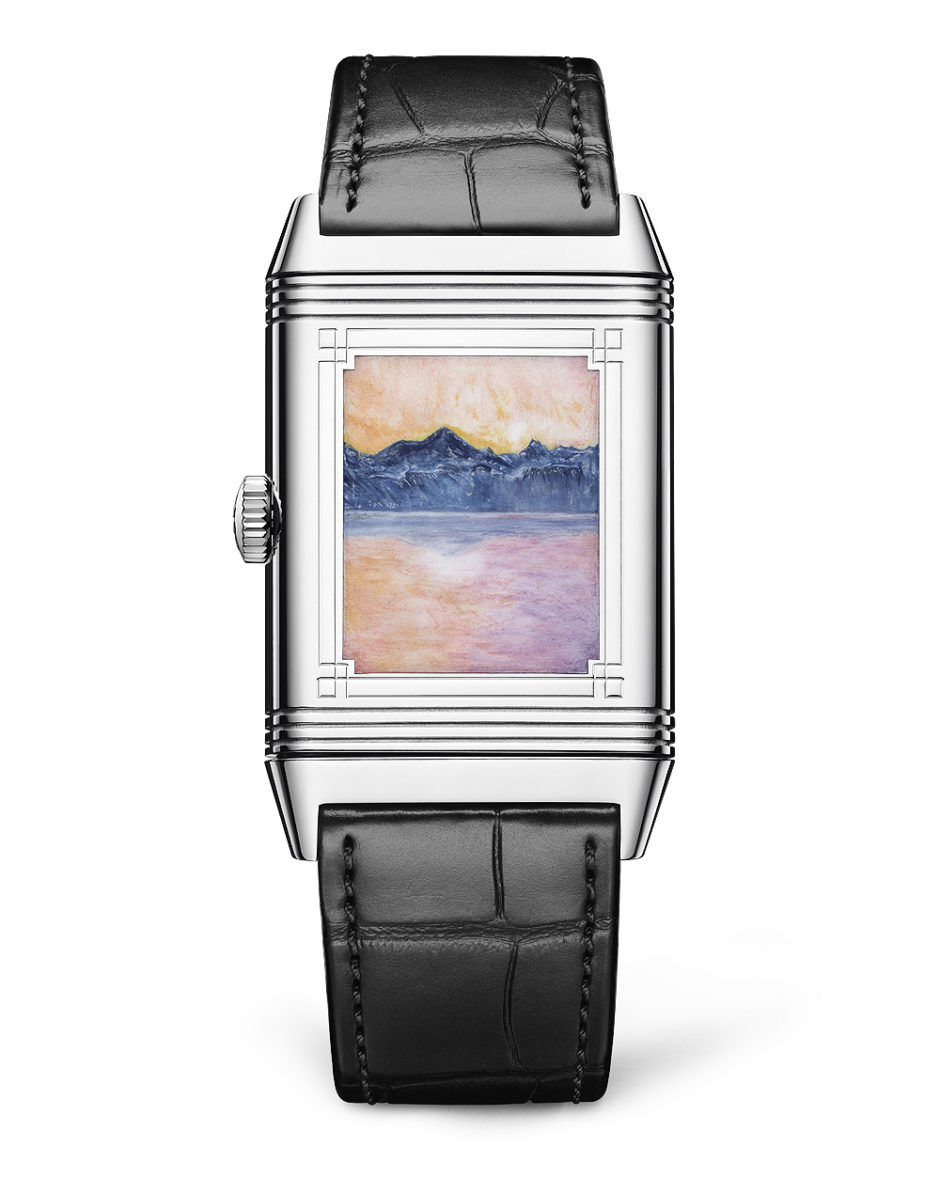 The 1904 painting, “Lake Thun with Symmetric Reflections Before Sunrise” (below), is re-created in miniature on the second model. The painting depicts a brighter scene with blue-shaded mountains, clear white and light blue waves of water, and a green-tinted foreground of rocks, echoed in the watch’s pine green front dial. 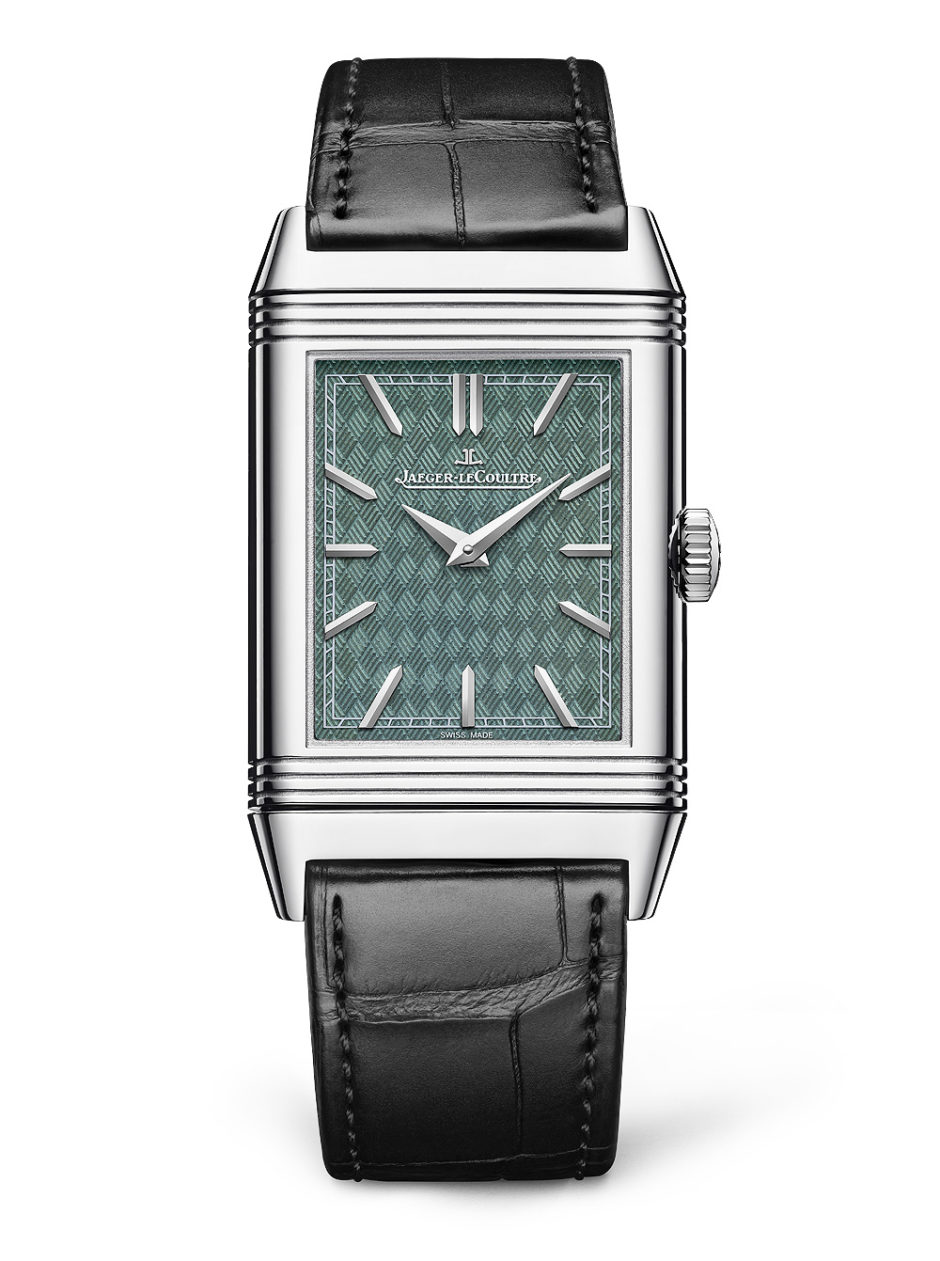 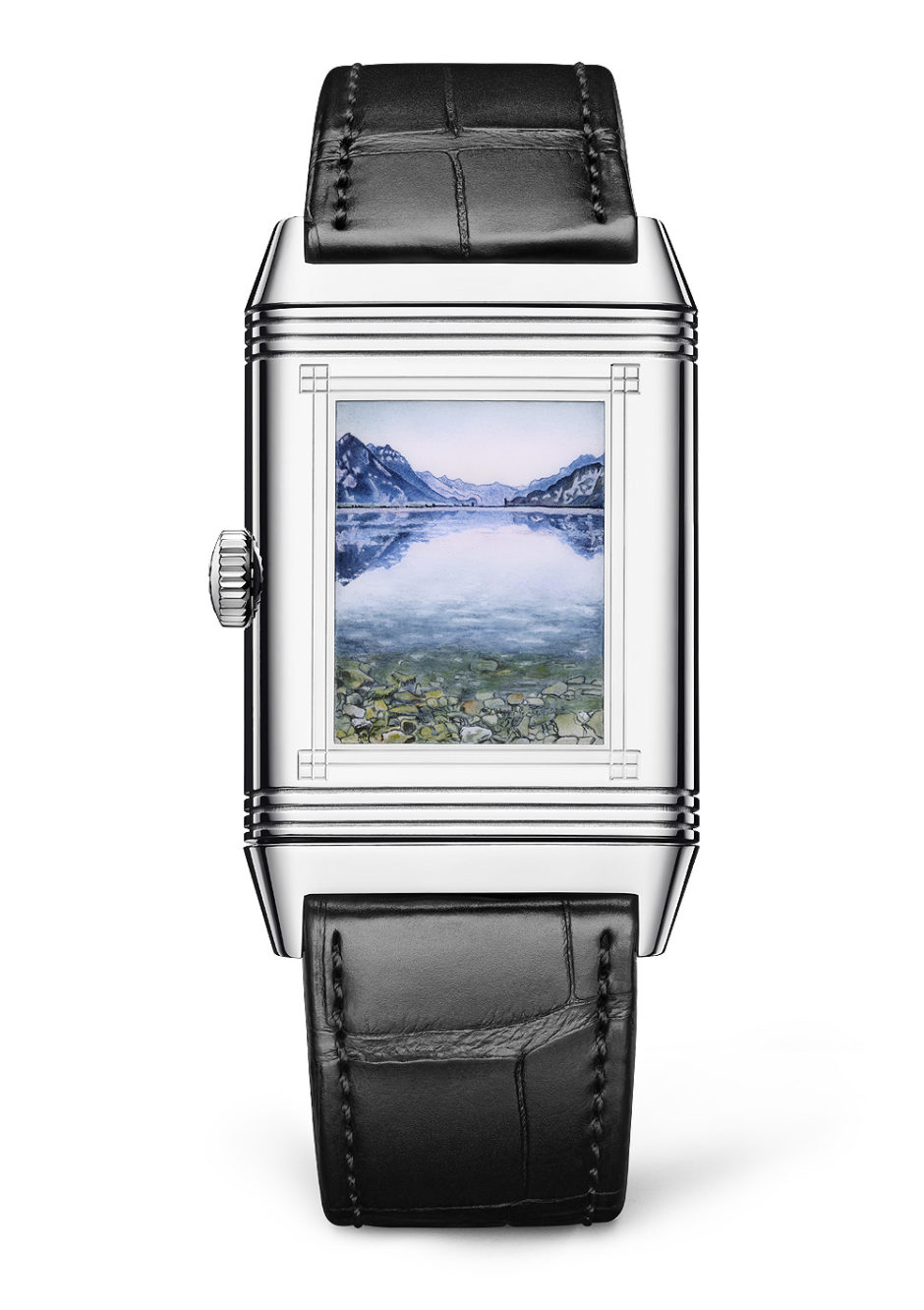 Another depiction of Lake Thun appears on the third watch (below), whose back side depicts the 1909 work, “Lake Thun, Symmetric Reflection.” Here, the reflections of the majestic Swiss Alps create a mirror effect of blue and white shades in water, while the front dial’s enamel finish is in a complimentary shade of sky blue. 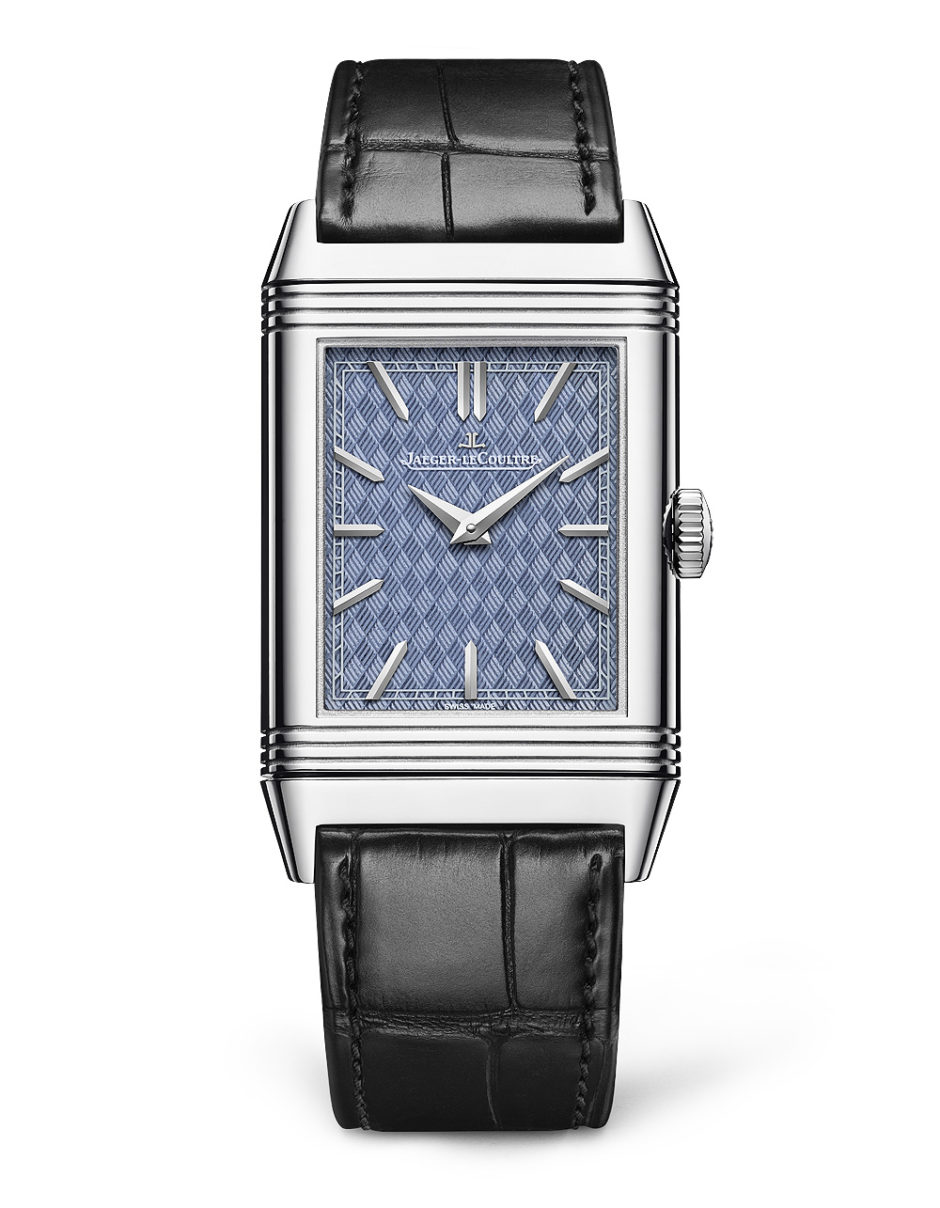 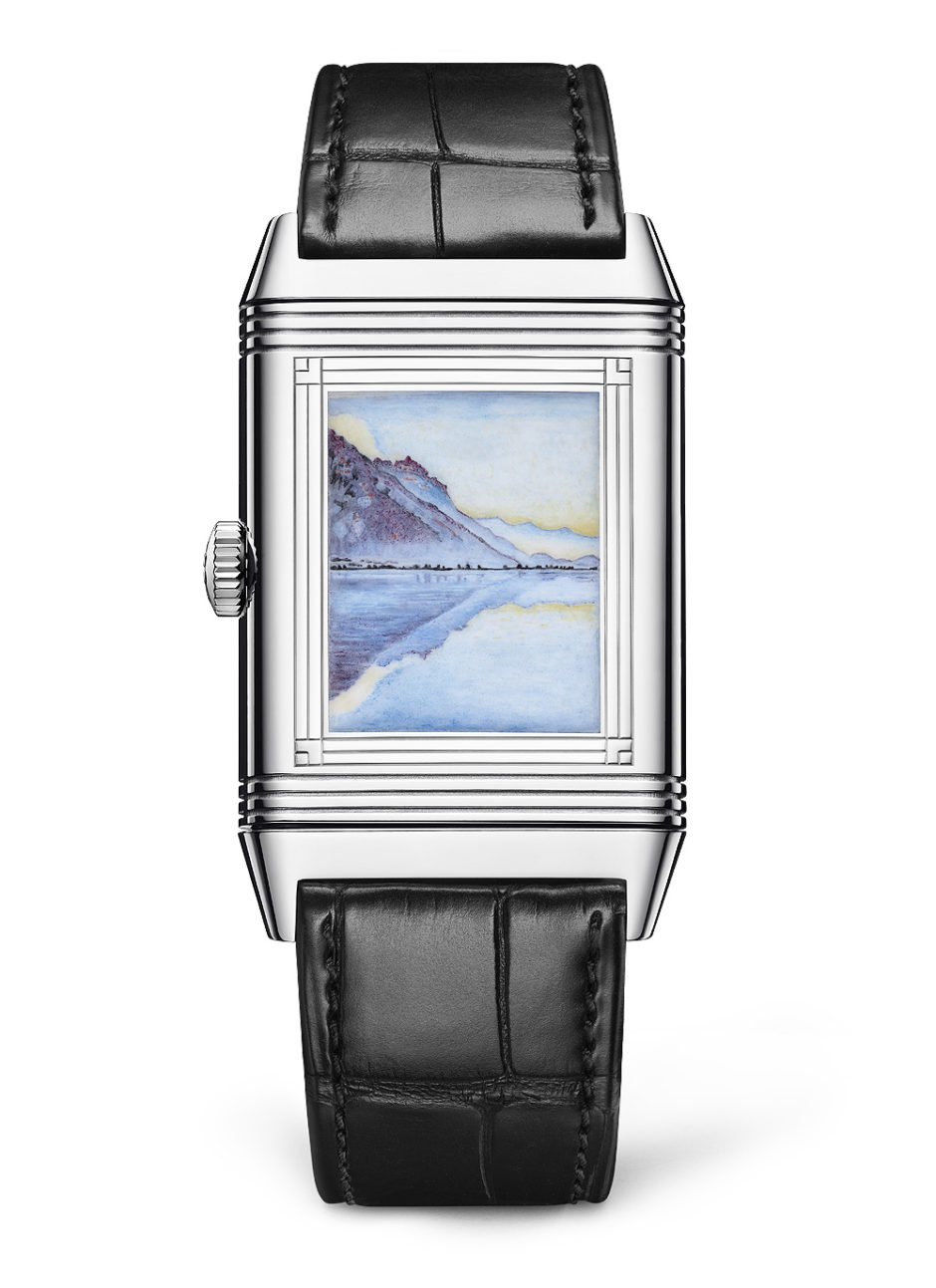 The classical, Art Deco-inspired rectangular case of the Jaeger-LeCoultre Reverso Tribute Enamel is made of white gold and measures 45.5 mm x 27.4 mm in diameter 9.73 mm thick. The dial’s faceted, applied hour markers, Dauphine hands, and railtrack minutes circle are other hallmark elements of the iconic Reverso model. Inside the case beats a Jaeger-LeCoultre manufacture movement, the manually wound Caliber 822A/2. Prices for each of the three eight-piece limited editions are available on request.