At SIHH 2017, Roger Dubuis announced its partnership with renowned Italian tiremaker Pirelli, introducing a special timepiece to kick off the collaboration. This month, at the Geneva International Motor Show, the brand launches another partnership, with another Italian automotive-industry player, bringing out another limited-edition watch. The Roger Dubuis Excalibur Spider Italdesign Edition, limited to just eight pieces worldwide, will be released alongside the “Italdesign Automobili Special,” an ultra-limited series customizable car from Moncalieri, Italy-based Italdesign, a renowned producer of cutting-edge prototype show cars. 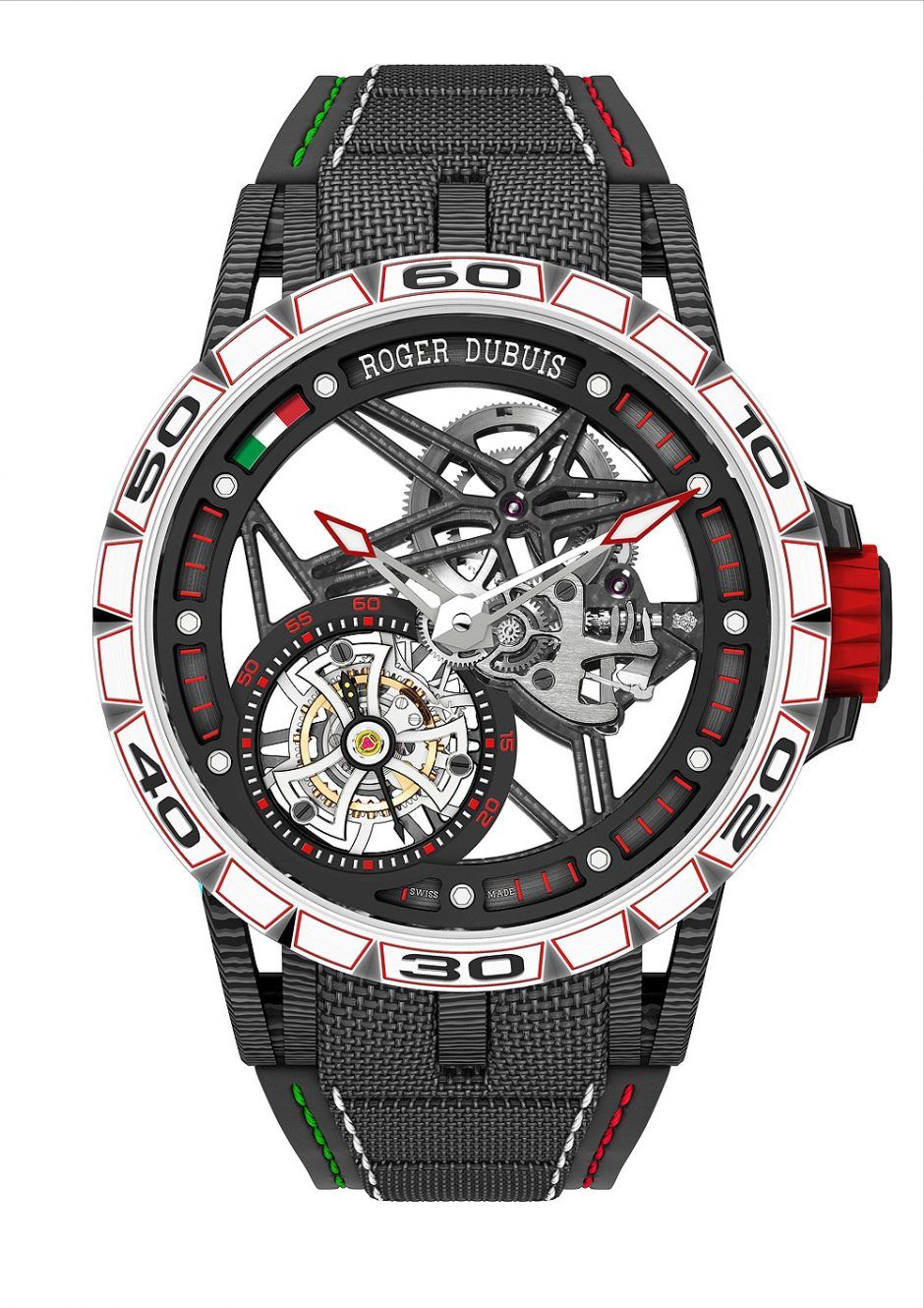 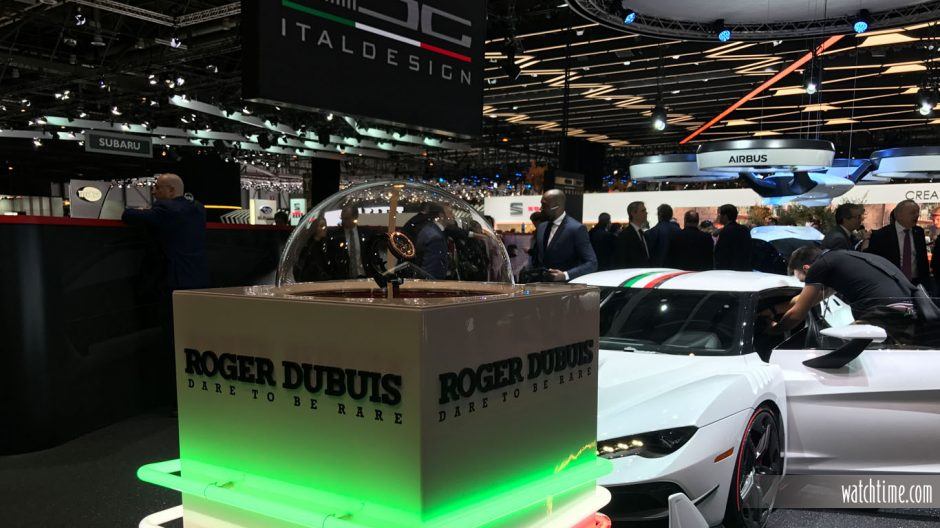 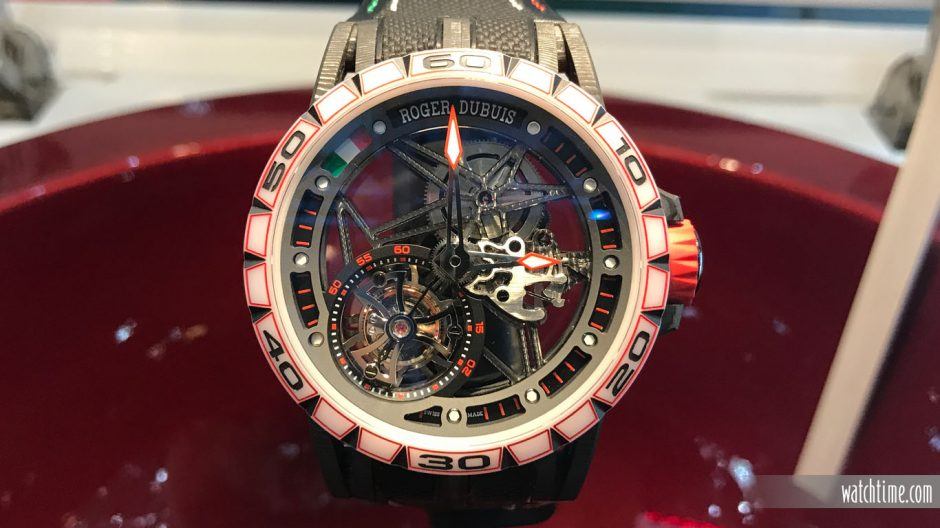 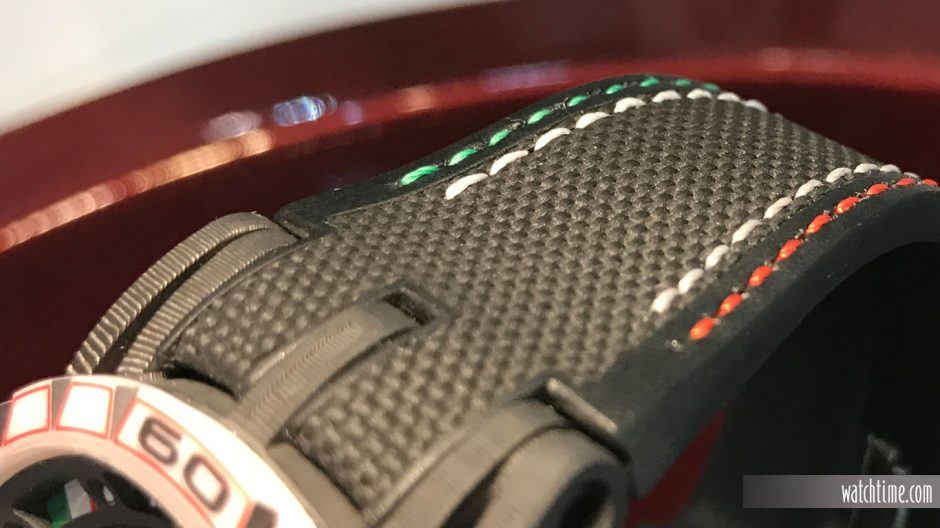 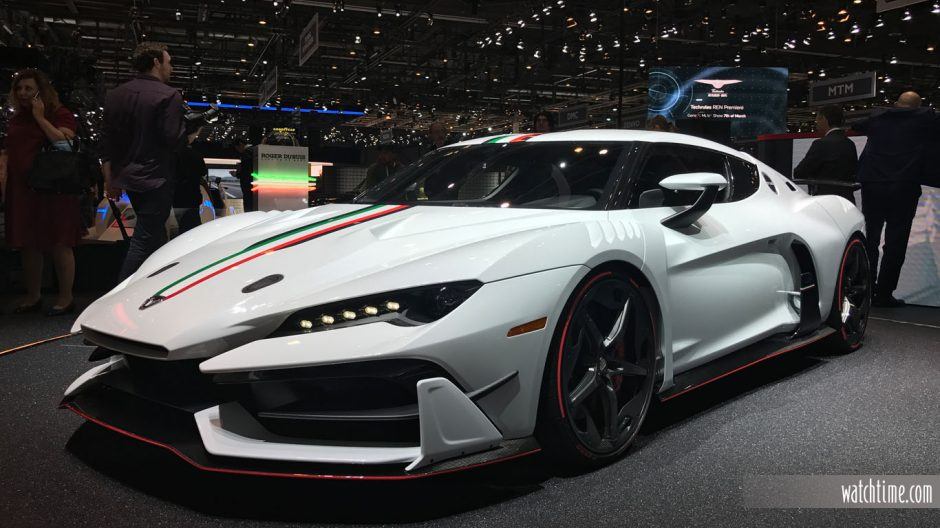 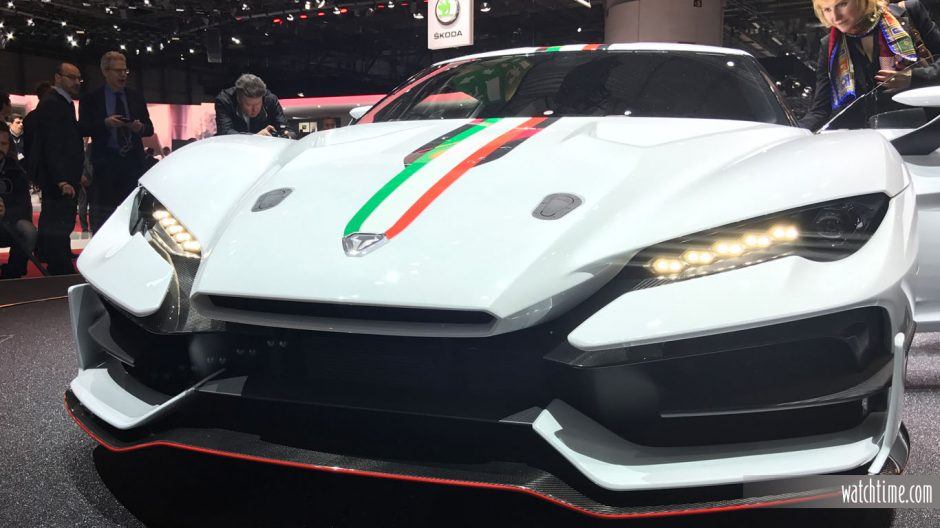 The car that inspired the watch (at the end of the gallery and below) will be limited to only five units, all to be built by the end of 2017. In keeping with Roger Dubuis’s “disruptive materials” ethos, the so-called Italdesign Hypercar has a carbon fiber bodywork and a modular chassis made of carbon fiber and aluminum. With a naturally aspirated 5.2 liter V10 engine, it is capable of 0 – 100 mph acceleration in 3.2 seconds and reaches a top speed of 330 km/h. Consumers can personalize both the interior and exterior of the vehicle.

The Roger Dubuis Excalibur Spider Italdesign Edition — a variation on the brand’s Excalibur Spider Flying Tourbillon — carries on the car’s Italian national colors motif, with red, green, and white highlights on its dial and strap, red-tipped hour and minute hands, and red vulcanized rubber surrounding the black DLC titanium crown. The multi-layer carbon case is 45 mm in diameter, 13.75 mm thick, and water-resistant to 50 meters; the ceramic bezel is decorated with red liquid ceramic and black lacquer decor for the numerals. The caseback is DLC-coated titanium.

Roger Dubuis designs its skeleton movements — like the one in this watch, manual-winding Caliber RD505SQ — in an openworked style from the ground up, rather than skeletonizing an existing movement, as most other brands do. Also notably, it is one of the few Swiss watch brands to have all of its movements stamped with the prestigious Poinçon de Genève (Hallmark of Geneva), a quality seal awarded by an independent bureau in Geneva that judges movements on 12 criteria for quality and craftsmanship.

The Excalibur Spider Skeleton Flying Tourbillon takes the openwork motif a few steps further than most watches in the collection, using skeletonization techniques not only on the movement but also for the case, flange, and hands. The “Spider” reference is to the movement’s complex, sculptural, spiderweb-like architecture, which also incorporates the off-centered “star” motif that characterizes all Roger Dubuis skeleton calibers. Another design motif of the Roger Dubuis Excalibur line is also present: the tourbillon carriage in the shape of a Celtic cross.

The movement, made up of 179 parts and holding a power reserve of 60 hours, earns its Geneva Hallmark with an array of high-end finishes, including a circular-grained plate and côtes de Genève decoration. The flying tourbillon, placed near the 7 o’clock position, makes one rotation per minute. The plates and bridges are coated with NAC treatment; the red tips of the hands are filled with Super-LumiNova.

The Roger Dubuis Excaibur Spider Italdesign Edition is mounted on a black rubber strap with red, green, and white stitching and a black rubber tech inlay; it fastens to the wrist by means of a double-folding titanium clasp with a titanium DLC clasp cover. The eight pieces will be available exclusively in Roger Dubuis boutiques and priced at $169,000.

In this clip you can see the presentation of the watch at the 87th Geneva International Motor Show: