Depending on execution, two-tone timepieces can come off as a striking alternative to your daily wristwear or fall into the domain of over the top and extravagant. Despite the fine line that exists between good looking and gauche, two-tone has emerged as one of 2019’s hottest trends with the halls of Baselworld and SIHH filled with brands looking to spark the next collecting craze. We’ve taken a look at all the latest releases and gathered up six of the most successful two-tone watches to hit the market this year in an effort to add a splash of color to your wrist.

After revamping the Seamaster 300M in 2018, Omega has given the Seamaster 300M Chronograph a similar treatment this year. One of these new releases is a two-tone model in a 44-mm steel case with a 18K Sedna gold diving bezel and a black ceramic insert. The striking piece, with its curvy facets, also uses Sedna gold for the crown and helium valve, and accents the ceramic chronograph pushers with the metal as its screw-down element. The dial of the watch has the series’ signature “waves” design as its background, which are laser-engraved into the black ceramic. Adorning the face are applied rose gold circular hour markers, with smaller rectangles at the 3, 6, and 9 o’clock position, and two large bars indicating the 12 o’clock mark. Towards the bottom of the dial is a 6 o’clock date window, while sweeping over it are the enlarged, skeletonized hands meant to assist in legibility, further complemented by an Omega Seamaster classic in the lollipop seconds hand. Inside the watch and visible through a sapphire case back is the Omega Master Chronometer Calibre 9900, a highly accurate and extremely antimagnetic movement that offers a 60-hour reserve. Price: $9,300. 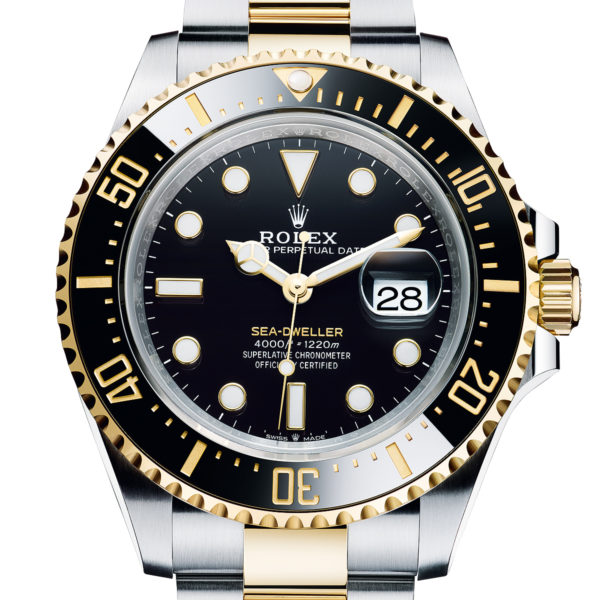 Known worldwide for its incremental approach, Rolex updated the Sea-Dweller dive watch at Baselworld 2019 with the addition of its proprietary Rolesor Gold (a blend of 18k yellow gold with Rolex Oystersteel) in the markings of the Cerachrom bezel, the screw-down crown, the hands, the indexes and the center links of the Oyster bracelet. Many details remain the same since the last time the Sea-Dweller was overhauled in 2017, including the robust water- resistance rating of 1,200 meters. It’s hard to think of another dive watch that can reach those depths while still impressing with its precious metal dressing. Although James Bond always opted for the Submariner during his days wearing Rolex, there is something that feels extremely 007 about wearing a gold-accented dive watch up to 4,000 feet under the sea. Price: $16,050 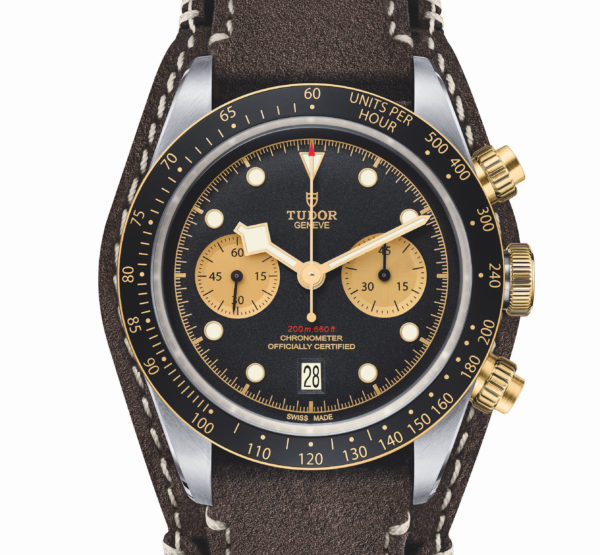 Immediately reminiscent of the iconic Rolex Daytona ‘John Player Special,’ the new Tudor Black Bay Chronograph in steel and gold offers a bold alternative to previous BB chrono designs. The watch uses a 41-mm case just like the original chronograph from 2017, but it is now slimmer by more than a millimeter. The black dial has a bi-compax layout with the counters in champagne gold. There’s a dash of red on the dial, thanks to a red-tipped gilt central chronograph seconds hand, and the depth rating print which is also in red – a nod to the Tudor designs of the 1950s. Caliber MT5813, the result of the brand’s continued collaboration with Breitling powers the watch. Tudor has considerably modified the movement to make the caliber its own such as with a silicon balance spring in the escapement. Pricing starts at $5,600 for the bund strap option and goes up to $6,800 on the three-link bracelet in steel and gold. 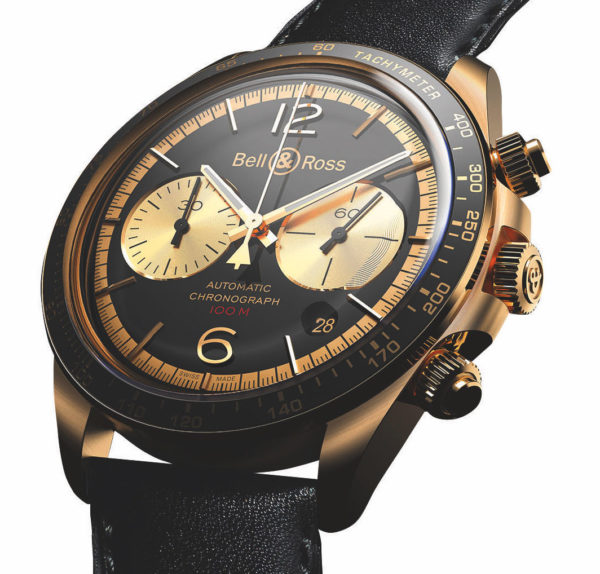 Limited to 999 pieces, the latest Bellytanker from Bell & Ross offers a new livery for the popular design now coming in a bold black-and-gold look; however, rather than rely on the expense of a precious metal, Bell & Ross made the smart – and trendy – choice to utilize the warm tone of bronze for its new release. The Bell & Ross BR V2-94 Bellytanker Bronze comes in a 41-mm case that is the same as the previous Bellytanker chrono- graph released in 2017. In fact, most of the details – other than the choice of bronze for the case and bezel and the black dial with champagne/gold accents – carry over from the 2017 release. Inside the watch is Caliber BR-CAL.301 that uses the workhorse ETA 2894-2 as its base movement. Price: $4,990. 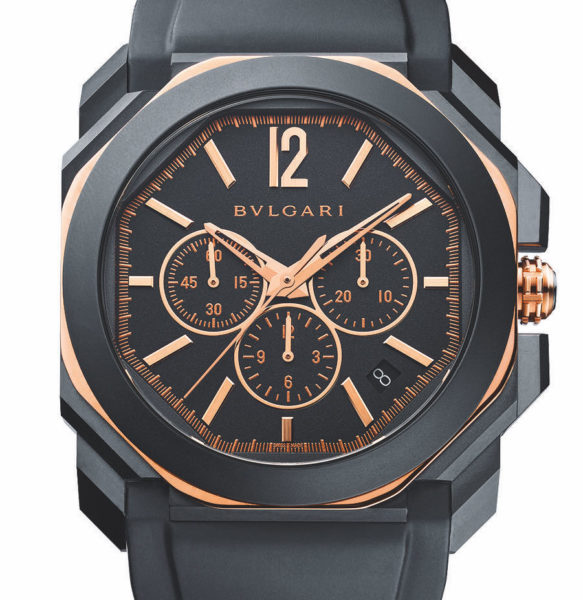 The Bulgari Octo l’Originale collection uses the recognizable case design of the ultra-thin Octo Finissimo series but differentiates itself through an overall thicker style and often more accessible pricing. Earlier this year, the Roman-born brand revealed the Octo l’Originale Chronograph in an eye-catching dressing of black DLC and gold. The case is made of sandblasted steel and has gone through a black DLC treatment while the gold accents include both the crown and the octagonal plate surrounding the dial. While the watch is largely identical to the titanium version released in 2018, Bulgari decided to remove the tachymeter scale that appeared on that model to make the new watch’s appearance slightly sleeker, and much more luxurious. Inside the watch is the automatic BLV328 Velocissimo caliber, better known as the legendary El Primero from Bulgari’s LVMH stablemate Zenith. Price: $11,800.

The Oris Sixty-Five Diver is a fan favorite for a reason. It’s a great-looking watch that is known as one of the better value propositions in the industry today. At Baselworld 2019, the Hölstein-based brand updated the neo-classic watch with a full bronze bezel insert laid on top a stainless-steel bracelet. Oris already enhanced a version of the Sixty- Five Diver with a bronze bezel last year, but the two-tone effect was minimal compared to today’s version. Combined with the deep blue dial that recalls the depths of the ocean, the Sixty-Dive Diver “BiCo” is another strong example of what Oris is doing right in building out its dive watch family. Powering the watch is the Oris 733 movement that is based off of a Sellita SW200-1. The watch is priced at $2,350 on the two-tone bracelet (the center links are made of bronze), but there’s also an option with a leather strap at $2,100.

No Responses to “Two-Tone Tendencies: The Hottest Bicolor Watches of 2019”