Hot on the heels of the fan-favorite Carl Brashear Chronograph, Oris has released three previously unseen models at Baselworld 2018. We have new updates to the Divers Sixty-Five, the ProPilot collection, and two updates to the Big Crown.

Oris has gone all in on the bronze trend, with two new Sixty-Five models, one in 40 mm and one in 36 mm, that feature a bronze ring around the bezel. It’s slightly smaller than previous Sixty-Five models at 40 mm, but is overall similar to previous editions of the Sixty-Five. It shows that Oris is listening to consumer feedback and presenting a product that enthusiasts both appreciate and is able to stand on its own in a sea of vintage-inspired divers that have proliferated through the market over the past three to four years. Both new models use a modified Sellita SW 200-1 movement — dubbed the Oris Caliber 733 — with a date at 6 o’clock. This new Sixty-Five should help quench the thirst for the extremely popular and limited Carl Brashear line. It’s a move that makes a lot of sense, both for the brand and the consumer.

What’s really interesting here is the new 36 mm diver. Last year during Baselworld, we saw Rado make waves with the 37.5 mm Captain Cook. This year, Oris has followed suit with a smaller model that is more authentic to the vintage aesthetic. This is a model that can easily switch between genders and is definitely appealing to someone who appreciates the trend of embracing smaller men’s sizes. 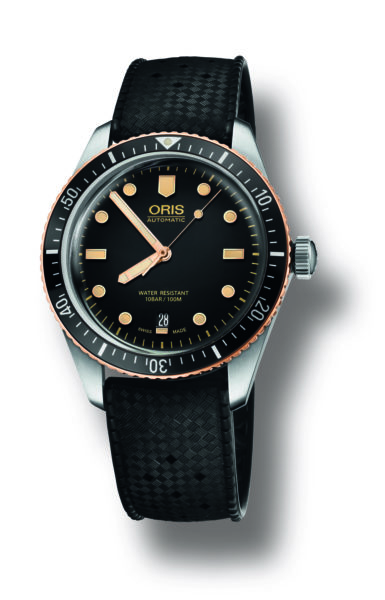 Both models are priced at CHF 1,950 on a strap and CHF 2,150 on a stainless steel bracelet. They will be available in April, coinciding with the official retail arrival of the Carl Brashear Chronograph.

The Big Crown ProPilot Caliber 114 is the latest release within the ProPilot collection. This new model serves as the introduction for the brand’s latest in-house developed caliber. The big news here is the power reserve. At 10 days, this is one of the heartiest movements the brand has come out with. The patented non-linear power reserve indicator, oversized crown, and faceted bezel (inspired by jet engine blades) are all here like previous ProPilot models but the watch includes a new addition: a 24-hour second time zone with half-hour indication. This is the first time this has been done by a Swiss brand in a mechanical timepiece. While this might not be the most useful for those that tend to stay in the Western hemisphere, if your summer includes jaunts between India and Australia, half-hour indications can come in mighty handy.

Interestingly, the base for the Caliber 114 uses the same architecture as Calibers 110 through 113. How the ten-day power reserve was possible was through the introduction of a single oversized barrel. The power reserve indicator — which boasts greater accuracy as the days go by — is controlled by a handmade worm gear designed specifically for Oris’s movement suite. 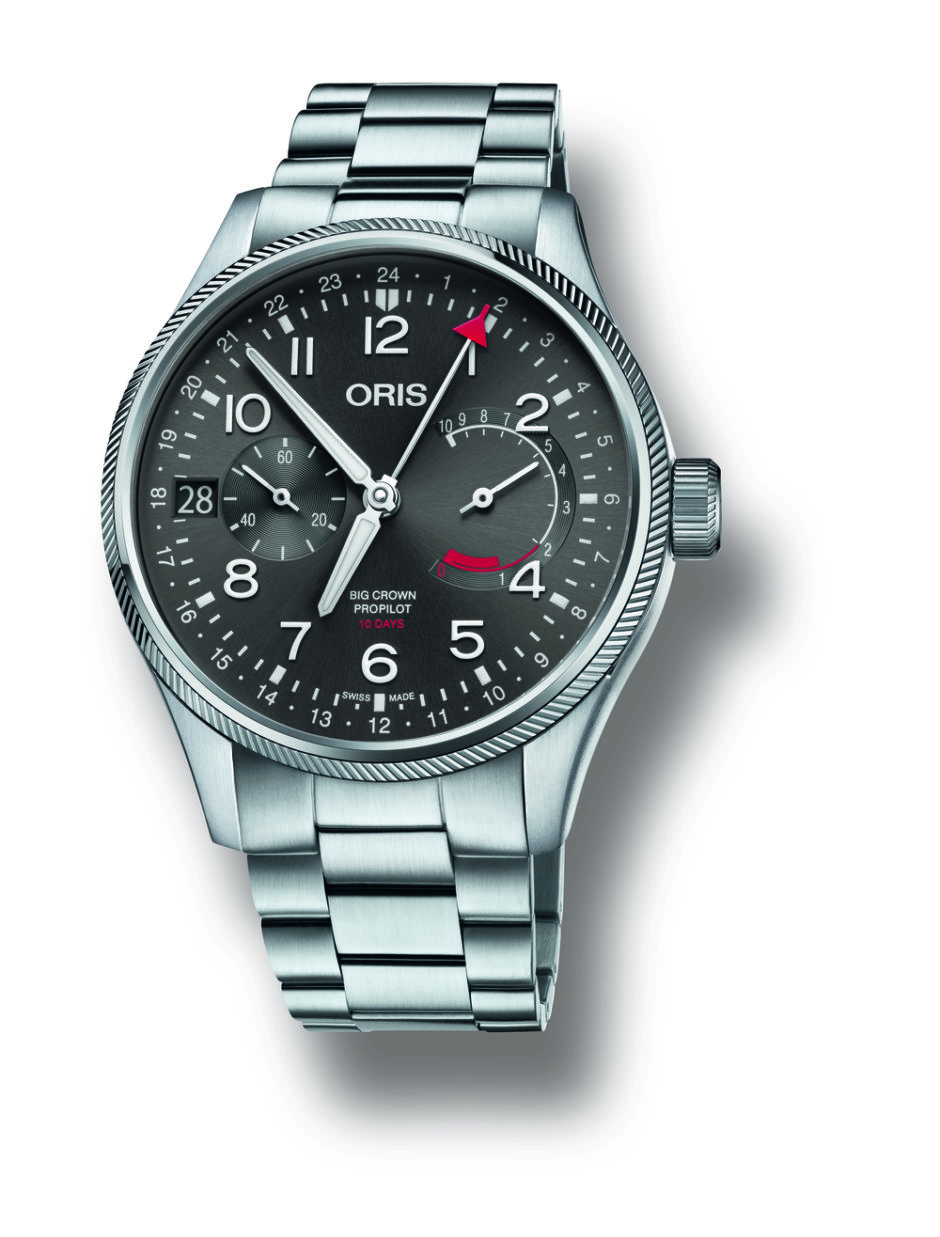 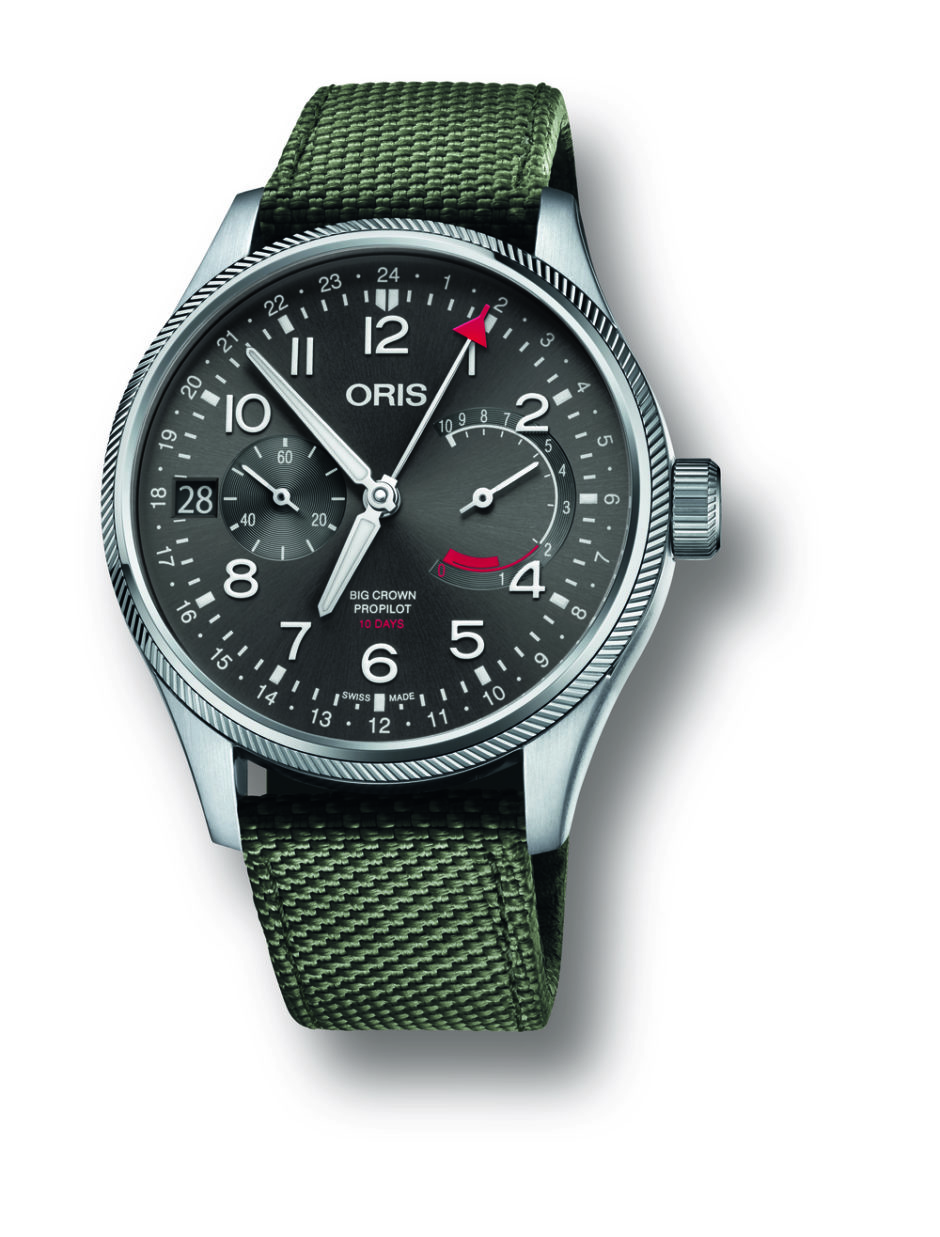 A few months back, I had the opportunity to see most of these new Oris models in person. I appreciated the Carl Brashear Chronograph as much as anyone else and really did enjoy the dial sheen on the Clipperton Limited Edition. The balanced look of the GMT Rega LE was something enjoyable to see in the metal as well. Walking out from that meeting, however, the model that spoke to the most was the new Big Crown Pointer Date.

Originally introduced in the 1980s, the first Big Crown Pointer Date helped bring back mechanical watchmaking to the Oris manufacture. It quickly became a best seller for the brand and was highly recognizable thanks to the smooth case, tapered lugs, coin-edged bezel, oversized crown, and central date pointer hand. The new Pointer Date for 2018 has been reworked for a more modern palate. The Oris team slimmed up the case to make it more business appropriate and added a bubble-curved sapphire crystal. There are two sizes here, 36 and 40 mm, and multiple different color options. Referencing the cherished Swiss-French architect/designer/writer Le Corbusier’s Polychromie Architecturale school, there are two distinct versions: one in light green (think minty) and a gray-blue that works really well with the bright red tip of the pointer hand. 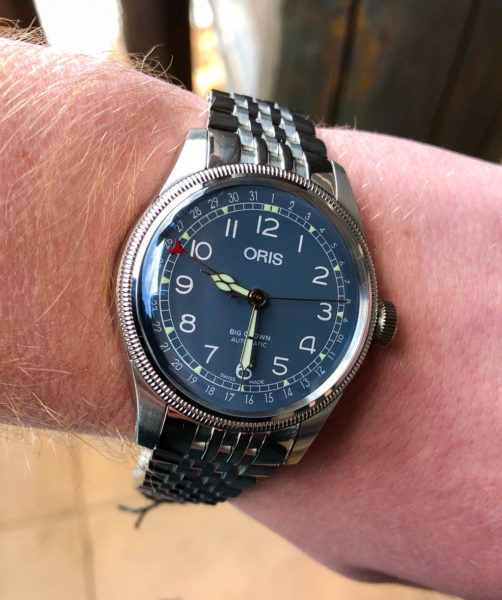 That’s not all — Oris is also introducing the pointer date in a bronze version. Ramping up the vintage love, this version only comes in 36 mm and the faded green color. It’s without-a-doubt aimed at women, which is great as I can’t think of another bronze ladies’ watch currently on the market.