One of the keys to success for any budding watch brand is its hook. That hook has to be something that makes you look up from whatever is currently occupying your prized wrist real estate and say, “Ooh, I like that.” That initial hook varies from person to person and can depend on a watch’s size, its material, the dial layout, the presence or absence of a complication, whether or not the watch has a date window, or any other innumerable detail that no one in their right mind should care about. But, as anyone who has plunged into the depths of horological esotericism will tell you, these details are pretty much the only thing that matters when it comes to building a serious watch collection.

The hook is that initial moment of attraction that sparks the gestation period of whether or not you actually want to purchase a watch rather than just flirt with the idea. And for a young brand to be successful, it’s something that must be taken into account. It’s also something that Reservoir Watches, a new Swiss brand that comes by way of Paris, has in spades.

The hook for Reservoir is quite straightforward and is focused on a dueling complication for the time display. Hours are indicated via a digital aperture in the lower hemisphere of the dial that physically “jumps” when the minute hand strikes 60. The minutes are read courtesy of a retrograde display that stretches around the periphery of the upper two-thirds of the dial. A power-reserve display is located directly underneath the hour window at the bottom of each dial that uses either a hand or a sequence of three-dimensional spheres to indicate how much autonomy is left. In some models, including our test watch, a date window is placed to the right of the power reserve. 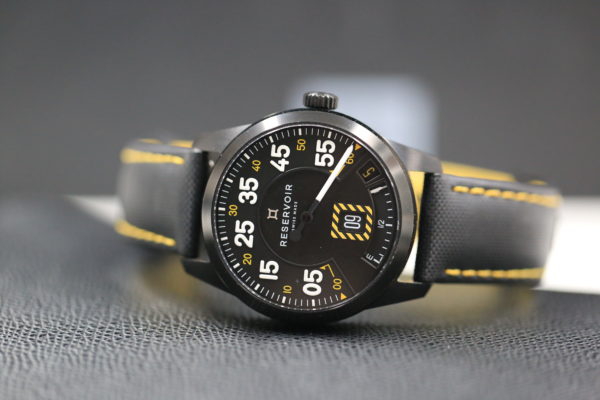 This dial layout, meant to recall dashboard instruments, is consistent throughout all of Reservoir’s various collections that lean on either automotive, avionic or nautical motifs to stand out. The car-inspired designs are the most prevalent and come in three differensubcollectionsns: Longbridge, GT Tour, and Supercharged. The airplane-influenced models are split into either the Airfight or the Airfight Jet, and the nautical-enhanced models include the Hydrosphere dive watch that was released at Baselworld 2019 and the submarine-influenced Tiefenmesser and Tiefenmesser SH ranges.

Although Reservoir was officially launched in 2016, my first encounter with the brand was at Baselworld 2018. I was previously unaware of this young French/Swiss company and was initially wary that its timekeeping display would come off as more of a gimmick than an authentic approach. After wearing one of the models off and on for a three-week period earlier this year, I can safely say that Reservoir’s concept falls securely on the “authentic” side of things.

Our test watch was the Reservoir Airfight Jet, a timepiece that was released in late 2018 and falls within the aeronautical category for the brand. While in the other collections like the Longbridge there are options that come in at 39 mm, the Airfight Jet is only offered in a 43-mm, stainless-steel case coated in black PVD with a satin and polished finish on its exterior. Although 43 mm is a larger diameter than I typically prefer, the watch is surprisingly wearable thanks, in part, to the short lugs that contour nicely to the wrist. The dial, in eye-catching black and yellow, offers heightened legibility due to the oversized Arabic numerals that land on the halfway point of every 10 minutes. These six large indexes are enhanced with Super-LumiNova along with the hour hand.

The dial itself is segmented into multiple sections. The outer periphery where the minutes display is found is slightly raised from the rest of the dial and features a smooth texture around the minute dashes and numerals. The rest of the dial is slightly recessed and has a grained finish surrounding the different apertures. The jump hour is framed by a diagonally striped box in yellow and black that references Battenburg markings or cautionary tape. Unfortunately, one of my few issues with the Airfight Jet’s execution can be found here due to the lack of luminescent material on the jump hour numerals.

Inside the case is a workhorse ETA 2824-2 automatic movement that features a 124-piece module that was developed by the manufacturing firm Télôs and is exclusive to Reservoir. The 37-hour power reserve, which is about an hour shorter than you’d expect a 2824 to run, loses a bit of its autonomy due to the addition of the module, which takes up extra energy. Although this reserve is a little shorter than some would like, the inclusion of the power-reserve indicator acts as a solid reminder of when the watch is actually running since there is no seconds hand. The jump hour functioned as expected during my time with the watch and the action of the retrograde minute was crisp and automatic. The module also offers some additional protection through a special clutch that protects the movement from damage just in case the crown is set in the wrong direction and the minute hand pushed past the zero marker. Although the watches are conceptualized in the heart of Paris, they are hand assembled in La Chaux-de-Fonds, Switzerland.

Covering the dial is a sapphire crystal that has been coated with anti-reflective material. Flipping the watch over offers a partial view of the movement and oscillating weight thanks to a 240-degree opening that matches the retrograde minute display on the dial side. Although the water resistance rating is only specced to 50 meters, the fluted screw-down crown allows for greater reassurance when the watch is submerged.

Dashboard references aren’t exactly rare in watch design these days. Many brands have cut their teeth on this look and have done it in great and unique ways. Rather than fall into the trap of mimicking the tried-and-true territory of larger brands like Bell & Ross, Reservoir has approached the appeal of a dashboard callback in an authentic way that resembles the one-handed display of various measurement instruments.

But it’s also because of this “hook” that limits where a Reservoir watch can be worn. It’s hard to picture wearing the Airfight Jet, or even the slightly subtler Longbridge model that is inspired by the dash of a Mini Cooper, to the office on a daily basis. That doesn’t mean it isn’t a fun watch with interesting complications, however, it does limit its appeal on a broad sense. With that in mind, it’s worth mentioning that other than a few vintage models from makers like Gérald Genta, Enicar and Caravelle, Reservoir’s releases are the most affordable way to get a retrograde minute/jump hour combination on the wrist.

In short, Reservoir watches are timepieces that can appeal to the collector that has everything. They also make an enjoyable addition to a growing collection. I can clearly imagine strapping the Airfight Jet on my wrist on Friday afternoon and having a hard time taking it off come Sunday evening. The excitement that comes with anticipating the instantaneous action of the retrograde minute hand in combination with the jump hour can’t be underestimated. Because of this and the general quality of the product, I can safely say that anyone who has ever been fascinated by that very specific kinetic movement will be satisfied by what Reservoir has to offer. 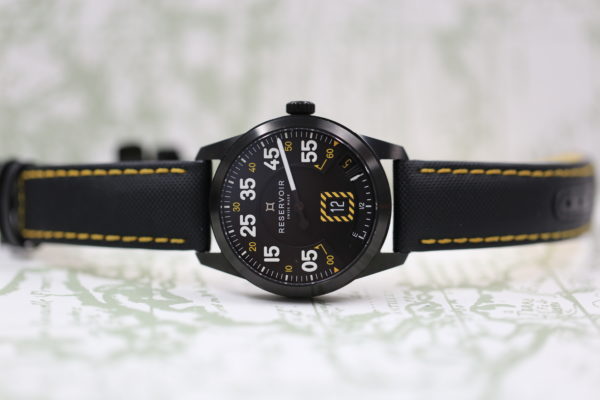 The Reservoir Airfight Jet comes on a black canvas strap with yellow stitching to match the dial and a black PVD, stainless-steel butterfly folding clasp. The strap features quick-release spring bars to easily swap it out with the black-and-yellow striped Nato strap that comes as a bonus. It’s priced on the higher side for the brand at $4,050; pricing for other Reservoir models starts around $3,600

No Responses to “Borrowed Time: Hands-On with the Reservoir Airfight Jet”