As we approach the end of 2017 and prepare for a new year of watch releases in 2018, we wanted to take a look back at some of the most noteworthy timepieces that came out this year. Check back each day this week for a new list focused on everything that 2017 had to offer. — The WatchTime editors

No watch collection is complete without a timepiece featuring a moon phase. That single romantic complication inspires countless collectors with its level of detail and the importance of its astronomical function. Similarly, perpetual calendar watches have an innate accuracy that provides a useful addition to any personal horological reserve. Regardless of which you prefer, this year had plenty of remarkable moon phase and perpetual calendar timepieces to drool over.

Breguet based some of the aesthetics of its Classique 7787 Moon Phases wristwatch on a historical Breguet pocket watch, no. 92, which dates to 1785. Among the vintage-inspired details are the power-reserve scale, decorated with small arrows, and the minuscule stars used to represent the minutes, with five-minute intervals marked by stylized fleurs-de-lis. Released this year in an 18k white gold case, measuring 39 mm in diameter and featuring the delicately fluted caseband characteristic of models in Breguet’s Classique collection, the watch features a Grand Feu enamel dial that hosts central hour, minute and seconds hands, as well as two complications: the age and phases of the moon in an aperture at 12 o’clock and the aforementioned, unconventional power-reserve indicator at 3 o’clock, with an elegant, elongated hand indicating the watch’s remaining energy on a 1-to-38-hour scale. Inside the case, and visible through a clear sapphire caseback, is Breguet’s manufacture Caliber 591DRL, a self-winding mechanical movement only 3.02 mm thick. It stores its 38-hour power reserve in a double barrel and includes an escapement and balance spring made of silicon — a material Breguet uses for its extreme lightness, improved shock resistance, antimagnetic properties, and lack of need for lubrication. You can learn more here.

The Glashütte Original Senator Excellence Perpetual Calendar combines the time, weekday, month, and leap-year indications of a traditional perpetual calendar with the Saxon manufacture’s own finely worked moon phase display and its well-known Panorama Date feature. Discreet correctors in the sides of the 42-mm case enable easy adjustments to the weekday, month, and moon phase displays, while another “universal” corrector sets or changes the day, date, and month together. The various timekeeping and calendar elements are arranged in elegant symmetry around the varnished, silver-grained dial. The watch’s movement is Caliber 36-02 — the base Caliber 36, introduced in the brand’s original Senator Excellence models in 2016, with an in-house-made perpetual calendar module. The case is water-resistant to 50 meters and its dial hosts laser-cut, galvanic black indices (Roman numerals at 6 and 12 o’clock) and a classical railroad chapter ring. In a bit of aesthetic subtlety, the leap year “4” numeral and the minute numerals are printed in black on the stainless steel model and in red on the rose-gold watch. Both versions have striking, traditionally blued hands for the hours, minutes, and seconds. For more details and to see other versions of the watch, read our report from Baselworld 2017.

The Jaquet Droz Grande Seconde Moon incorporates an astronomical moon phase indicator into the elegant figure-eight dial design characteristic of the Grande Seconde collection. Requiring adjustment only once every 122 years and 46 days, the specially developed moon phase mechanism has a carefully studied gear ratio that makes it much more precise than the 59-toothed mechanism in a traditional moon phase, which accumulates an error of one day in approximately two years, seven months, and 20 days. The upper subdial — whose design varies slightly according to the version — discreetly displays the hours and minutes. Like last year’s Grande Seconde Dual Time, the Grande Seconde Moon will be available with three dials and two case materials — two steel-cased models, one with a silvery opaline dial, the other with a black onyx dial; and one model in an 18k rose gold case, with an ivory enamel dial. The cases measure 43 mm in diameter. The moon phase disk, nestled inside the circular scales for the seconds and the hand-type date indicator, is made of either blued steel (in the silvered and ivory enamel dial versions) or onyx (matching the dial material of the other steel model), with tiny gold stars and a realistic-looking gold moon that rotates clockwise in tune with the actual lunar cycles. The double-level structure of the dial aids in legibility, while a corrector positioned in the side of the case at 8 o’clock — operated by a stylus included with each watch — makes adjustments of the moon phase easy. All versions of the Jaquet Droz Grande Seconde Moon are on leather straps and equipped with self-winding mechanical movements. You can find more information here. 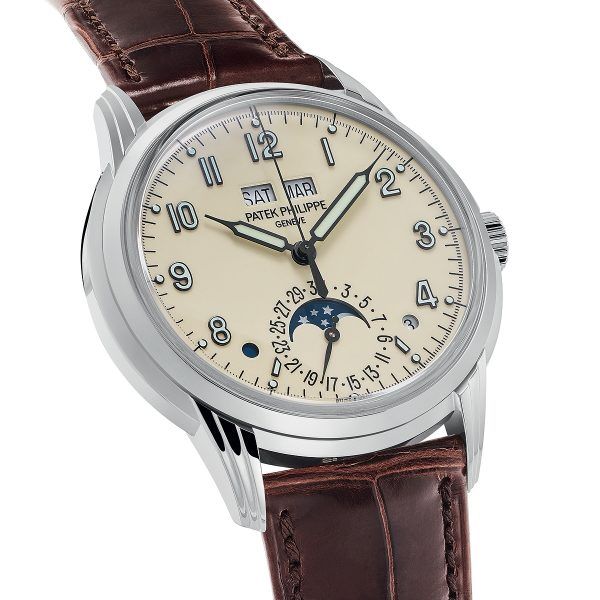 Patek Philippe, which famously gave the world its first wristwatch with a perpetual calendar in 1925, reached into its prestigious history with that complication to inspire the new Ref. 5320G Perpetual Calendar. Patek first integrated the perpetual calendar wristwatch into its regular collection in 1941 with the introduction of Ref. 1518, a watch that combined a perpetual calendar with a chronograph. A year later, Ref. 1526, a model without a chronograph function, debuted. Both pieces pioneered the distinctive dial design that still today defines Patek Philippe’s perpetual calendar timepieces: a double aperture directly below 12 o’clock for the day and month displays, and a subdial at 6 o’clock with a moon phase indicator surrounded by an analog date display. This watch, with its historical-looking cream-colored lacquer dial, adds a few new, subtle elements to this classical layout: a small, round day-night aperture between 7 and 8 o’clock and a round aperture for the leap-year cycle, with Arabic numerals from 1 to 4, between 4 and 5 o’clock. The watch’s manufacture movement is Caliber 324 S Q, based on Patek’s self-winding Caliber 324, which is powered by a large rotor in 21K gold. Like all modern Patek Philippe calibers, this one not only boasts an array of Haute Horlogerie decorations and finishes but also meets the strict precision and quality criteria of the Patek Philippe seal, meaning, among other things, that its maximum rate deviation ranges between -3 and +2 seconds per day. The 40-mm white gold case features a sapphire caseback to display the movement as well as a boxed crystal over the dial and historically inspired three-tiered lugs. For more on the watch, its price, and the history behind it click here.

Rolex introduced the newest model in its elegantly appointed Cellini collection, the Rolex Cellini Moonphase, at Baselworld. The watch features a patented, astronomical moon phase function (the first moon phase in a Rolex watch since the 1950s), a meteorite-appliqué moon, and a 39-mm case made of Everose gold, a proprietary alloy that mixes gold, copper, and a touch of platinum, and sports a polished finish. The case features the double-domed, fluted bezel that is a hallmark of the Cellini collection and a screw-down crown for a water-resistance of 60 meters. Its white lacquered dial, with rose gold hands and hour appliqués, opens up at 6 o’clock to reveal a blue enameled disk displaying the full moon (represented visually by a round fragment of rhodium-plated meteorite applied to the disk), the new moon (represented by a thin, silver ring), and a field of stars. The pointer at the 12 o’clock position on this subdial points to the correct moon phase as the two moons rotate through the lunar cycle. Along with the phase of the moon, this watch also displays the date with a crescent-tipped blued hand pointing to a 1 -through-31 scale printed around the dial’s circumference. The movement driving all of these functions is Rolex’s manufacture Caliber 3195, with a patented module for the moon phase indication, which is engineered to be astronomically accurate for 122 years. The watch is offered on a brown leather strap with an adjustable “Crownclasp” fastener. For more details, photos, and prices click here.

When IWC released the Aquatimer Perpetual Calendar Digital Date-Month Edition “50 Years Aquatimer” back in the fall, the Schaffhausen-based brand was not only commemorating the 50th anniversary of its Aquatimer divers’ watch in grand style, but also punching its ticket to the exclusive (but steadily growing) club of watch companies that have introduced new materials into watchmaking. The new material in question is called Ceratanium, and it is — as one might glean from its name — a composite of ceramic and titanium, boasting the hardness and scratch-resistance of the former while also retaining the latter’s lightness and toughness; its distinctive matte-black surface also scores high for skin tolerance and corrosion resistance. IWC’s materials experts spent five years developing this alloy, and the desired result was achieved in time to debut it on this special edition celebrating the half-century mark for the Aquatimer, a pioneer among dive watches when it debuted in 1967 with its 200-meter water resistance and internal rotating bezel. The combination of ceramic and titanium in a new composite material is also apt, as IWC played a major role in bringing both materials to watchmaking in the 1980s. The watch’s matte-black Ceratanium case is 49 mm in diameter and 19.5 mm thick, with a convex sapphire crystal over the dial that has been treated with a nonreflective coating on both sides. Like all models in the Aquatimer collection since its revamp in 2014, it features an external/internal rotating bezel for setting dive times, paired with IWC’s proprietary SafeDive system, which ensures that the internal bezel can only be adjusted once the external bezel is rotated counterclockwise, thus preventing accidental movement of the dive scale and adding an extra layer of protection for a diver keeping track of his air supply underwater. The black rubber strap is outfitted with a quick-change system that enables the wearer to easily swap it out with another strap. The dial, which is also predominantly black, with white and red highlights, displays this timepiece’s array of complications. The date and month are indicated in large numerals in the style of a digital watch, and because the watch is a perpetual calendar, it automatically recognizes the different lengths of months and even leap years, so no adjustments will need to be made to the date until 2100, provided the watch is kept running. In addition to the perpetual calendar, the watch is equipped with a flyback chronograph function, with elapsed hours and minutes tallied in a single subdial at 12 o’clock. The movement that drives all of these functions is IWC’s manufacture Caliber 89802, which for this timepiece has had several of its components — including its winding rotor — finished with a black coating to harmonize with the overall matte black look. Visible behind a sapphire exhibition caseback, this self-winding movement has 51 jewels, a 28,800-vph frequency, and a 68-hour power reserve. Everything else you need to know can be found here.