2012 is the year of the pilot’s watch at IWC. With five new models, the Top Gun collection establishes itself as an independent formation within the IWC Pilot’s Watch family. The year’s high-flyer is the Top Gun Miramar: a tribute to the place in California where the myth of the elite pilots was born. Find wallpaper images inside.

“For the new Top Gun Pilot’s Watches we drew on our long tradition of manufacturing unusual deck watches. In the 1940s, Pilot’s Watches made in Schaffhausen were widely used as so-called B watches for flight navigation,” explains IWC CEO Georges Kern.

Kern continues: “Since the main priority for navigation is optimum legibility of the seconds and minutes, these two were often the only indicators shown on the outer ring; the hours would be relatively small and appeared on a central ring. This particular detail inspired IWC’s designers to display the hour circle and the chapter ring separately on the dials of the Big Pilot’s Watch Top Gun Miramar.”

Careful thought was given to the aesthetics. The gray ceramic case and the matte anthracite dial combines to produce a tough yet refined military look. Camouflage colors such as beige for the hands and chapter ring, together with green for the strap, heighten the effect.

The textile strap borrows from tough fabric webbing belts. It is complemented by two high-tech materials, typical for Top Gun, that were introduced to watchmaking by IWC as early as the 1980s: zirconium oxide for the case, along with titanium for the controls and the watch back.

The images below may be enlarged significantly with a click.

No Responses to “IWC Schaffhausen Takes Off at SIHH”

END_OF_DOCUMENT_TOKEN_TO_BE_REPLACED 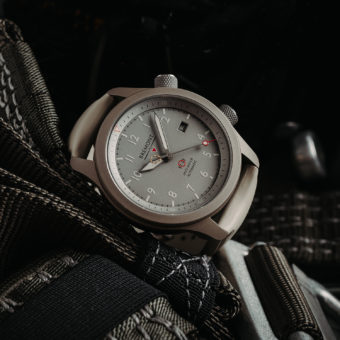 Desert Commando: Hands-On with the Bremont ...