Editor’s Note: Today, we’re introducing a new bi-weekly series focused on highlighting the profusion of independent small-scale brands in today’s watch marketplace. Over the past decade, this arena has soared in interest thanks to social media, value-focused watch blogs, and the proliferation of watch forums. This column will give WatchTime readers and subscribers a chance to look through the marketing fog and see which microbrands are worth the buzz. The articles that appear in the “Microbrand Monday” series will vary in format, from hands-on reviews to interviews, announcements, and brand introductions.

When Sébastien Muller, a fourth-generation watchmaker from Porrentruy, a hidden town in Switzerland’s Canton of Jura with a storied watchmaking history, hit the age of 40, he had to make a choice. Either he was going to go the rest of his life living in anonymity and making watches for other brands or he could spend it building a product that he, and his family, could be proud of.

With his goals set on producing a Swiss watch that could showcase his skills while still appealing to a broad audience, Muller founded Brellum, and released his first watch, dubbed the Duobox, in 2017. The Brellum name has a lot of significance to Muller — it’s an amalgamation that combines both his home village of Bonfol and an anagram of his surname. It also bears a distinct resemblance to the Latin word “bellum,” which translates to “war.” Muller states on his website that this is a reference to the “combat that each one of us experiences in our own way but [remain] guided by our convictions throughout.” To me, it sounds like a constant reminder of Muller’s choice to create his own brand according to his principles, rather than staying in a career where he had to produce watches he didn’t love.

Near the end of 2017, Muller introduced his second model, the Brellum Pandial, which is effectively an updated and improved Duobox with the ever-so-popular, black-and-white Panda dial configuration. This is the model that Muller sent to me for review. (It’s worth mentioning that all my communications have been directly with Muller himself, as he and his wife, who serves as technical director of Brellum, handle every aspect of the business.) While there are multiple iterations of the Pandial, the model I received (Duobox DB.CH.301) is the “Silver” version with a perforated black strap handmade from calf leather. 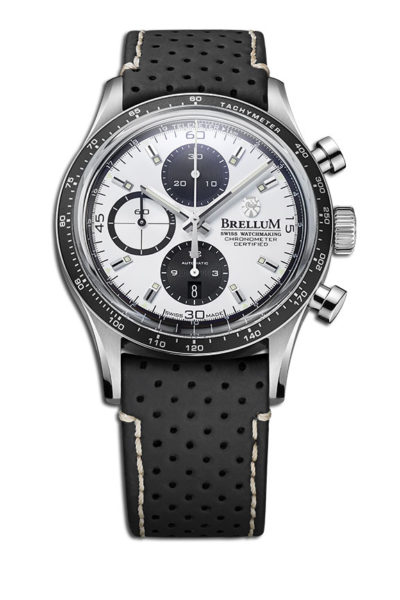 The first thing that grabbed my attention was the anti-reflective sapphire crystal, which is what gives the “Duobox” its name. On both the dial and the exhibition caseback, the watch has a “box-style” construction, meaning the crystal juts up slightly before forming a dome over the dial. You don’t see “box” crystals much these days and especially not on a caseback. This style of crystal adds some excess height to the watch itself but also brings forth a new dimension to the appearance of the dial and movement. Looking at the watch’s caliber (a trusty Valjoux 7750 that has been modified to chronometer status and rechristened Caliber BR-750-1) through this sort of crystal is almost like looking through an elongated fishbowl. It adds a dash of flair to the impressive finishing and rotor design and makes the whole experience of studying the movement through a loupe all the more engaging.

Speaking of finishing, the detail on both the case and the movement is quite compelling. The caliber is decorated with perlage and Côtes de Genève polishing throughout and features blued screws to up the quality level. The rotor, in particular, is quite eye-catching. It has been skeletonized and features the brand’s signature Wyvern motif (more on that later). The level of finishing doesn’t stop there as the watch’s deployant clasp also features perlage detailing. It’s rare to find finishing of any sort on the clasp or buckle of a watch double or triple the price of the Pandial, so seeing it here was quite a surprise. The stainless steel case is also beautifully finished.

The dial features a 6, 9, 12 chronograph layout with the 30-minute counter at 12 o’clock, the hour subdial at 6 o’clock, and the seconds subdial at 9 o’clock. The white seconds subdial features an almost-invisible snailed finish and an attractive crosshair while the two black subdials at 6 and 12 o’clock both feature a more visible snailed detailing. The date window at 6 o’clock is hidden inside the hour subdial and features a matching black aperture, which will make date purists happy. It’s unobtrusive and enhances the overall wearability of the timepiece.

While the subdials are attractive and symmetrical, one of my favorite details on the watch is the applied indices. They almost look like miniature stock cars due to the angular build and face that slopes inwards. There’s a square dot of lume on the incline and a carved black line that runs until the index precipitously drops off into a triangle of lume on the dial. I’ve spent longer than I’d care to admit looking at the angles of the indices through a loupe. The hour and minute hands of the watch feature a similar combination of indented lume. From the central axis of the watch, the hands shoot out with a black indented line similar to the rectangle of the hour markers. About halfway, they dip deeper into a pocket of lume that extends almost the rest of the way before finishing in a black trapezoidal-arrow hybrid. It’s details like the indices and hands that keep the dial design from being overtly basic. The watch has a timeless appeal but that can be rendered as “boring” if potential customers find there’s nothing “exciting” or “new” about the watch’s look.

The one detraction I have is primarily focused on the sheer amount of writing at 3 o’clock. Not only does it read off “Brellum” in a large capitalized font that dips in size between the first and last letter but underneath that are three lines of text in separate fonts. First, it says “Swiss Watchmaking” in a smaller bold font on a single line. After that, a line with a more modern font reads “Chronometer” followed by one more similar line saying “Certified.” I understand the urge to advertise the COSC certification—it’s a worthwhile achievement that deserves praise—but it’s just too much text overall. However, when compared to previous Duobox models, where there was even more writing at 3 o’clock reading “Chronometer Officially Certified” on two separate lines, it doesn’t seem as bad. Muller decided to remove “Officially” for the Pandial version so I wouldn’t be surprised to see him tinker with the amount of personal branding moving forward.

On top of all that text, there’s an applied “Wyvern” motif. The Wyvern is the official mascot/logo for Brellum and it’s completely forgivable if you’ve never heard of it. A Wyvern is a dragon-like monster with wings, a bird’s body, and a snake’s head that is part of a popular folktale in the region of Switzerland that Muller grew up in. It’s another symbol of the brand—and the personal—mythology that Muller is keen on developing. I liken it to a sort-of family crest that embodies the sort of personal battle that Muller has placed front and center in his brand’s ethos.

There are other small details worth mentioning that demonstrate how much the brand has embraced user-friendliness. The perforated leather strap on the model I reviewed had a quick-release mechanism on the spring bar intended to make switching straps a breeze. More and more brands have been embracing these quick-change mechanisms and timepiece enthusiasts are all the better for it. The deployant clasp also features a secure locking system that makes changing the sizing of the strap a breeze. There’s a small pin that locks the strap into whatever size you prefer; all you have to do is pop the pin out to adjust its opening and then pop it back in to lock it. Once locked in place, the only necessary action is to close the deployant and then you’re all set. Being able to change the strap’s size—which is sometimes a pain with a typical deployant clasp—is especially beneficial during humid days where a leather strap can grow sticky if it’s too tight on the skin. It’s details like this that demonstrate the level of thought put into the Duobox’s overall presentation.

The Brellum Pandial comes on a variety of strap options that include both brown and black leather, mesh, Nebur Tec, and the perforated black leather that I received. All the models other than the mesh are priced at a highly-accessible CHF 2,490. The mesh is priced at CHF 2,550.

After many email conversations, I had the chance to speak with Muller at Baselworld a few weeks ago. He provided me with some more background on himself as well as what the future holds for Brellum. He started attending Baselworld at the age of 13; now 43, this year was his thirtieth consecutive year attending the fair demonstrating how ingrained he is in the culture of Swiss watchmaking. In my mind, this helps further the idea of him as an ambassador for highly-limited, value-driven horology (something that most can agree there isn’t enough of these days). Right now, Brellum is producing approximately 299 watches per year and Muller says he expects to remain around that number moving forward. During our chat, he also mentioned that he’s working on his own in-house movement with delivery expected around Christmas 2018.

Show all responses
Leave a Reply to Sam Wisniewski