WatchTime New York, America’s largest luxury watch show, is a little over a week away! As we continue our countdown to the long-awaited collectors’ event, taking place at Manhattan’s Gotham Hall on October 26-27, we are highlighting timepieces from each brand that guests will have the chance to see. Today, we’re taking a look at the young Akrivia atelier that is run by Rexhep Rexhepi, who is visiting the United States for the first time ever for the show, and the highly-discussed and GPHG-nominated Chronomètre Contemporain. This article is an excerpt of a much larger profile on the 31-year old Rexhepi and his six-year-old brand that will go live this weekend and will be featured in the Nov/Dec print issue of WatchTime magazine.

The Akrivia Chronomètre Contemporain is a watch that many industry pundits have described as the most impressive timepiece of 2018 and is an early favorite for this year’s GPHG award in the Men’s category. It’s the brand’s seventh timepiece and the first that is signed with founder Rexhep Rexhepi’s signature. More importantly, it represents a new chapter for the brand as it continues to pivot towards unexplored territory in the horological mainstream.

With the Chronomètre Contemporain, Rexhepi wanted to create a contemporary wristwatch interpretation of an old-school marine chronometer. He then combined this desire with his love for the refined lugs and rounded shapes of officers’ watches from the 1940s and ’50s. For the first time in a wristwatch from Akrivia, the watch features no exposed elements on its white or black grand feu enamel dial. It also shrinks the case dimension down to 38 mm compared to the 41-mm and above width seen in previous Akrivia timepieces.

A hacking second/zero-reset function carries over from last year’s AK-06, but otherwise, this watch is purely focused on a traditional representation of time. Visible through the exhibition caseback is the manufacture Caliber RR-01 that features an eye-catching blend of anglage, perlage, black polish, côtes de Genève, hand graining, and hand engraving. There’s a play between symmetry and asymmetry through the totally parallel bridge design on the movement and the opposing jut of the Art Deco inspired lines that frame the Roman numerals on the dial.

The decision to sign the Chronomètre Contemporain with Rexhepi’s signature than with the Akrivia handle was reached to signify a new vanguard for the Akrivia label as a whole.

“The Akrivia atelier is the basis of all watches produced, whether under the Akrivia name or the Rexhep Rexhepi signed pieces,” Rexhepi says. “The movement inside the Chronomètre Contemporain is meant to be the first chapter of a new product line with a more classical aesthetic, and movements focusing on the traditional essence of watchmaking. This separation of lines is a natural process because I want to be clear in our product imagery, and at the same time, I do not want to be constrained to only the production of classically inspired timepieces – or only a modern aesthetic. I need to have the freedom for both points of view, also because I have so many years to go in defining Akrivia’s future development.”

This choice to distinguish the lines between contemporary and classic is a defining statement toward the longevity of both Rexhepi and his brand. It provides a reason to think in terms of decades rather than single years. Rexhepi understands that the work he does right now will reverberate throughout every future venture he undertakes. Every watch he makes moving forward will borrow from his experiences during his formative years as an apprentice with Patek Philippe, take from his time with as a watchmaker for F.P. Journe’s workshop, and be influenced by the mistakes and victories of the first six years of Akrivia. It’s this empirical approach that has helped cement Akrivia and Rexhep Rexhepi as an heir apparent to horology’s future.

Interested in trying on the Akrivia Chronomètre Contemporain and being one of the first American collectors to meet Rexhep Rexhepi in person? You’ll have the chance next weekend to go hands-on with it and hundreds of other timepieces from the other 30 brands at WatchTime New York 2018. Tickets are going fast; order yours now!

END_OF_DOCUMENT_TOKEN_TO_BE_REPLACED 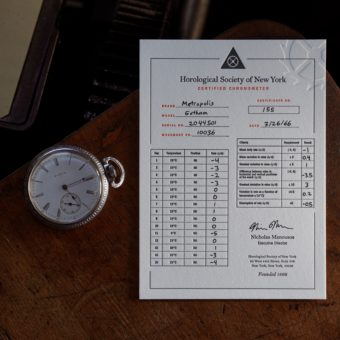