Germany’s A. Lange & Söhne has announced the fourth timepiece in its limited edition run of new releases to celebrate the 25th anniversary of 1994’s original Lange 1 (a new Lange 1 will be released each month until October). Following the classic-design Lange 1 Anniversary watch shown at SIHH in January, the Grand Lange 1 Moon Phase released in February, and last month’s Little Lange, the latest limited Lange 1 is the most complex we’ve seen so far. 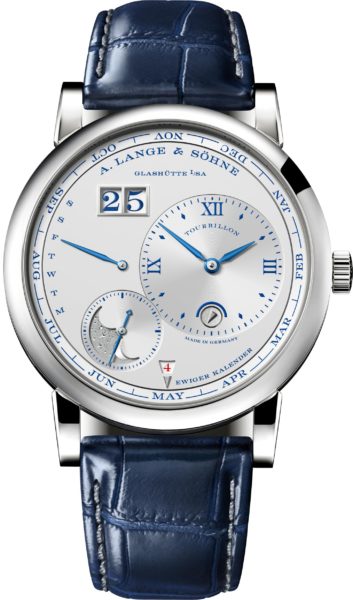 The Lange 1 Tourbillon Perpetual Calendar “25th Anniversary” watch follows the same design and material codes that its previously released brethren have established. The case is made of white gold, the asymmetrical dial argenté toned with blue accents and blued-steel hands, and production is limited to 25 total pieces. What differentiates the watch from its older siblings is the addition of a tourbillon hidden behind the dial and a perpetual calendar indication. 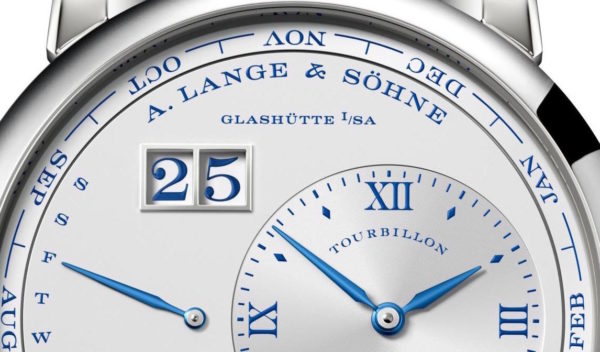 This isn’t the first time that the Glashütte-based brand has released this combination within the greater Lange 1 family as it was first made available to the public in 2012. In fact, the new anniversary edition borrows the month indicator from that watch. In order to fit the various calendar indications on the dial, Lange developed a rotating ring around the periphery of the dial. The underside of this design features a circumferential contour with wave-shaped recesses. A spring-loaded sampler lever glides along this contour and is deflected by a magnitude that corresponds to the depth of the respective recess. The more it is deflected, the shorter the month.

Perhaps the most valued aspect of this watch for collectors is the level of complexity combined with the overall discretion that the timepiece provides. Were it not for a modest epigraph at 12 o’clock, there would be no indication of the watch’s tourbillon application. However, a quick flip of the watch reveals automatic caliber L082.1 with a 69-part, one-minute tourbillon that includes the brand’s patented stop-seconds mechanism. This makes it possible to instantly stop the tourbillon cage with the balance at any time by pulling the crown so the watch can be set with one-second accuracy. 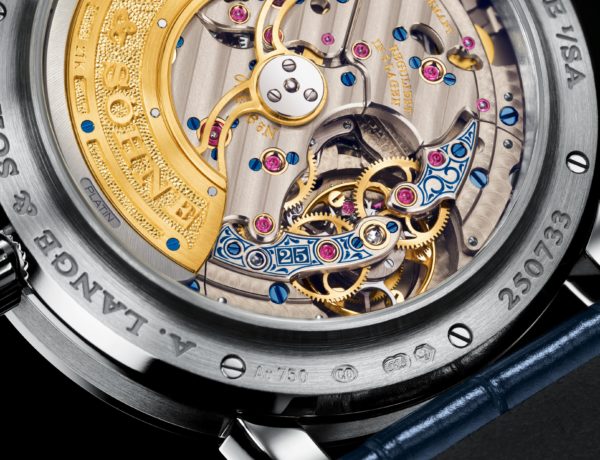 Just as with the previous limited edition timepieces in this run, a small reference to the watch’s anniversary is engraved into the movement. In this case, the tourbillon cock is graced with a blue engraving shaped like the Lange big date with the number 25. The 25 not only refers to the birthday but also to a special detail of the launch. It took place on 24 October 1994. On this day, the date displays of the debut watches were set to the 25th so they would be current when showcased in the following day’s newspapers. The A. Lange & Söhne Lange 1 Tourbillon Perpetual Calendar “25th Anniversary” is limited to 25 pieces and is priced at $335,800.