While we haven’t officially covered Brew Watch Co. on the WatchTime website, dedicated readers should be familiar with the brand from our WatchList feature in the August/September print issue of WatchTime magazine (Micro in America), or from founder Jonathan Ferrer’s participation in our “An American Movement” panel at WatchTime New York 2018. Regardless whether or not you’re familiar with the New York City-based brand, there’s little question that it has positioned itself as one of the more exciting brands to watch among the still-niche terrain of enthusiast-driven, small-scale, independent brands based in America.

One way that Brew has been able to differentiate itself is by taking its design cues not from typical inspirational fodder like automobiles or aviation, but instead from the humble — or in this case, not so humble — espresso machine. Across Europe, and even in some parts of America’s big-city hipsterdom, the art of coffee is no laughing matter. In fact, the Mr. Coffee or Keurig that’s sitting in your office or kitchen right now would be as much of a pariah in an Italian Caffè as wearing an Invicta to a watch meetup would be. There’s a long-lasting culture of mechanical craftsmanship that goes into producing the elegant — and expensive — espresso machines that these old-world caffeine fanatics adore. In fact, the mixture of finishes and blending of materials found in these java dispensers is something that crosses over directly into mechanical watchmaking. It’s this arena that Ferrer has focused on with Brew over the past four years and it has allowed the brand to build a successful identity.

Following multiple successful iterations of the brand’s curvilinear automatic HP-1 model, the new Retrograph Chronograph follows this same curated concept in a seamless fashion. Ferrer — who moonlights as an Adjunct Professor of Industrial Design at the New Jersey Institute of Technology — is able to balance his caffeinated inclinations in a discrete manner, allowing for subtle hints towards the brand’s calling card without overwhelming his model’s design.

In this case, the Retrograph features a slight deviation in the lower portion of the dial. Go ahead and take a look at the minute scale on the periphery of the dial in the above image. Do you see something odd? Look closer. There’s a distinct change in the number of markers between the 12 and 7 o’clock (or 0 and 35 seconds/minutes) indexes compared to the remaining five hours of the dial. Hidden in plain sight is what Ferrer calls an espresso “shot timer,” or, in other words, it’s a countdown timer until your espresso maker reaches the ideal extraction point for a perfectly frothy and delicious cup.

This seemingly innocuous complication actually claims lineage from a long line of “telephone timers” found in chronographs from the 1930s. These chronographs would have markers on their subdials that let you know when your time on a pay phone was running low and when you needed to insert another coin. It’s a playful callback to a part of horological history rarely seen today, but with the requisite Brew twist.

Other than the so-called “shot timer,” the Retrograph is a seemingly traditional chronograph powered by one of Seiko’s hybrid Mecha-Quartz movements that blends a quartz movement with an automatic chronograph mechanism for a smooth seconds hand and instant chronograph reset. At 3 o’clock, there’s a 24-hour indicator; at 9 o’clock a 60-minute indicator. There’s an unobtrusive date window placed at 6 o’clock. Squares of applied lume allow for enhanced legibility at the hour markers, and the 38-mm cushion case uses a two-part construction of stainless steel. Additionally, the flat sapphire crystal has been coated with an anti-reflective coating and the leather strap includes quick-change functionality. 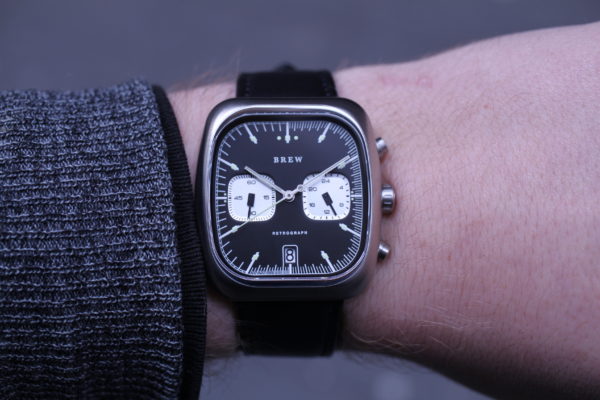 The Brew Retrograph comes in three different colorways: blue, black, and white. All three models are available now and are priced at $350.

No Responses to “A Caffeinated Chronograph: Hands-On with the Brew Watch Co. Retrograph”