Fresh off trolling the entire Swiss watch industry, H. Moser & Cie. also had one of the more technically interesting introductions of the entire SIHH fair back in January. H. Moser has made its name on watches that are either supremely traditional, featuring sunburst fumé dials and time-only displays, or watches that are based out of humor and provocation like the aforementioned Swiss Icons watch, the Swiss Mad watch (made from Swiss Cheese), or the Swiss Alp watch (teasing the quadrilateral form of the Apple Watch). This time, however, H. Moser went in a completely different direction and unveiled a new take on a wandering hour display that is unlike anything we’ve seen before.

Looking over the 42 mm white gold timepiece, you’ll see three separate disks set underneath a sapphire minute disc that rotates on a 240° arc all laid out on top of what H. Moser calls its “Funky Blue” dial. On a typical wandering hour display — such as on the Arnold & Son Golden Wheel —  the time is read through a jumping digital hours indication. The difference between the Golden Wheel and the new Endeavour Flying Hours is that where the Arnold & Son model has the hour disks on a single carriage, the H. Moser timepiece has three separate hour dials that each rotate on their own axis. The three dials are separated into 3, 6, 9, and 12 o’clock; 2, 5, 8, and 11 o’clock; and 1, 4, 7, and 10 o’clock. Directly underneath each hour marker, there’s an arrow that gives you the exact minute according to the floating wheel. When the current hour ends, the minute arc continues on and the hour dials adjust so that the next hour marker is in the correct position and marked in white, while past and future hours appear in black. It’s a little confusing at first, but overall this is a more effective and transparent way of telling time compared to a typical wandering hour display.

The movement inside was developed and produced in cooperation with sister-brand Hautlence and is based on H. Moser’s HMC 200 caliber. It boasts a three-day power reserve and is equipped with a bi-directional winding system powered by an oscillating weight in solid rose gold. The escapement and balance spring are produced in-house by Precision Engineering AG, another company within the underappreciated MELD Holding group that owns both Hautlence and H. Moser & Cie.

The H.Moser & Cie Endeavour Flying Hours comes on a beige kudu leather strap with a raw finish. It is limited to 60 total pieces and will be priced at $32,000 when it’s released in June. 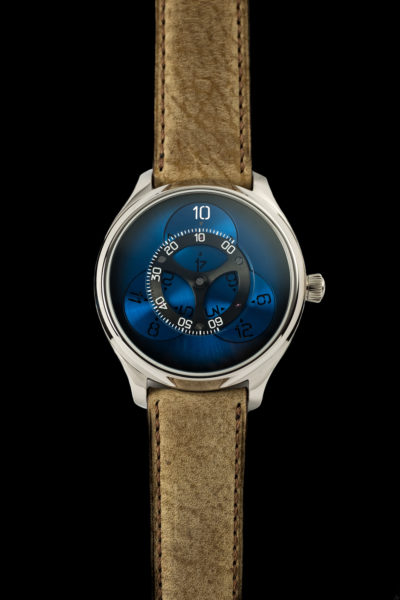 No Responses to “A New Spin on a Wandering Hour Display from H. Moser & Cie.”

END_OF_DOCUMENT_TOKEN_TO_BE_REPLACED 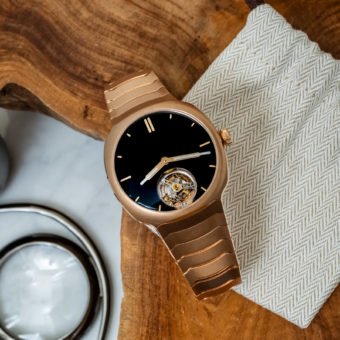