If you are like me and my colleagues at Fratellowatches, you can’t live with only one watch. You need at least one chronograph, one watch with a second time zone, and one divers’ watch (even if you never go near a swimming pool). Perhaps you need at least one quartz watch as well, if only to set the time correctly on your mechanical watches. What about a watch with a moon-phase? Can’t do without one, right?

However, for most people – including me – the reality is that one has to make choices. I feel fortunate to have accumulated a modest collection of watches over approximately 15 years. It is, I’d say, a well-balanced collection, even though I have several pieces representing the one specific brand and model that I seriously “collect.” But what if you could only own one watch? Perhaps we are all spoiled. My father and grandfather always had just one good watch, one that they bought for life. Many brands appealed to that mentality in their advertising decades ago, but nowadays, much of their marketing is focused more on the “lifestyle” concept of having a watch for each of your various outfits and moods — which, of course, persuades us to buy more than one watch from them. But, for the purposes of this list, let’s go back to that old-school notion of one good watch that you can wear the rest of your life. The list below represents what I’d call my top five “Only One” watches. Yes, it’s not really fair, since I’m naming five rather than one, but again, you need to make choices. I would pick any one of these watches to be my only watch if need be. Perhaps that day will come, but I hope not.

Also, to make it a bit easier, I chose watches from more or less the following price ranges:

I’ve reviewed this watch in detail some time ago (here) on my blog, Fratellowatches.com, and it remains my favorite “Only One” watch for quite some time now. Although I am a collector of the Speedmaster Professional models that are considered to be classical “Moonwatches,” this new interpretation, with an in-house-developed, co-axial chronograph movement, is a great all-around watch for everyday use. At first, I had to get used to the two subdials instead of the earlier model’s three, but after a few days I found myself feeling quite comfortable reading the elapsed chronograph hours and minutes from one subdial. Omega Caliber 9300, with its co-axial escapement and use of silicon parts, is quite impressive for an industrial-produced movement. The domed sapphire crystals on the front and back make this an easy watch to wear; it doesn’t feel as bulky as its specifications make it appear. The classic design of the case is clearly based on that of the original Moonwatch, and the dial is very clean and readable. In the under-$10,000 price category, this is definitely my number one pick.

One of the advantages of owning a Rolex used to be that you could trade it for a plane ticket home from anywhere in the world. Although that still might be the case, the world of luxury watches has grown so much over the past two decades that, even in the most exotic places, any number of other luxury watches will get you that ticket. So I didn’t take that reason into account. The black-and-blue Rolex GMT-Master II, introduced just this year, is – to me – the perfect all-arounder, and especially useful when traveling through (and to) different time zones. The stainless-steel case has a perfect size and the Oyster bracelet, with its Easylink system for adjustment, is almost unsurpassed. To be honest, even though the Rolex GMT-Master II (like all Rolex watches) has become quite expensive over the last few years — I have not received comparable annual increases from my employers — it is still well worth it. I did a write-up about this particular black-and-blue Rolex GMT-Master II here.

This is a watch that immediately caught my attention when I laid my eyes on one in the late 1990s. I love the octagonal shape, the industrial look of the eight bolts, and the ultra-thin movement. It’s a simple-looking watch — it doesn’t even have a seconds hand — but is very complicated in terms of design. Of all the great watches that Gérald Genta designed, this raw, stainless-steel luxury sports watch is my favorite. The thin bracelet on the Royal Oak Reference 15202 (nicknamed “Jumbo”) looks and feels flimsy, yet very well-crafted and finished. The satin finish on the matte parts of the case and bracelet are scratch magnets, but if you buy the watch new and keep it for life, at least these are your scratches. More information about the Audemars Piguet Royal Oak Extra-Thin can be found here.

Here’s another watch with a porthole-inspired case, designed by Genta just a few years after the launch of the Audemars Piguet Royal Oak that I ranked just above it. The sharp edges aren’t here and the dial pattern is even more electric than the Clous-de-Paris on the Royal Oak’s dial. Although the very first Nautilus watches used the same ultra-thin movements as the Royal Oak Jumbo did (based on Jaeger-LeCoultre’s Caliber 920), Patek quickly replaced these with its own in-house developed Patek Philippe movements. The re-launch of the Nautilus 3700/1 (which became the 5711/1A) took place in 2006, 30 years after its first introduction; the new models now come with a second hand. Although the retail price of the Nautilus is slightly higher than that of the Royal Oak Extra-Thin Jumbo, the resale value of the Nautilus is a bit stronger and might be worth the extra dollars. The Audemars Piguet and Patek Philippe watches on this list are of the same breed, and picking one of them is simply a matter of taste. Here is a comparison between the very first Nautilus 3700/1A and the newer model (5711/1A).

It’s not just because I am Dutch that I include this Dutch watch brand here, but also because I really love the secondes mortes or “dead beat” seconds function on this watch from Grönefeld. This complication has no specific purpose other than to show the movement of the seconds hand per second (one hertz) instead of in the tiny increments that we are used to. It’s sort of a gimmick complication, but one that takes the skills of a master watchmaker to develop and produce. This 43-mm watch comes in platinum, gold and polished titanium. The One Hertz ‘Ice’ version is the model I’d pick, made of titanium with a polished finish. The in-house developed and produced G-02 caliber also has a nice feature in which you use the crown to put the watch into either winding or setting mode. When the S/W-indicator on the dial indicates “S,” you can turn the crown to correct the time. Push the crown, and the indicator changes to “W,” and you are able to wind the watch. More about Grönefeld’s One Hertz watches can be found here.

Which watch would you pick if you could have only one? Feel free to share your personal choices using the comment field below.

This article was originally published in 2013 and has been updated.

No Responses to “What If You Could Only Have One Watch? My Top 5 Choices”

END_OF_DOCUMENT_TOKEN_TO_BE_REPLACED 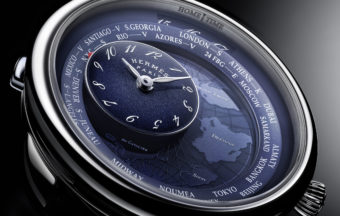