In 2009, just two years after the launch of its first models, British high-flyer watch brand Bremont launched the 43-mm-diameter Supermarine S500. Despite the fact that it was Bremont’s first watch designed for the depths of the sea, the brand managed to make it look both contemporary and traditional at the same time, a quality one doesn’t come across very often. Add the typical Bremont case construction with the black DLC centerpiece, an unusual crown position at 2 o’clock, several bold color options and an unexpected choice of hands, and it should become clear why we at DiveIntoWatches.com have long wanted to get our hands on one for an in-depth review — especially after the larger, 45-mm version was announced in 2012.

Bremont doesn’t  — at least not yet — have a retail network here in Switzerland (or in Germany or Austria, for that matter), as it does in the U.S., which made it a bit more difficult than usual to get our hands on one. However, thanks to Bremont’s HQ in London, we finally got a sample watch sent to us to try on and put in front of a camera. In the spirit of transparency, we should mention that it is always a bit difficult to know what kind of watch you might get from a manufacturer when you make these requests. Sometimes it is a pre-production model (possibly with limited functionality) or a model that didn’t pass the final quality control. Or, if you’re fortunate, it might even be the same watch you’d get if you ordered it as a consumer (including box and papers).

As you will surely notice in the pictures, the watch we got had some minor scratches, which is an indicator that we were not the first ones to spend time with this particular S2000. More importantly, you will probably also notice that the day and date wheels are not aligned all that precisely, which had us wishing for a no-date version. With this in mind, let us assume that we didn’t get a watch that was initially intended for retail sale — also with acknowledgment of the unmistakably high level of quality we have gotten used to get from Bremont over the last several years.

This, however, made it more difficult to find anything to criticize, which is a good thing from a consumer’s point-of-view but not so helpful when you actually try to write a well-balanced review. One thing struck us right away: given the S2000’s increased performance, and its positioning as a professional-grade dive watch, we feel that the triangle on the bezel should not have been executed in red (see this article for our reasoning on this). On the other hand, from a design point-of-view, we applaud Bremont for the red accents on the hand, dial and bezel.

On a more serious note re: diving functionality (and assuming that there isn’t an additional strap extension included), the standard black rubber strap is too short should you ever plan on wearing the S2000 over a diving suit. But these are about the only reasons we could come up with if we were looking to convince ourselves not to buy this watch.

Compared to its “only” 500-meter water-resistant predecessor, the 2,000 meter-water-resistant S2000 brings not only a different color scheme, but also more thickness and a 2-mm larger diameter (but still wears smaller than what you’d expect from a 45-mm watch). This also means that not only was the case enlarged, but most of the parts had to be replaced in order to keep the well-balanced proportions of the initial design.

With the introduction of this S2000 in 2012, Bremont started to include “London” on the dial instead of the former “Swiss Made” that can be found in earlier S500 models.

The watch’s COSC-certified movement sits in a patented mount to increase shock protection. It is then placed inside an anti-magnetic soft-iron cage to better protect the balance, balance spring and escapement from the effects of magnetic fields. The solid caseback has been decorated with an engraved profile of the Supermarine S6.B, the fastest airplane in the world in 1931 and also considered to have played a vital role in the development of the legendary Spitfire.

The 120-click bezel features a sapphire inlay and is filled with blue Super-LumiNova, which also appears on the hands and indices.

One of the most prominent design features of the Supermarine S2000 is the additional crown protector (which actually looks a bit like it was made of titanium, given the slightly different color) and the screw-down crown at 2 o’clock.

What we would have changed:

What we liked very much:

What we absolutely loved:

Scroll down for more photos…

END_OF_DOCUMENT_TOKEN_TO_BE_REPLACED 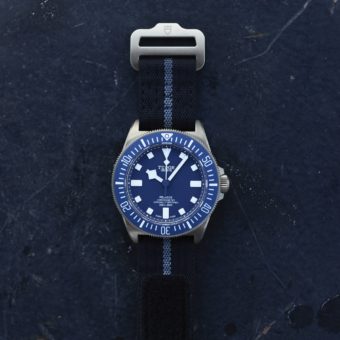