Mühle Glashütte is an interesting brand not only for its attractive, sporty, and well-priced timepieces but also due to its compelling history. The independent German company has only been producing wristwatches since 1994, but its history as a watchmaker stretches all the way back to 1869. This year, the brand is celebrating its 150th anniversary of timepiece production as well as 25 years as a producer of wristwatches. To commemorate these dual anniversaries, the German brand has announced four new timepieces during Baselworld 2019, each with a specialty, blue anodized rotor with an anniversary engraving.

While all four timepieces have different attributes worth discussing, the first model we’d like to highlight from the 2019 collection is the new Teutonia Sport I chronograph that combines a bicompax register layout with a clous de Paris dial pattern to create a striking look. Mühle released the first Teutonia Sport I chronograph in 2017 with an eye-catching black and red colorway, and this new release offers a more textured and interesting option that recalls German Silver Arrow race cars. Speaking of Mühle’s history, starting in the 1920s, R. Mühle & Sohn (the precursor to the contemporary Mühle brand) supplied three out of the four brands in the Saxon Auto Union racing group with Glashütte Mühle speedometers as well as car clocks and rev counters.

The new Mühle Teutonia Sport I chronograph has a bi-compax register with small seconds at 9 o’clock and a 30-minute counter at 3 o’clock. There’s a tachymeter scale that is located on the flange of the watch and a bidirectional bezel. The stainless steel case features a mixture of brushing and polishing and is sized at 42.6 mm by 15.5 mm. The silver dial is enhanced with clous de Paris embossing and the subdials are snailed. A small, color-matching date aperture is tucked in at 6 o’clock. The sapphire crystal is slightly domed and features an anti-reflective coating. The hands and indexes have gone through a chemical-vapor deposition treatment that leaves it with the dark blue color. The tachymeter scale and second division have also gone through this process. In regard to the second scale, three fine indexes are used to divide a second up into four even smaller units, thus enabling precise measurements of as little as an eighth of a second. If the central seconds hand stops directly on one of these fine blue lines, it gives a clear reading of two, four or sixth eighths of a second. If it comes to a halt between the indices, you can read the time recorded to the nearest one, three, five or seven eighths of a second.

Inside the watch and visible through the sapphire crystal exhibition caseback is the MU 9419 caliber that features Mühle’s patented woodpecker neck regulation system that offers heightened shock resistance and features up to 48 hours of running autonomy. The movement is specced to gain between 0 and +8 seconds per day. Typical Glashütte finishing is present including the three-quarter plate movement architecture. The oscillating weight, as mentioned, features Mühle’s blue anodized anniversary rotor. 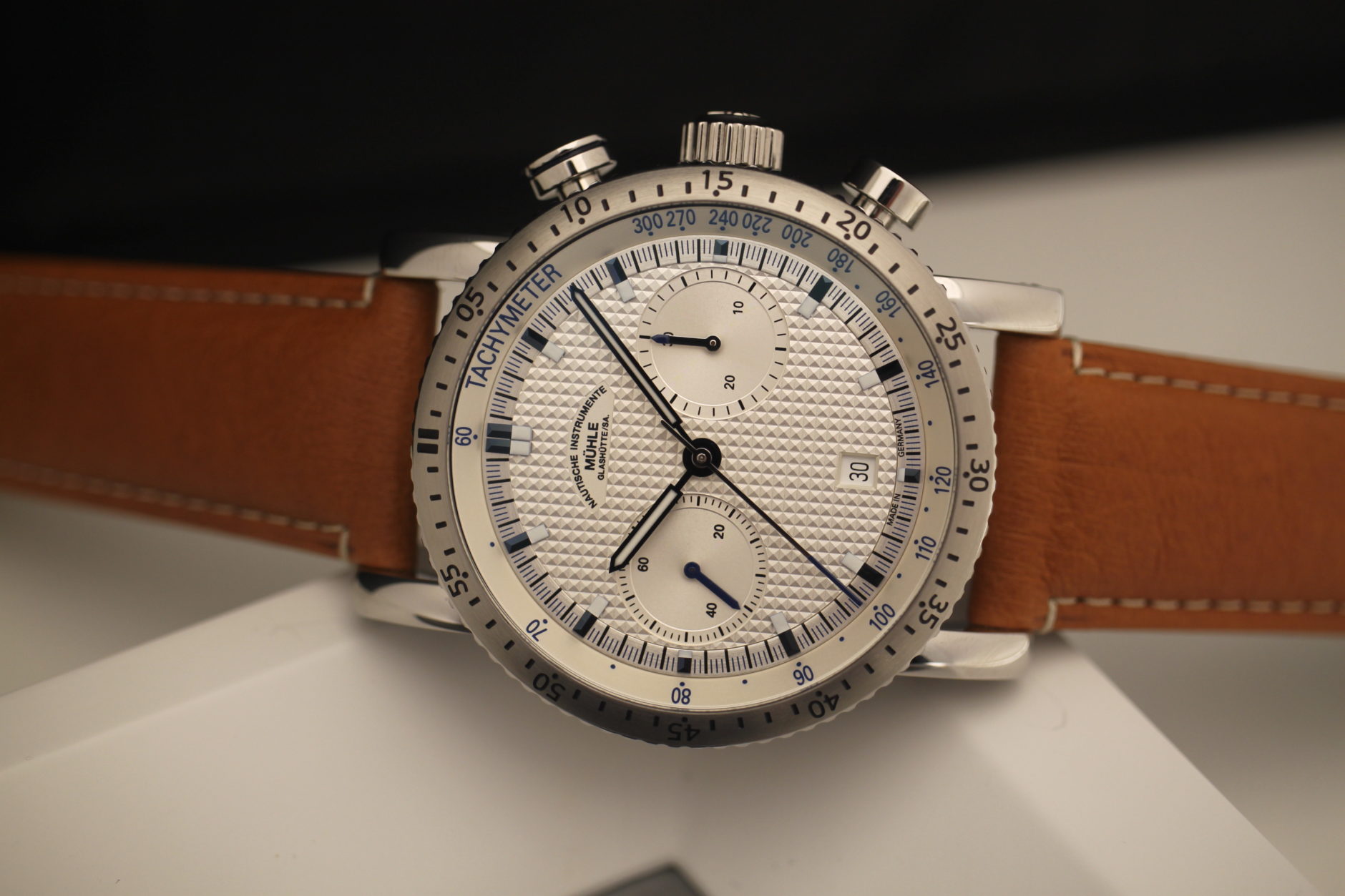 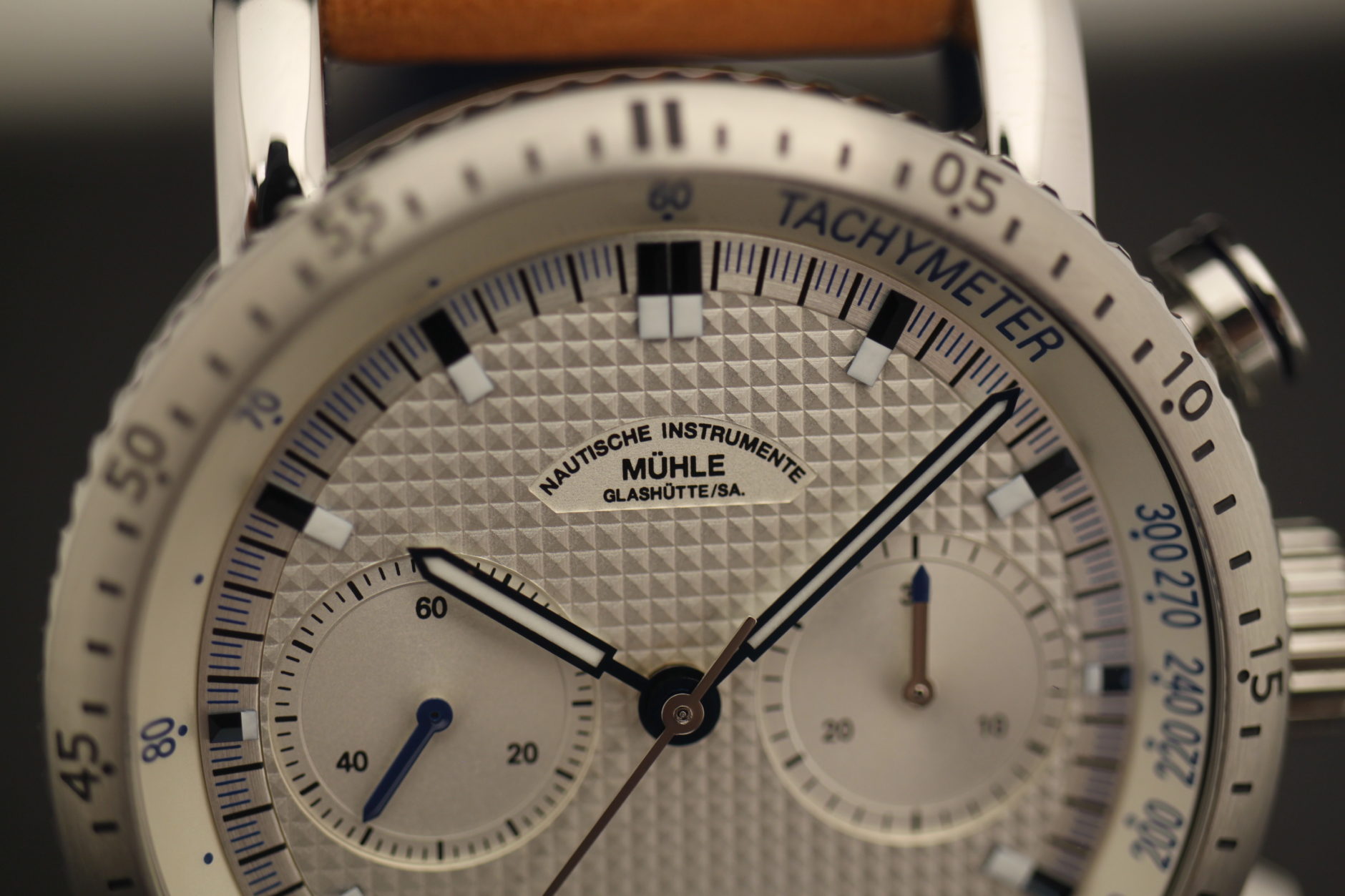 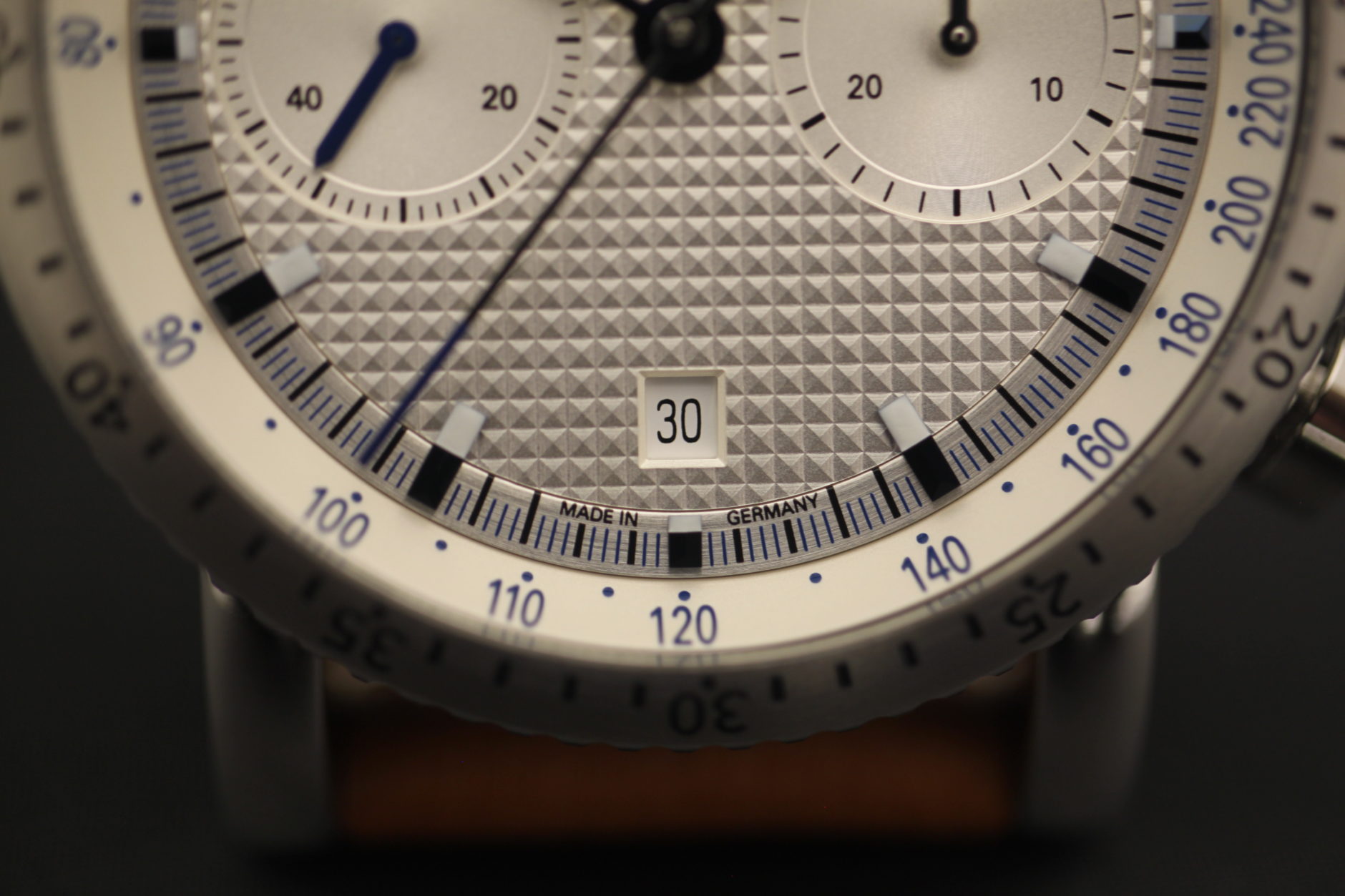 A color-matching date window is located at 6 o’clock.
3/3

The Mühle Glashütte Teutonia Sport I is priced at $3,899 and will be available at the end of June.