At the Baselworld 2014 fair this week, Casio brought out two new additions to the Pro Trek family of watches, which are designed for rugged use in the outdoors. The PRG270B and the PRW6000Y both feature updated versions of Casio’s Triple Sensor system, along with a number of other features. Let’s take a look at each of them in turn.

The Pro Trek PRG270B is a heavy-duty digital watch. It is designed for durability, with a Cordura nylon strap and low-temperature resistance to -10 degrees Celsius (+14 Fahrenheit). It uses Casio’s Tough Solar Power technology, so that it can charge in low levels of sunlight or in fluorescent light. It also has a power-save function: after it has not been exposed to light for a length of time, it powers down to conserve energy. In keeping with its sensitivity to sunlight, the PRG270B has an automatic backlight that adjusts to ambient light conditions so that it gives the appropriate amount of illumination when the wearer activates it.

But the most notable feature of the PRG270B is Casio’s updated Triple Sensor technology, now called Triple Sensor Version 3. The PRG270B has a direction sensor for compass readings and a pressure sensor for its altimeter and barometer. With Triple Sensor Version 3, these sensors are significantly smaller than in previous watches: they take up only five percent of the space they used to and consume 1/10 of the energy. Casio says that the frequency of the watch’s altitude reading is now once per second, down from once every five seconds. The resolution of altitude readings is also improved to an accuracy of one-meter increments, rather than five meters. The compass is now capable of 60 seconds of continuous measurement.

The PRG270B has four alarms, world time, and sunrise and sunset data. It is water resistant to 100 meters. It will be available in the U.S. immediately, and it costs $200.

Casio also introduced the PRW6000Y, and analog quartz watch. It, too, makes use of the intelligent backlight feature and Tough Solar Power for energy conservation. In addition, the PRW6000Y employs Casio’s Multi-Band 6 technology, receiving radio signals from six atomic clocks around the world to maintain timekeeping accuracy. The watch synchronizes automatically with timekeeping stations in the U.S., the U.K., Germany, China and Japan.

Like the PRG270B, the PRW6000Y includes the new Triple Sensor Version 3 technology for its compass, barometer, and altimeter. The barometric sensor here can activate an atmospheric pressure trend alarm, alerting you to sudden changes in the atmosphere. If the weather is changing quickly and you’re about to be caught in a downpour, the watch will make sure you’re the first to know.

END_OF_DOCUMENT_TOKEN_TO_BE_REPLACED 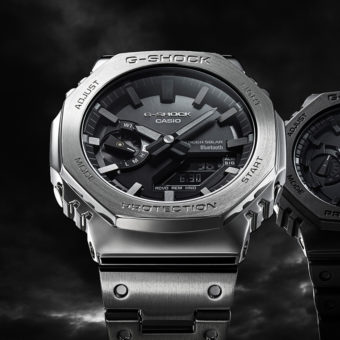