The MeisterSinger Lunascope, first announced in the run-up to Baselworld back in March, is that timepiece. Distinguished by a maximalist moon-phase aperture that encompasses what amounts to the entirety of the upper half of the watch, it’s a timepiece that doesn’t apologize for its boldness; rather, it draws the wearer in with its photorealistic moon and the velvety sheen of its rich blue dial.

Borrowing the 40-mm stainless steel case design from the brand’s fan-favorite Pangaea line, the Lunascope’s main attraction is, of course, the previously mentioned moon-phase display that boasts some jaw-dropping astronomical precision. The average moon cycle takes 29 days, 12 hours, 44 minutes, and 2.9 seconds to completely circle the Earth. The standard watch with a moon-phase complication rounds this figure down to 29.5 days via the movement, which means it deviates by eight hours per year and, thus, needs to be corrected by one complete day every three years. What’s different about the movement inside the MeisterSinger Lunascope (a modified ETA 2836-2 with moon module that has a 38-hour power reserve), however, is that it has been refined so it only requires a slight adjustment after 128 years.

The Lunascope is available in two different dial colors: opaline silver and a sunburst dark blue that seamlessly translates to the blue of the night sky in the moon-phase aperture. The watch I wore on-and-off for a little over a month was the latter and it offered the expected joys you find while wearing a MeisterSinger: a leisurely approach to traditional timekeeping, Bauhaus-tinged styling, and a general uniformity (for example, the numerals, even the single digits, have two numbers for symmetry’s sake, so “01, 02, 03,” etc.) that enhances the watch’s overall design.

What I found most impressive about the watch is specifically how the lack of kinetic action on the dial enhances the stately pace of the moon-phase indicator. With an aperture this maximalized, it’s possible to appreciate the moon-phase as a lead complication rather than as a complementary one such as on a perpetual calendar. For me, that’s where the Lunascope really excels. Like a pop-up storybook come to life, the undisturbed crawl of the moon is a reminder, not only of the moon’s placement in the sky, but of the joy of discovering a horological novelty in the truest sense of the word.

Both models feature a blue date window at 6 o’clock. The blue model comes with a cognac-colored calfskin strap; the silver-opaline version with a dark brown leather strap. The MeisterSinger Lunascope is available now and is priced at €2,990.

END_OF_DOCUMENT_TOKEN_TO_BE_REPLACED 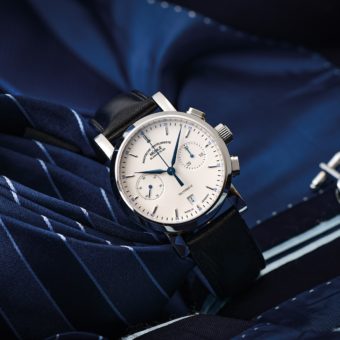