Back in 2016, Oris released the Carl Brashear Limited Edition as a bronze addition to the brand’s beloved Diver Sixty-Five line. Ever since, the watch has become a go-to recommendation for dive watch enthusiasts looking to add a bronze timepiece to their collection — that is, if you were somehow able to find one. Earlier today, in anticipation of Baselworld, the independent brand out of Holstein, Switzerland unveiled the Carl Brashear 2.0. The big difference? This time around it’s a chronograph.

Before we delve into the nitty-gritty details of the watch’s background and technical development, let’s recap just who Carl Brashear was and why the name might sound familiar to you even if you’ve never stepped a foot into the ocean. Carl Brashear was the first African-American to become a certified U.S. Navy Diver back in 1954. In 1970, he became the first African-American to reach the rank of U.S. Navy Master Diver despite losing one of his legs in the aftermath of the 1966 Palomares Incident (Brashear was later awarded the Navy and Marine Corps Medal for his heroic actions). His motto — “It’s not a sin to get knocked down; it’s a sin to stay down” — can be found on the caseback of both the original time-only Carl Brashear and the new chronograph version. His biggest moment in the spotlight, however, just might be when Cuba Gooding Jr. took on the role of Brashear in the 2000 film, Men of Honor.

Oris originally chose to use bronze in the case, crown, pushers, and bezel as a way to call back to the vintage dive helmets that Brashear and countless other divers would have used at the time. It’s a memorable choice that offers up an opportunity for the development of a natural patina. If you’ve never owned a bronze watch, patina occurs over time as the bronze oxidizes after being in contact with air, water, and the oils in your skin. The bronze gradually develops a greenish-brown layer that many watch enthusiasts absolutely adore. Love it or hate it, bronze timepieces offer something uniquely personal that can’t be replicated by other metals.  It’s also worth noting that this is only the second time Oris has ever used bronze in one of its timepieces throughout its 114 year history, the first being in the 2016 time-only version.

Inside the watch, we have the Oris Caliber 771, which is a modified Sellita SW 510 movement with a two-counter chronograph and a 48-hour power reserve. This is the first time that Oris has used this specific caliber. The bi-compax layout of the subdials leaves a 30-minute counter at 3 o’clock and a small second at 9 o’clock. Date purists should be happy as the brand omitted the complication this time around in order to keep the dial as clean and symmetrical as possible. The dial is a deep blue that is extremely rich in person and is, of course, meant to recall the depths of the ocean that Brashear entered time-and-time again with zero hesitation. The watch has grown ever-so-slightly from 42 mm to 43 mm and measures in at a hair thicker thanks to the more complicated movement.

The 43 mm watch gamely fulfills other dive watch necessities such as a 100 m water resistance, a uni-directional bezel, a screw-down crown, and Super-LumiNova filled indices and hands. The Oris Carl Brashear Chronograph Limited Edition is limited to 2,000 pieces and will be available for $4,950 when it’s officially released in April.

No Responses to “The Oris Carl Brashear Chronograph Limited Edition”

Show all responses
Leave a Reply to Gus Kund

END_OF_DOCUMENT_TOKEN_TO_BE_REPLACED 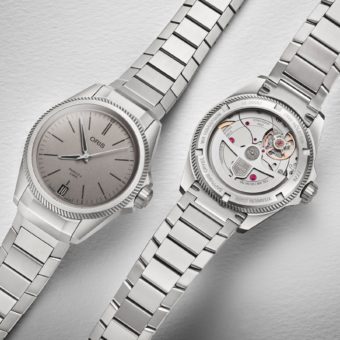