Japan’s Citizen Watch Co. began its high-profile partnership with Disney Entertainment and Marvel Studios in 2018 and has launched several rounds of Marvel superhero-themed watches in the months since, the most recent additions debuting at this year’s New York Comic Con. Now, just in time for the holidays and in the closing months of Marvel’s 80th Anniversary year, the company unveils its first timepiece dedicated to Marvel’s legendary founder, Stan Lee, who passed away in November 2018.

Citizen’s Stan Lee Limited Edition pays tribute to the fertile imagination and prolific creativity of Lee (born Stanley Martin Lieber), the writer, editor, publisher and producer who co-created, along with some of the comics industry’s most heralded artists, such iconic characters as Spider-Man, the Hulk, the Avengers, the X-Men, Daredevil, Doctor Strange, and the Fantastic Four, and started a small family-owned publishing company on its path to becoming a multimedia entertainment giant. Citizen partnered with POW! Entertainment, the company Lee co-founded in 2001 after he’d stepped away from everyday duties at Marvel, to conceive the specially branded watch, which a black dial with printed gradient patterns accentuated by Lee’s famous signature and his iconic silhouette.

The watch’s caseback is etched with the well-known Lee catch phrase, “Excelsior!” in his signature handwriting and includes the limited edition number (out of 1,922 pieces made, in tribute to the year of the Marvel legend’s birth). Like all Citizen’s Marvel watches, it contains the brand’s Eco-Drive movement, which can be recharged constantly by any light source and thus eliminates the need for regular battery changes that most quartz watches require. Packaged in a special watch box inside a colorfully illustrated cylinder with comic-book-style images of Lee, the watch will retail for $595 and can be purchased exclusively online at www.citizenwatch.com.

Show all responses
Leave a Reply to Danny Simenauer

END_OF_DOCUMENT_TOKEN_TO_BE_REPLACED 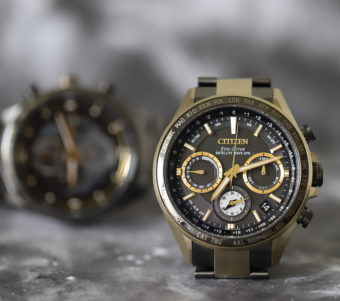