More than eleven years ago, after Bill Gates personally introduced Microsoft smartwatches at the Consumer Electronics Show in Las Vegas, I wrote a column in WatchTime entitled “Honk If You Want a Computer On Your Wrist!” The column asked the following simple question: “Does anyone really want this contraption?”

My answer in the column, admittedly inelegantly stated, was “Whaddya, stupid? Of course not!”

Forgive the immodesty, but I was right. Microsoft smartwatches, produced in conjunction with Citizen, Fossil, Suunto and Swatch, were all total flops. Since then, despite the arrival of various and sundry smartwatches (Pebble, i’m Watch, Martian, Galaxy Gear and more), very few people have shown any sign that they want a computer on the wrist.

We are now arrived at what is surely the moment of truth for smartwatches. On Sept. 9 of last year, mighty Apple unveiled the Apple Watch, described by the New York Times as “a miniature computer strapped around the wrist.” Finally, once and for all, we are about to get the answer to what I believe is still the fundamental question about smartwatches: Does anyone really want these contraptions? If Apple can’t convince Americans to buy smartwatches, no one can, and the smartwatch adventure will be over.

We’ll have to wait a bit for the answer, since the watches don’t go on sale until April 2015. In the meantime, let’s assess the pros and cons of the Apple Watch in terms of some crucial smartwatch criteria.

Previous smartwatches have been panned because of their poor design. “Geek chic,” their manufactures have learned, has a limited appeal. Apple has designed its watch with a traditional rectangular watch design, and the early reviews are positive. “The device is stunning to look at,” wrote Farhad Manjoo in the The New York Times, “with a variety of faces and watchbands that bear more in common with luxury jewelry than with gadgets.”

Tim Bradshaw noted in the Financial Times, “The impression was that here was finally a smartwatch that feels more like jewelry than technology.” Whether regular consumers (particularly women) share the fashion sense of technology reporters remains to be seen. But style-wise, Apple Watch has outdone its rivals.

High power consumption and short battery life have been major problems for previous smartwatches. The fact that Apple CEO Tim Cook had nothing to say about battery life speaks volumes. Apple executives reportedly told the tech press that the watch will have to be charged every day. Ugh.

Apple Watches come in steel, aluminum and gold cases. Prices start at $349 and go up. In addition, the watches only work with a recent Apple phone. The new iPhone 6, for example, costs $200 and the 6 Plus costs $300. That kind of outlay could dissuade some consumers, who might otherwise be interested, from trying the watch.

The Apple Watch is loaded with features and apps that justify the high price. Apple Pay, health and fitness apps, calendar, map navigation, music player, notifications, photos, Siri and voice search, and more make it the most functional wrist instrument ever.

For three decades now, micro-engineering has enabled producers to put a TV, radio, voice recorder, health monitors, GPS and all manner of modern devices into a watch. The question is whether the average American consumer wants all those options – nearly all of which are available on an iPhone – in a watch. I remain skeptical. One big problem is the size of the watch dial/screen. By definition, a watch screen is small. It is limited by the size of the human wrist. One irony of the Apple Watch launch is that at the same time the company also launched iPhones with larger screens in response to complaints that current iPhone screens are too small. If you don’t like the screen size of your iPhone 4, you are going to hate the size of the screen on your Apple Watch.

Another irony: Apple CEO Tim Cook told the audience at the launch “You don’t want a phone strapped to your wrist. That’s not what the consumer wants.” But he does seem to think that consumers want a multi-purpose computer strapped to their wrists.

I am not so sure.

Here’s another problem. One cable news anchor, on learning that you need an iPhone to use the Apple Watch, asked: “Why do you need both?” Her point was that if the watch performs the same functions as the phone, why do you need it? The short answer is: You don’t. And for many people, if they don’t need it, they won’t want it.

But for all those who don’t understand why they have to have it, there are legions of Apple fans who can’t wait to buy it. One staggering bit of data about the launch event: 2.4 million tweets went out during Cook’s presentation. They weren’t all about the watch, of course. But it gives you some sense of the cult status Apple products enjoy. Apple has a passionate audience ready, willing, able and predisposed to purchase a brand new product from the company. Citi estimates that an Apple smartwatch will produce $4.2 billion in revenue in 2015 and $6 billion in 2016. If so, Apple will become overnight one of the world’s biggest watch producers in terms of revenue. For Apple fans, wearing the Apple Watch could become a status symbol, an emblem that says something about who they are: smart, techno-chic, plugged-in members of the tech-savvy avant-garde. A watch is more personal than any other product; it’s the only Apple product you can wear. Which perhaps explains why the company chose to call the watch the Apple Watch rather than the iWatch. They want to brand this baby. (“Is that an Apple Watch?” your friends ask? You simply nod knowingly.)

If that phenomenon kicks in, and Apple fans, despite the small screen and tiny battery life, honk that they certainly do want computers on their wrists, then the Apple Watch will be a game changer for smartwatches. The watch world has seen a brand gain cult status before, of course. Ever hear of Rolex?

This article was originally published on September 11, 2014, and has been updated.

11 Responses to “The Apple Watch: Pros and Cons”

Show all responses
Leave a Reply to MrTissot

END_OF_DOCUMENT_TOKEN_TO_BE_REPLACED 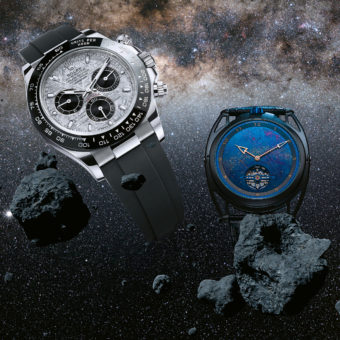