Last week, under a starlit Manhattan sky and against the backdrop of a fleet of fighter planes, Breguet inaugurated an exhibit of historic and modern pilots’ watches at a party on the deck of the U.S.S. Intrepid Sea, Air and Space Museum, New York’s most spectacular venue devoted to aviation.

Entitled “Breguet: Watchmaker, Aviator, Innovator,” the exhibit, which will be open for viewing at the Breguet Boutique on New York’s Fifth Avenue from June 19th to July 8th, celebrates Breguet’s history in the development and manufacture of aviation-inspired timepieces. The cocktail reception on the Intrepid was held on Flag Day, June 14th, and hosted by the Board of Montres Breguet represented by Rodolphe Schulthess, VP of Global Sales, Jean-Charles Zufferey, Head of Marketing and Michael Nelson, Breguet U.S.A. brand president. More than 300 guests were offered a private viewing of the exhibit and a sneak peak at the Intrepid museum’s newest acquisition, the Space Shuttle Enterprise. VIP guests included former “Top Chef Masters” winner Floyd Cardoz, and the evening’s entertainment was a performance by the “classically trained garage band” musical trio, Time for Three.

The exhibit itself consists of 26 Breguet watches, including 10 vintage timepieces on display for the first time in the United States. It traces the history of Breguet timepieces in the development of long-distance transportation, starting with the marine chronometer developed by Abraham-Louis Breguet in 1815, which helped usher in a more efficient age of ship and sea travel. The invention was adopted by the French Navy, and Breguet was appointed “Horloger de la Marine Royal” (watchmaker to the Royal Navy). In 1918, as the demand for aircraft began to overtake that for seagoing vessels, the Breguet watch company first began producing watches for aviators and also developed chronograph mechanisms that were mounted in cockpit instrument panels. Breguet’s ties to the French Navy grew as the need for military aircraft at sea became evident soon after the first planes took flight. The French ministry of war formed the French Naval Air Arm (“Aéronavale”) in 1910 and by 1913 was using Breguet planes in its fleet. For the next 60 years, Breguet planes were the primary aircraft used by the Aéronavale.

Aviation, as well as watchmaking, seems to be in the DNA of the Breguet family: Abraham-Louis Breguet’s great-great grandson, Louis-Charles Breguet, became a pioneering designer and builder of aircraft in the days when aviation was still a new industry. His contributions to the field are also honored in the exhibit, which includes an original Breguet Type XX watch and examples of Breguet’s “10Hz” technology, which is integrated into today’s updated version, the Type XXII.

After its initial run in the New York boutique, “Breguet: Watchmaker, Aviator, Innovator” will be on display at the Breguet Boutique in Bal Harbour from  July 12th to  July 29th, and complete its tour at the Breguet Boutique on Rodeo Drive in Beverly Hills from August 2nd to August 19th. Below you’ll find a clickable slideshow of images from the opening-night launch aboard the Intrepid.

END_OF_DOCUMENT_TOKEN_TO_BE_REPLACED 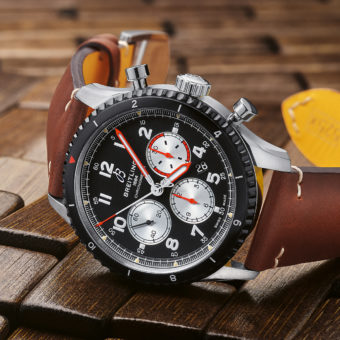 Currents in the Air: Reviewing the Breitling ...