In June 2020, Astrid Wendlandt launched Miss Tweed, a Paris-based, independent online publication specialized in the fashion and luxury goods sector. WatchTime sat down with her to talk about her mission, the state of the industry, skiing, and her “way of getting back at former French president François Hollande.”

WT: What made you launch the online publication?
AW: The luxury goods industry has become one of the main pillars of the global economy. I felt there was no genuine independent media — aside from wire news services such as AP, Bloomberg and Reuters which are generalist — who could provide reliable information on what was going on in this powerful industry. There are not that many professional providers of fair, balanced and accurate news specialized in the fashion and luxury industry.

Most media depend on the advertising budgets of big luxury brands. Therefore, they cannot bite the hand who is feeding them. And the industry’s No. 1 player, LVMH, controls some of France’s most influential publications such as Les Echos, Le Parisien, and recently it acquired 40 percent of the French weekly Challenges, which is one of France’s most respected business weekly. LVMH also owns a minority stake in Business of Fashion.

I launched Miss Tweed in June 2020, between two lockdown periods in France, because I had a major scoop about Richemont and I thought the timing was right to make this “leap of faith.”

WT: Can you tell us more about your background in the industry?
AW: I became Reuters’ first ever European luxury goods Correspondent in 2008. So, I have been covering this industry now for 13 years. Back then, Reuters wanted to promote me from Correspondent to Senior Correspondent and they were looking for a “safe pair of hands,” a person with a solid track record of breaking stories and who was regarded as a fast and reliable writer. I think this is why they offered me the job. Before that I was writing about telecoms and technology for Reuters, and in the early 2000s, I was Moscow and London Correspondent for the Financial Times.

WT: Why the name Miss Tweed?
AW: Because it is musically pleasant to my ear. “Miss Tweed” sounds joyful to me. Because Miss Tweed is short and easy to remember. “Miss” is my way of getting back at former French president François Hollande who banned the use of the word “Mademoiselle” in France in 2012. Now women are only called “Madame” in France. A Mademoiselle (as in Mademoiselle Chanel) was a woman who never married. It was a term also reserved for young ladies. “Tweed” refers to Sherlock Holmes’ tweed jackets and Chanel’s famous tweed.

WT: Can you tell us more about your audience?
AW: Most of my readers are heavyweights of the fashion, luxury and watch industry. They are CEOs, chairmen, CFOs, heads of departments, of regions, et cetera. Many work for Richemont, LVMH, Kering, Chanel, et cetera. There are now more than 2,000 people reading my newsletter every Sunday. Since many people share my stories for free (which violates copyright laws, but no one cares), prices are going to be increased sharply this fall. Also, since Miss Tweed provides competitive market intelligence (which costs a lot of money elsewhere), it is logical [and] fair that its subscription price reflects the reality of the market.

WT: Paid content is a business model that can rarely be found in the watch industry. What made you choose this model?
AW: Miss Tweed sells high-quality reliable information and analysis. It is a media that received accreditation from the French ministry of Culture in November, less than 6 months after Miss Tweed was launched. Miss Tweed is not a blog. Our press accreditation number is at the top of our webpage. Blogs are not regulated. Online media in France are. You need to meet certain requirements, like publish at least once a week; authors must sign their stories and so should the person who edited them; and the media needs to permanently employ at least one journalist with a press card and that person is me. Miss Tweed relies on a pool of six experienced editors. There are also regular contributors (who write for Miss Tweed) who are based in many different parts of the world, from the U.S. to China and London.

WT: What story are you most proud of?
AW: Our scoop on Kering and Richemont (revealing their tie-up talks, our story made Richemont shares rise six percent), on Richemont acquiring Delvaux, on Anthony Ledru becoming CEO of Tiffany & Co (we announced it in August, it was confirmed in January). And we should also mention our consistent reporting on the disaster that has been Kering’s adventure in watchmaking. The last story published earlier this month said that Patrick Pruniaux was trying to organize an MBO of Kering’s watch unit which includes Ulysse Nardin and Girard Perregaux. Kering officially says it does not know about it. It has no choice, for legal reasons. Otherwise, it would have to put these two brands under “assets under consideration for sale” and publish their revenues and losses.

WT: You’ve recently announced that you have won a €50,000 grant from the French Ministry of Culture. How will you invest it?
AW: Hire staff and increase expenditures on subscription management and marketing.

WT: The luxury industry, including the watch industry, is not really known to be transparent, yet it has “become one of the pillars of the global economy” as you’ve stated in your book. Why do you believe it is important that the industry has to “be challenged and held accountable”?
AW: Like a democracy, the luxury industry needs freedom of speech and freedom of press. Decisions need to be challenged. If there is no independent voice, luxury industry leaders get away with anything, they think that they can do what they want, treat staff badly, behave unethically, et cetera.

WT: What needs to change in the watch industry, in your opinion?
AW: Less ego and paranoia, more cooperation and free flow of ideas – which is what ultimately Miss Tweed wishes to promote. Miss Tweed is organizing a Davos of the luxury industry next year on April 7-10 in Val d’Isère. You are the first one I am saying this to!

WT: Why do you think the watch industry is struggling with fully embracing digital?
AW: Well, I think the watch industry has made a lot of effort in that domain in recent years. However, there is still some way to go. I think the industry’s reluctance to embrace the digital world has something to do with the fact it is traditionally focused on engineering and quality and less on storytelling and marketing. Alain-Dominique Perrin was the first one who taught watchmakers how to tell a good story and sell a watch brand.

WT: Your take on the certified pre-owned market?
AW: I am actually preparing a story on that very subject. I think the secondhand market has become a reliable yardstick to measure a brand’s desirability.

WT: Why does it make sense for a luxury group as successful as LVMH to venture into media?
AW: The luxury industry is about image building and image protection. Controlling the media, either through advertising budgets, or directly through direct ownership, guarantees that your image is protected.

WT: You’ve openly called the strategy of some watch brands “a disaster.” Have you ever gotten a call from a CEO?
AW: No, I am still waiting for someone to call. Please tell them they should if they are not happy about a story I wrote and I will gladly listen to them. However, since I always give CEOs and companies right of reply before publication, this is perhaps why I have never gotten a phone call yet.

WT: Who would you like to interview, and why?
AW: Alain Wertheimer, to ask him who will run Chanel in 10 years.

WT: What watches are you wearing?
AW: I only started wearing a watch when I turned thirty. I have only two watches, a Raketa (Made in Russia) and a Seiko which I love because it is very comfortable, chic and discreet. My wealth is in my skis. I am a former slalom racer — five times world champion at the Ski Club International des Journalistes, which meets once a year, organizes debates about news and the media, and organizes a giant slalom race. I own six pairs of skis and some of them are the best of the best.

WT: What makes a watch collectible, in your opinion?
AW: The story about who made it, when it was made, why is it unique, why it makes you dream.

WT: What watch would you wear if money wasn’t an object?
AW: An Ochs and Junior watch because of the man behind the brand, Ludwig Oechslin, who is such a legend in the industry. I love the simplicity and elegance of his designs. And I like the fact that there is no brand name on the dial.

To learn more about Miss Tweed, and its founder Astrid Wendlandt, follow this link.

END_OF_DOCUMENT_TOKEN_TO_BE_REPLACED

TimeOut With WatchTime Returns This Thursday, ...

END_OF_DOCUMENT_TOKEN_TO_BE_REPLACED 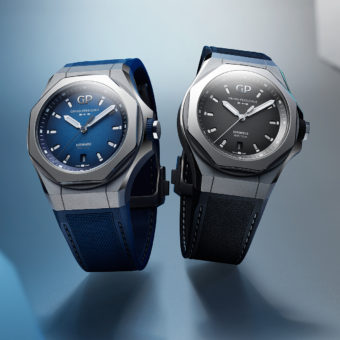