Tudor’s release of the first Black Bay Chronograph in 2017 was inarguably one of the watch world’s most intriguing stories that year, mostly owing to the timepiece’s use of a new movement sourced not from Tudor’s “big brother” brand, Rolex, but from stopwatch specialist Breitling. It was inevitable that new versions of the original, steel-cased Black Bay Chronograph would surface in subsequent years, but the one that debuted at Baselworld 2019 proved to be perhaps, an even bolder iteration than anyone expected. The Black Bay Chronograph S&G (Steel & Gold) is a vintage-look two-tone timepiece that will remind many Rolex aficionados of the classic “John Player Special” Cosmograph Daytona model of the late 1960s.

The Tudor Black Bay Chronograph S&G adds new materials and colors to its 2017 predecessor, using yellow gold for the bezel, crown and chronograph pushers, along with an anodized aluminum insert for the fixed tachymeter-scale bezel. All the now-familiar Black Bay hallmarks are present: the “Snowflake” hands characteristic of the Tudor dive watches used by the French Navy in the 1970s; the domed dial and crystal that were common on those selfsame watches; and the large winding crown from the 1958 Tudor “Big Crown” dive watch (Ref. 7924). Said crown screws into the 41-mm, stainless steel case middle for a water resistance of 200 meters and is decorated with Tudor rose emblem in relief.  Creating contrast with the matte black dial are two hollowed-out, Champagne-colored subdials at 3 o’clock and 9 o’clock — for the 45-minute chronograph counter and running seconds indication, respectively — and a date window at 6 o’clock. The chronograph pushers are said to have been inspired by those used on early Tudor chronograph watches.

Inside the bi-material chassis is the high-performance engine of this motorsport-influenced timekeeper, Tudor’s Caliber MT5813, based on Breitling’s automatic, integrated-chronograph Caliber B01. (The collaborative effort by the two Swiss brands has yielded benefits for both: Tudor acquired the B01 Caliber, Breitling’s in-house base movement, as the foundation of its first “independent” chronograph movement, while Breitling gained access to Tudor’s in-house base Caliber MT5612 to equip the three-handed models in its Superocean Heritage II collection). Tudor Caliber MT5813, to which Tudor has added its own in-house-developed regulating organ, retains all the considerable attributes Breitling packed into the B01 when it was first unveiled in 2009 for the brand’s 125th anniversary: bidirectional winding, a column-wheel controlled chronograph mechanism with a vertical clutch, a 70-hour power reserve in a single mainspring barrel, a non-magnetic silicon balance spring, a speedy 28,800-vph frequency, and a COSC chronometer certification.

The Tudor Black Bay Chronograph S&G is offered on three different strap/bracelet options: a steel-and-gold bracelet whose design and stepped construction are inspire d by the folding riveted bracelets (with visible rivet heads) on Tudor watches produced in the 1950s and 1960s; a black fabric strap made especially for Tudor’s Heritage watches on 19th-century Jacquard looms by a 150-year-old family company based in Switzerland’s Saint-Etienne region; or a “bund”-style strap in aged brown leather with ecru stitching. Prices range from $5,600 to $6,800. 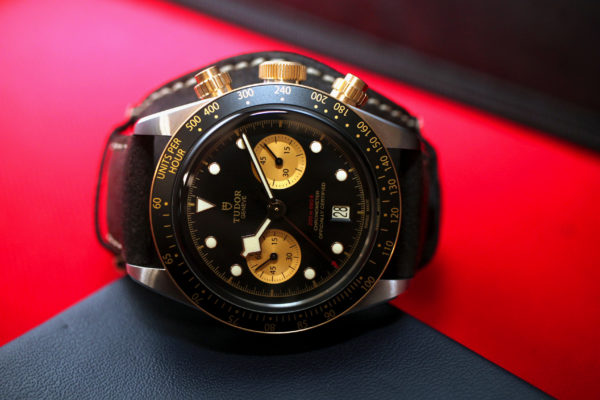 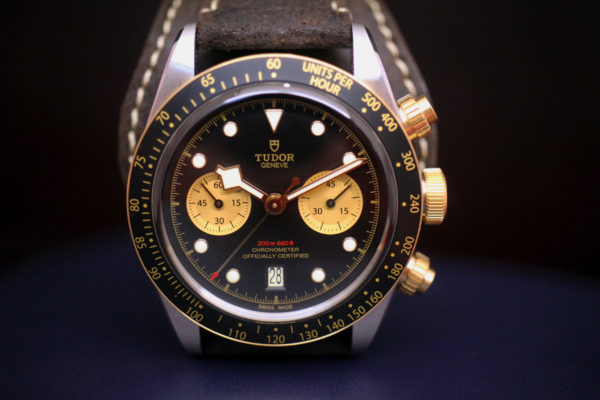