Unmistakably inspired by the styling of the original Luminor, the Panerai Luminor Due is a contemporary reinterpretation of that classic model from the ’50s. The new version has a slimmer case and a modern in-house movement with a micro-rotor for automatic winding.

Panerai inaugurated a new chapter in its history with the Luminor Due, introduced in 2016 and expanded with new blue-dialed editions this year. On the one hand, this watch preserves the styling of the original Luminor, which was designed for the Italian navy in the 1930s and supplied to them exclusively until the 1950s. On the other hand, this new model caters to the many aficionados who want to own a watch that has the look of the iconic predecessor but can be worn for all occasions.

The Luminor Due’s case is about 40 percent slimmer than that of the original Luminor. With a height of approximately 10.8 mm, the new model is slim enough to slip under the cuff of a dress shirt. It also looks attractive on a woman’s wrist, where it doesn’t appear overly masculine. The typical features of a Luminor are readily recognizable – and not only by connoisseurs. The pillow-shaped case is practically unmistakable. It traces its ancestry to the Radiomir from 1940. For the Luminor Due, too, the case and its massive strap lugs are milled from a solid block of steel. The lugs form a robust unit with the middle part of the case. And the glossy-finished architecture with its facets and softly shining sides looks more charming than earlier models.

The elegance is further accentuated by the narrow and steeply sloping bezel, which leaves the dial plenty of room for stylish classicism. The dial embodies a classically minimalist arrangement with four Arabic numerals at the cardinal points, baton-shaped indexes between them, and a subdial for the seconds at 9 o’clock. This ensemble is familiar from countless other Panerai references. The dial’s sandwich-style construction is likewise unmistakable. In this instance, the “sandwich” has a black, sunburst-polished upper part and a pale beige lower level. They team up with the hands to create a tasteful, retro charm. The shimmering black of the upper dial accentuates the elegant look. And as is usual for Panerai, the numerals, indexes and hands have a lasting, lush green glow in the dark.

And don’t forget the hinged guard over the crown that typifies Panerai watches and serves two practical purposes: protecting the crown against shocks and, with its built-in lever, keeping the crown firmly pressed into the case and thus optimally well insulated. This model’s case is watertight only to 30 meters, so it’s not suitable for bathing, swimming and diving. Therefore, the crown guard serves only to prevent dust from penetrating. Nevertheless, operating this little lever is a beloved ritual for Paneristi. When the guard is opened, the crown is released slightly from the case; afterward, the winding button can be pulled farther outward into its hand-setting position, although this extraction demands a bit of effort from the wearer. The lever must be opened before the crown can be withdrawn, but manual winding by turning the crown can also be accomplished when the crown guard is closed.

After the hands have been set, the hinged guard can be shut to press the crown back into the case. This is a useful function for to-the-second time setting, which is further facilitated by the fact that the Due’s movement, Caliber P.4000, is equipped with a stop-seconds mechanism.

Caliber P.4000, which was a precondition for the slim construction of the Luminor Due, also enhances the elegant character of a timepiece with forms and functions that concentrate on the essentials. This caliber animates nothing but three hands: one each for the hours, the minutes and the seconds. There’s no date display, and some Paneristi might lament its absence. The P.4000 is the slimmest movement ever developed and built by Panerai. Following its debut in the Radiomir 1940, it’s now being used for the first time in the Luminor Due.

Caliber P.4000 is a somewhat rarely seen type of movement with a micro-rotor for automatic winding. The smaller diameter of a micro-rotor lets it swing within, rather than above, the plane of a movement, thus helping reduce a caliber’s overall height.

Micro-rotors sometimes cause problems with the winding performance, but we didn’t discover any such issues in our test. In fact, just the opposite occurred. The movement spent most of its time on the wrist in fully wound condition, as was proven by the rate results. When the measurements taken while the watch was on the wrist were compared with those from the timing machine, we found that this model ran comparatively quickly on the forearm, where it gained more than 9 seconds per day. The average daily gain on the timing machine was nearly 6 seconds when fully wound and a bit more than 3 seconds after the watch had run for 24 hours. The timing machine also showed that the fully wound watch gained primarily in the dial-up and dial-down positions, where its gain was greater than its average gain on the wrist. A watch spends most of its time on its wearer’s wrist in these so-called “flat” positions, so this explains the rate deviations on the forearm.

The approximately 17-mm-diameter automatic-winding rotor is made from tungsten, a material with an uncommonly high specific gravity. The oscillating weight rotates in a zirconium ball bearing. In both of its directions of rotation, the micro-rotor automatically winds two serially switched barrels, which are positioned one atop the other. This construction provides 72 hours of power reserve, i.e., three days of autonomous running.

A close look through the sapphire window in the back of the case shows that several rubies are inset into the automatic bridge. Some of them serve as bearings for the third and fourth wheels, thus contributing to the slimness of Caliber P.4000. Others reduce friction when the rotor turns. These latter rubies are not continually in contact with the oscillating weight, but elastically return it to its proper position and assure that it again glides smoothly after it has strayed due to blows or shocks. In ordinary operation, the rotor “floats” slightly above these slightly domed jewels.

Connoisseurs will be familiar with the sturdy bridges in this construction from earlier Panerai calibers. A large portion of the movement is hidden under one bridge, while another one covers the balance, which has variable inertia and is paced at 4 Hz. Two screws can be turned to adjust the vertical play of the balance staff.

The oscillator can be finely adjusted by turning four tiny screws along the rim of the balance. The crowded conditions inside the Luminor Due could perhaps contribute to a slight imbalance in the rate of the P.4000. When we tested the Radiomir 1940 last year, the P.4000 ran with a much smaller deviation of rate and with greater regularity overall.

Notwithstanding these minor imbalances, the Luminor Due makes a very well balanced impression on the wrist. It’s handsomely appropriate for every occasion, partly due to its black alligator-leather strap, which has large scales but still looks quite elegant. The strap is slim, as is the case. And the wristband is well proportioned so the watch doesn’t tip forward. Even the pin buckle that’s screwed onto one end of the strap makes a more elegant impression than some of its counterparts from other brands. Nevertheless, the clasp preserves the angular lines and thus harmonizes with the rest of the Luminor Due as a unified ensemble that embodies the original aesthetics of an authentic Panerai watch.

8 Responses to “Luminor Number Two: Reviewing the Panerai Luminor Due”

Show all responses
Leave a Reply to Greg 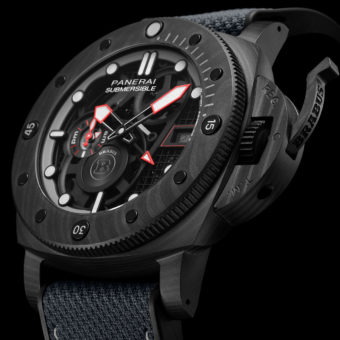 Panerai Partners with Brabus to Launch its ...