They’re not as sexy as tourbillons or as impressively complicated as perpetual calendars, but mechanical alarm watches possess one of the more useful complications for a weary traveler or an overworked executive needing a reminder about that big board meeting. In a way, it’s curious that more watch brands haven’t embraced them. Here are five that are on the market now.

The Jaeger-LeCoultre Polaris Memovox, a limited edition of 1,000 pieces, channels the spirit of the 1968 original, which was the first diving watch equipped with a mechanical alarm. Housed in its 42-mm steel case, the triple-crown-operated alarm is driven by the modern Caliber 956, a direct descendant of the very first self-winding alarm movement, created by Jaeger-LeCoultre, in the 1950s. The three crowns control the alarm function and time setting thusly: The first winds the alarm function and then sets the alarm and date when it’s pulled out. The middle crown allows adjustment of the bidirectional inner rotating bezel. The lower crown pulls out to adjust the time on the central hour and minute hands on the black, vintage-inspired dial, which is enhanced with “aged patina” luminous details. Price: $12,600. Click here for a full review.

The Heritage Advisor is a modern re-interpretation of an alarm watch issued by Tudor in 1957, with the same shaped lugs, Dauphine hands, and central red alarm hand as its ancestor but updated with a contemporary case size (42 mm) and material (titanium) as well as a cognac-colored dial with a combination of textured finishes. Tudor’s Caliber 2892, an ETA base movement with an in-house-developed module, features an alarm function in which the pusher at 8 o’clock activates and turns off the alarm, a crown at 2 o’clock sets the alarm time via the red hand, which points to the outer minute track, while another crown at 4 o’clock sets the time and date, the latter indicated on the counter at 6 o’clock. Price: $6,000 on leather, $6,225 on steel bracelet. Click here for more details.

The first Vulcain Cricket watch, named for the shrill, “chirping” sound of its built-in alarm, was released in 1947 and contained the revolutionary Caliber 120. The watch quickly became a hit and a favorite of U.S. presidents, inspiring Vulcain to give the Cricket its lofty nickname, “President’s Watch.” Vulcain has been creating new versions of the Cricket ever since, including the Heritage Presidents’ Watch limited edition, a historically faithful replica of a famous model from 1950. Vulcain’s manual-winding V-10 caliber ticks inside the 39-mm case, supplying energy to the alarm, which chimes for a full 20 seconds, from one barrel while storing the watch’s 42-hour power reserve in the other. The watch is offered in either steel or two-tone steel and rose-gold, each limited to 500 pieces. Price: 4,150 euros (approx. $4,600). For more on the Vulcain Cricket’s history with U.S. presidents, click here.

Breguet offers an alarm function in an elegantly nautical package with the Marine Alarme Musicale 5547, part of the recently redesigned Marine collection that takes its inspiration from founder Abraham-Louis Breguet’s historical role as chronometer-maker to the French Royal Navy. Debuting in a new 40-mm titanium case in 2019, the model has a sunburst slate gray dial with an array of indicators: alarm subdial at 3 o’clock, 24-hour subdial at 9 o’clock, alarm activation aperture at 12 o’clock, and a power reserve display for the alarm between the IX and XII Roman numeral appliqués. The self-winding 519F/1 caliber uses a pushbutton at 8 o’clock to operate the alarm and possesses two separate barrels, one providing energy to the main movement, the other to the alarm’s striking mechanism. Price: $28,600. For an overview of Breguet’s revamped Marine collection, click here.

The fruits of a collaboration between Richard Mille and Airbus Corporate Jets (ACJ), the RM 62-10 Tourbillon Vibrating Alarm ACJ represents the watchmaker’s most complicated timepiece ever and also the most technically sophisticated alarm function on the market. In contrast to most traditional wristwatch alarms — which use a hammer striking a pillar, a gong, or the interior of the case — the one in the RM 62-01 is absolutely silent, transmitting a vibration that only the wearer can perceive in a similar manner to the vibrating alert function in early mobile phones. The mechanism inside the tonneau-shaped titanium-carbon TPT case of this 30-piece limited edition, however, is entirely mechanical, made up of 816 parts, including two barrels for the 70-hour power reserve as well as a tourbillon. Price: $1,225,000. Click here for more info.

No Responses to “Wake-Up Call: Five Watches With Mechanical Alarms”

Show all responses
Leave a Reply to michael russo

END_OF_DOCUMENT_TOKEN_TO_BE_REPLACED 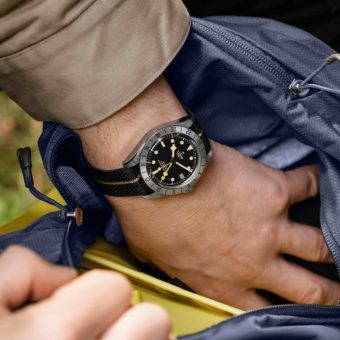