The Timex Group’s grand foray into the high reaches of the luxury mechanical watch market is ending. Swiss media are reporting that Timex is shutting Vincent Bérard S.A., the La Chaux-de-Fonds-based manufacturer of luxury mechanical watches, that it acquired in 2006. While neither Timex nor the Vincent Bérard firm has made any official announcement, sources close to Timex have confirmed to WatchTime that the Swiss reports are true.

Vincent Bérard, from a 2007 WatchTime feature.

The Vincent Bérard firm was founded in 2003 by Bérard, a French watchmaker and antique watch restorer who had worked in Switzerland for nearly 30 years. He launched his own brand in 2005 and began producing large carriage-style pocket watches. The next year, in a surprise move, the Timex Group acquired the firm, housed in a small atelier in a farmhouse in La Chaux-de-Fonds. At the time, Timex was in the process of transforming itself from the legendary king of the mass market into a multi-brand watch group active in all price segments. Vincent Bérard gave Timex a foothold in the then-booming luxury mechanical watch market. Timex invested in the firm, expanding the atelier and hiring staff. The next year, the first collection of Vincent Bérard wristwatches appeared. Bérard produced about 100 pieces per year, priced between $70,000 to $150,000.

Three years later the Bérard brand is the latest watch casualty of the global financial crisis. The La Chaux-de-Fonds newspapers L’Impartial and Le Matin as well as RTN (Radio Télévision Neuchâtel) have reported that the manufacture will close and its 20 employees, including Bérard and CEO Herbert Gautschi, will be laid off. Unia, Switzerland’s largest union, confirmed the news the week of July 5. Loïc Dobler, a Unia representative, told L’Impartial that he was in discussions with Timex about terms of the employee terminations.

The Bérard firm was known to be struggling. In June, Daniel Dodane, a member of the Vincent Bérard board of directors, told the Swiss watch Web site World Tempus, “The financial crisis and the economic decline have prevented our group from achieving the sales necessary to make a profit. As a result, the company has not reached our commercial objectives and the losses are significant.” (Dodane is deputy managing director of Opex S.A., a French watch company owned by Timex and is the only Timex executive authorized to talk about the Vincent Bérard situation.)

Still, news that Timex was pulling the plug on the brand seemed to catch employees by surprise. In June, for example, CEO Gautschi attended the Couture jewelry and watch trade show in Las Vegas, manning a Vincent Bérard booth, and hoping to open new accounts in the United States. RTN reported that the employees were devoted to the company and were hoping to find a buyer for the brand. If they don’t, Vincent Bérard will join the list of brands like Villemont and Wyler Genève that are casualties of the Great Recession.

END_OF_DOCUMENT_TOKEN_TO_BE_REPLACED 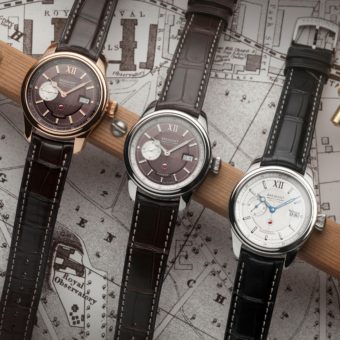 The Bremont Longitude, With the Brand’s ...