WatchTime New York 2022 is less than two months away, returning for the seventh time to Midtown Manhattan’s Gotham Hall on October 21-23. Well-known German watchmaker Glashütte Original is one of more than 30 participating watch brands set to showcase its latest timepieces there, including with the new PanoMaticCalendar launched in June of this year.

The original Pano watches arrived to market around the turn of the millennium, being so named for their signature “panorama date” style. Since the collection’s initial debut, it has seen a major update in 2012 and a number of smaller updates since, along the way becoming one of Glashütte Original’s most significant and expansive design families. Last year, the brand released its previous update to the design family in the PanoMaticLunar Red Gold Green Dial. Its newest release in the PanoMaticCalendar follows that model’s success, with the novelty premiering a new movement and the integration of the annual calendar complication to the Glashütte Original portfolio.

The new PanoMaticCalendar features a 42mm case that is available in red gold and platinum; each version offers a distinct Glashütte Original style and channels a long-established Pano silhouette. Whether cased in red gold or platinum, both options make use of alternating polished and satin-brushed surfaces, with the meticulous finishing luxuriously working with the light and to keep your eye’s attention.

To complement the either warm or cool motifs of each precious metal version of the PanoMaticCalendar, the two watches opt for unique dials. For the platinum edition, the display makes use of a skeletonized style with galvanic black details, creating an appealing and uncommon contrast between the dark, the industrial, and the refined. For the red gold edition, the display features a silver opaline aesthetic, with a “vinyl-type” decorative pattern elevating the style with more warm tones and an overall very clean execution.

The asymmetric design of the PanoMaticCalendar dial is an unmistakable design element of the entire Pano collection. In this vein, the latest design features the characteristic asymmetrical arrangement of the time display and small seconds. Complementing the moon phase display at 2 o’clock is an innovative month display beneath a sapphire crystal window between 6 and 3 o’clock. The annual calendar indications are completed by a date window at 4 o’clock.

The PanoMaticCalendar presents with it the debut of a new in-house manufacture movement, with the non-skeletonized caliber 92-09 powering red gold edition, and the caliber 92-10 driving the skeletonized platinum model. The movement notably allows for an annual calendar functionality for the watch, theoretically allowing a wearer to only require a single adjustment per year at the start of March to ensure proper and accurate timekeeping. Both versions of the caliber are rhodium plated and visible via a sapphire exhibition caseback, with the platinum edition’s caliber 92-10 featuring a particularly striking coating of black rhodium in addition to its already particularly impressive finishing and style.

The distinctive and luxurious Glashütte Original PanoMaticCalendar is available now in red gold priced at $29,000 on a non-limited basis, while the platinum edition will be limited to 150 examples and is priced at $39,100.

To see the new watch in person, along with hundreds of other new, rare, and interesting timepieces, be sure to reserve your tickets now for WatchTime New York 2022!

END_OF_DOCUMENT_TOKEN_TO_BE_REPLACED 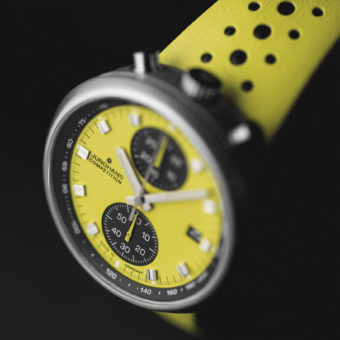