It’s been a little over six months since we first heard the news that Leica was branching out from its position as a longtime leader in the camera industry and into the world of watchmaking. The reaction at that time by industry pundits and enthusiasts was one of mixed enthusiasm. Would this be another example of a brand overstepping its boundaries and thinking that they could slap some branding on a Chinese quartz watch and sell it for a lucrative profit? It’s a trap that many prestigious brands of all sorts of industries have fallen into.

It’s a good thing then that Leica, renowned for its quality control and precision mechanics, didn’t disappoint when prototypes of its two initial models, the time-and-date-only Leica L1 and the Leica L2 GMT, arrived stateside for the first time. We were able to spend some extended time with the attractive and technically intriguing L2 GMT a little while back, and the level of quality and detail found not only surpassed our initial expectations but also made us excited to see what else is to come from this new initiative.

The most important thing to discuss from a watch enthusiast perspective when it comes to the Leica L2 GMT is its innovative — and exclusive — movement that was built for Leica by Lehmann Präzision GmbH out of Germany’s Black Forest. Leica said that maintaining the “Made in Germany” designation was extremely important so finding a local manufactory was one of the brand’s top priorities when it began work on its watch division. Lehmann is a name that might not be familiar to many American watch enthusiasts, but to any of our Teutonic friends, you might recognize them as the producer of Lehmann Schramberg timepieces. Lehmann Präzision is also a major supplier of precision machinery throughout the Swiss and German watch industry.

But what’s so special about the movement anyway? To start with, manually-wound Calibers L1 and L2 both feature a column-wheel mechanism that enables the time setting. Similar to a pusher on a chronograph, you give the fluted crown a quick push and, voila, you are now able to set the time like you would on any watch. There’s a small aperture located to the left of the date window at 3 o’clock that will flip from white to red when the setting mode is enabled. A push of the crown also automatically resets the seconds to zero in order to make setting the time to the exact second an easier endeavor. Constructing a zero-reset complication is more complicated than you might think and is typically found on timepieces that approach six figures, like the GPHG-winning Akrivia Chronomètre Contemporain. Leica has achieved two patents for this push-craft construction.

Not only is the caliber used in the L1 and L2 technically impressive, but it’s also extremely good-looking. During my time with the watch, I often flipped the model over when discussing it with industry friends to showcase its appearance. The finishing, although straightforward compared to German compatriots like Glashütte Original or A. Lange & Söhne, is handled by Leica at its new high-concept workshop, Ernst Leitz Werkstätten, in Wetzlar, Germany along with each model’s final assembly.

In addition to the push-piece crown, the L2 GMT has a number of other differences from the L1. GMT functionality is enabled by the interior rotating bezel which can be set using the knurled lower crown. It’s an efficient display that makes adjusting your second time zone a simple task. Finally, the top pusher controls the quick-set date. The L2 GMT features two additional functions on its dial. To the left of the small seconds, a power reserve indicator displays how much of the 60-hour power reserve remains before it needs to be wound. The L2 also features a conical day/night indicator next to the time-setting aperture on the right side of the dial.

There are a few recognizable Leica attributes to the watches that are immediately noticeable. The fluting of the crown and the domed shape of the crystal are meant to recall a camera lens. The scratch-resistant sapphire crystal is also anti-reflective on both sides. Although it won’t fit under a shirt cuff with a size of 41 mm by 14 mm, the lugs contoured nicely to my smallish wrists without hanging over. 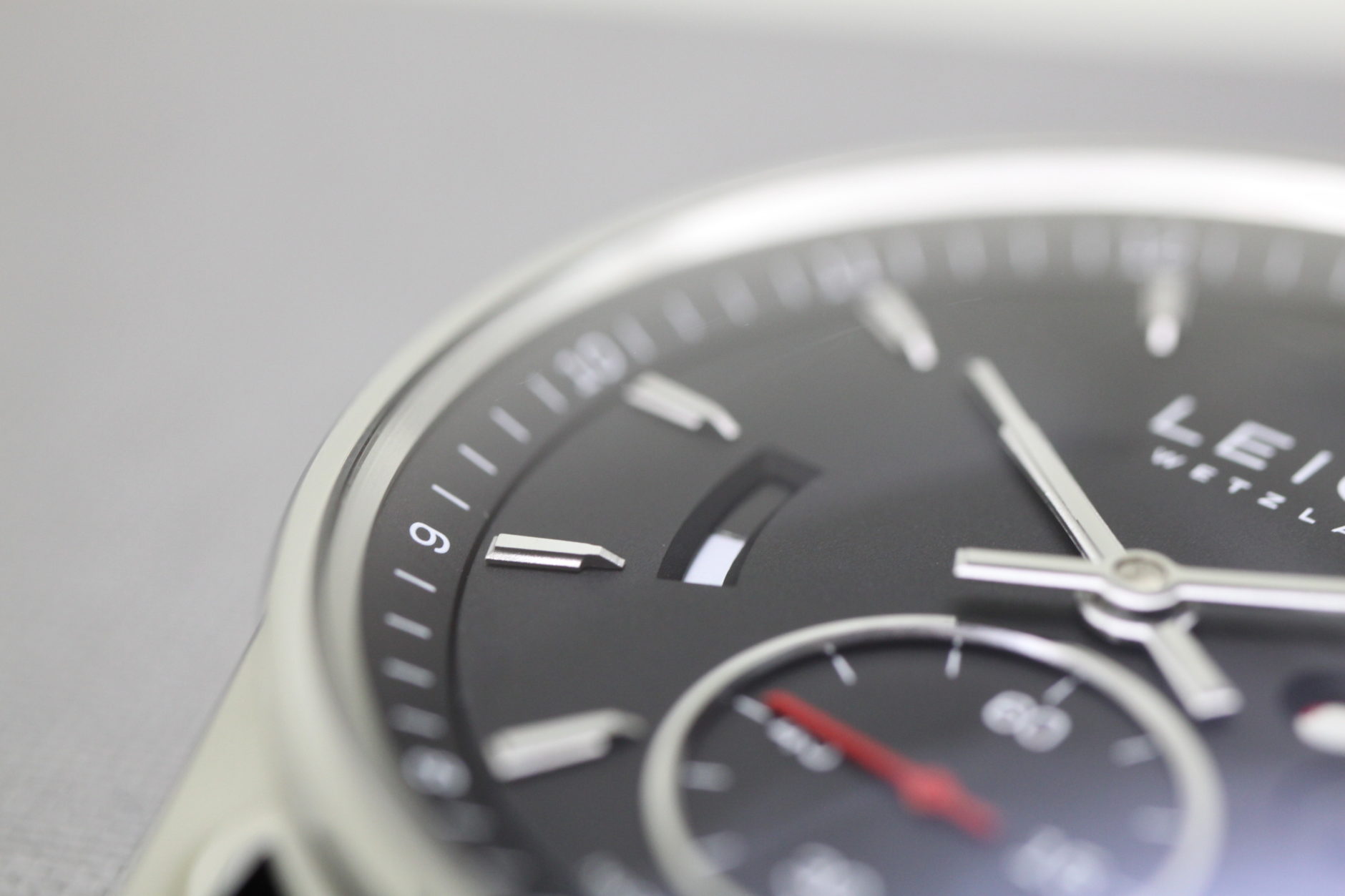 The indexes and hands both feature a multi-level construction with a high-level of finish and a slight slope.
1/2 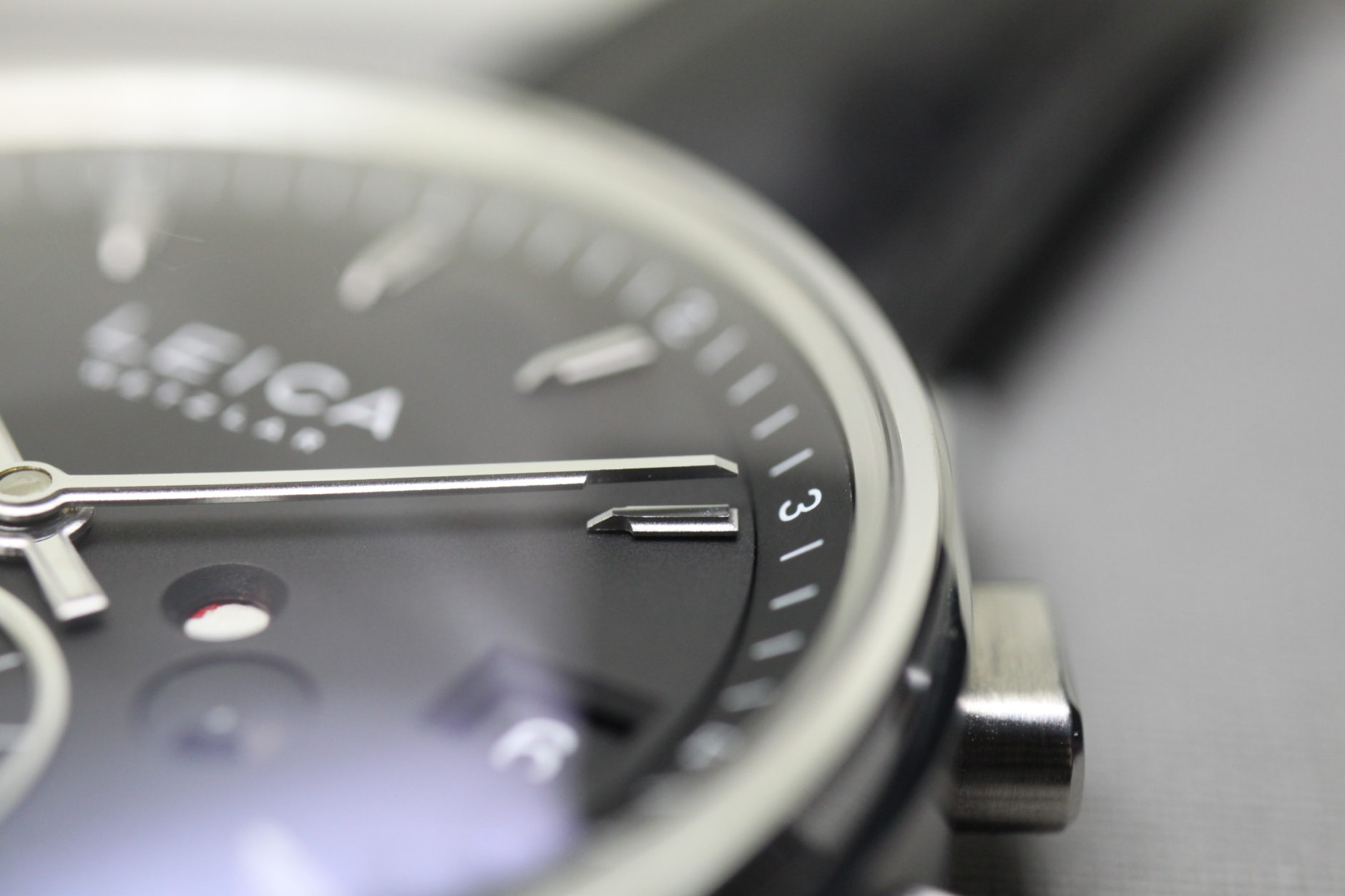 The indexes and hands both feature a multi-level construction with a high-level of finish and a slight slope.
2/2

All of the capabilities of the L2 take a moment to comprehend but are extremely intuitive once they’ve been fully explained. These intricate details are also what helps the L2 stand out compared to other timepieces released by luxury marques looking to expand their market share. Leica has a long history of dealing with camera collectors, the one group of collectors that might surpass watch enthusiasts in their meticulous ways. Production of the caliber and timepiece started in 2013 and Dr. Andreas Kaufmann, Chairman of the Board of Leica Camera, has been holding a watchful eye over the division ever since.

One of the most memorable experiences I had while wearing the Leica L2 GMT involved the overall depth of the timepiece. A straight-on glance at the watch makes it appear completely flat, but if you look from the sides, the domed nature of the crystal reveals just how intricate all the levels to the applied baton-esque indexes and the hands, with its intricate diamond-finish, are. Not only does this elevate the watch’s appearance and make it a joy to look at, but it also adds to a feeling of resolute accuracy thanks to the square-shaped tip of the hands that gracefully glide across the edge of the dial. Even the seconds subdial offers up a raised barrier, with the same diamond finish, surrounding its annular design. At the end of the day, it is small touches like this that help make a watch memorable. And, at least for me, the Leica L2 GMT has this in spades. As Leica moves onward with its watch operation, I’m looking forward to seeing if this specific design language — and the impressive level of technical innovation — remains the same.

Whenever a non-horologically inclined luxury brand ventures into the watch sphere, there’s usually a decent amount of skepticism among general consumers and the educated enthusiast. And that’s totally fair. Many outsiders to our inclusive world only see dollar signs when they look at the watch industry from afar. Kaufmann, who is a watch enthusiast himself, told me that he wanted Leica “to be true to its heritage” and “different” from all other brands. Kaufmann doesn’t envision his watches to be solely for existing Leica collectors either, he wants to reach a demographic of people that are knowledgable of Leica’s abilities but may have never purchased a camera.

“I think the Leica customer we’re thinking of already has quite a few watches,” he says. “So there’s probably an overlap, but the appeal has a sort of crossover with people who might have heard of Leica, but are not into cameras, but are into small-production watches. I would say only ten percent of our customers are collectors. Which means they collect quite a few things like cars, cameras, and even watches. So there’s a sort of [natural] overlap.”

The price of the watch, at $16,500 in stainless steel, is rather high and is clearly targeted towards the high-caliber enthusiast looking for something different, not only in design, but in capability as well. Keep an eye out for the next Leica timepiece, the L3 with an alarm complication, to be released later in 2019.

No Responses to “Borrowed Time: Hands-On with the Leica L2 GMT”