A few minutes into my phone conversation with Ian Schon, the 29-year-old mechanical engineer and product designer touches on an aspect of his creative process that immediately grabs my attention.

“My watches are a result of ‘slow watchmaking,’ ” he tells me. “Watchmaking where you really take your time. Where you have a lot of hands in the process so there’s not a lot of automation.”

Schon is prescribing the Slow Movement, which has found its footing in the worlds of fashion, design, food, and cinema, to watchmaking. What the Slow Movement does is flip ingrained public institutions like “fast food” and “fast fashion” on their head to emphasize quality and the benefits of taking one’s time. I was familiar with its application in other subcultures, but this was the first time I’d heard it directly applied to horology.

As it turns out, watchmaking is an ideal fit for the concept. While automation runs the gamut across most of the industry these days, haute horlogerie is still alive and well and there are plenty of independent makers that present themselves as strong ambassadors for the benefits of handcraft.

Schon approaches his operation a little differently than a Swiss purist with decades of horological experience might. Like many of his contemporaries in the growing American watch scene, Schon doesn’t profess to be a trained watchmaker – at least in the traditional sense. What does differentiate him from the proliferation of “microbrands” that rely on dropshipping and social media marketing to build their identity is the watches themselves. Schon leans on the experience he gained while running Schon DSGN, a successful pen manufacturing business, to produce, mill, and finish his hands, dials and a number of other components in his Philadelphia-based workshop. For movements, he relies on recently serviced new-old stock ETA calibers from the 1960s that he purchased in bulk.

Schon first launched his pen company while still an undergraduate at Boston University. After successfully raising $70,000 through Kickstarter, he built out a diverse lineup of pens that come in a variety of finishes and in metals like aluminum, stainless steel, brass, copper, and titanium. After a few years, when the pen business had fully taken off to the extent that an outside manufacturer was brought in to meet demand, Schon was left feeling a bit out of sorts.

“I was a little bummed because when I started [Schon DSGN], I was making every single pen by hand,” says Schon. “It took me six hours to make a pen. I wanted to get back to the hand making of things. Because all of a sudden when you enter product development you’re building drawings, and designs and 3D CAD models, but you’re not necessarily the one who’s going to make them. It’s very rare that you get to turn the handles of a machine and make something. So, I started playing with watches to get back to that handcraft, to get back to machining by hand.”

Today, Schon has two timepieces on offer within a single collection called the Dot. The main differentiator between the two models is the dial. The Cardinal timepiece was the first watch that Schon designed and its dial is a play on classic-sector styling with an emphasis on depth. The Prismatic watch has a blue titanium dial that is the result of an anodization treatment that creates its shimmering color through a natural oxide. The proverbial “Dot” comes from the drilled minutes track that runs around the periphery of each dial. Above 6 o’clock, there’s an aperture with a running indicator where instead of a traditional seconds hand, a plate made by Schon constantly rotates underneath the dial and displays either a small line or a dot every 10 seconds to add a dash of kinetic intrigue to the watch.

Schon began his watchmaking career by designing cases for some old movements that he had lying around. From there, he began designing dials and hands, researching various textures to bring the same quality of finishing he applied to his pens to the watches, and finally, purchasing the machines to make the dials and hands in his workshop. A nearby manufacturing partner assisted in the production of all the cases for the Dot series according to Schon’s specs. However, every watch that Schon produces is hand assembled and finished by him from start to completion inside his workshop. 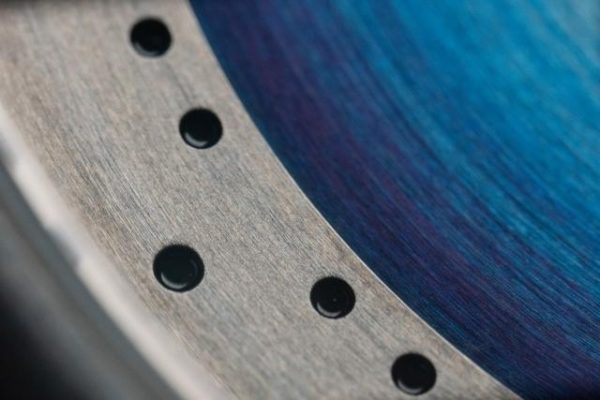 The Prismatic and Cardinal are both limited to a total of 50 pieces and start at $5,200 in a 37-mm titanium or stainless-steel case with custom options available. Each watch is made to order and individually hand numbered. It takes about 10 weeks to produce each watch after the order is received.

No Responses to “Made in America: Slow Watchmaking at Schon Horology”