Ten years after the groundbreaking InnoVision 1 concept watch, Ulysse Nardin unveils InnoVision 2. Anyone worried that Ulysse Nardin might have lost its appetite for innovation in the wake of the death of long-time owner, Rolf Schnyder, in 2011, and its takeover by France’s giant Kering Group in 2014, will be heartened by UN’s launch of its new InnoVision 2 Freak concept watch.

InnoVision 2 is the brainchild of Patrik Hoffmann, whom Schnyder handpicked to succeed him as the company’s CEO. It comes on the 10th anniversary of the original InnoVision, and like that one, contains 10 recent UN innovations in mechanical watchmaking that the company hopes to use in watches in the future.

That was the idea behind InnoVision 1. That watch showcased Ulysse Nardin’s pioneering work in selective photolithograpy technology. It contained mechanical movement parts made of silicon fabricated by exotic production techniques like DRIE (deep reactive ion etching) and LIGA (lithography, electroplating and moulding). Two highlights of the InnoVision 1 Freak watch were its silicon hairspring and silicon shock absorber, both of which UN now uses in its watches. In fact, says Hoffmann, “Eight of those 10 innovations are now in our timepieces in some form. This is crucial because it shows it was not just a marketing stunt.”

Hoffmann briefed WatchTime on InnoVision 2 at the SIHH show in Geneva in January, where Ulysse Nardin introduced the watch. He decided to produce InnoVision 2 last year, he says. “We have so many innovations going on. At one point, I said ‘Guys, let’s pack them into one Freak like we did in the InnoVision 1. It’s been 10 years; let’s do the same thing.’ And we started to pick and choose which 10 we wanted to put into this InnoVision piece.”

The Freak, of course, was Ulysse Nardin’s groundbreaking watch introduced in 2001. It had no dial, hands or crown. Instead, the revolving movement indicated the time: The hour indicator was on the mainspring barrel and the escapement bridge served as a minutes hand. It was the first mechanical watch to use silicon (called silicium in Europe) components in the movement. As the showcase for the company’s innovation and experimentation, UN uses it for its concept pieces. Here, briefly, are the 10 innovations in InnoVision 2:

UN has created a new automatic winding mechanism whose radical redesign transforms even the slightest movement of the wearer’s wrist into energy to wind the mainspring. Ulysse Nardin calls the mechanism “the Grinder.” Hoffmann says it was this invention that triggered his desire for another concept watch.

UN’s design has a central ball-bearing rotor, with three smaller ball bearings beneath it. They operate on a flexible, filigree-shaped frame. Attached to this is a ring with four levers that UN calls “springy ratchets.” Conventional automatic winding systems with a dual-direction rotor have two levers, which leave a lot of inefficient idling. “It’s like you are on a bicycle with two pedals,” Hoffmann says. “You always have that idle in between pedaling and you have idle torque.” The Grinder “is like having four legs and four pedals. It keeps going,” dramatically improving winding efficiency. The other breakthrough is the flexible frame, which converts the tiniest motion of the wrist into energy to wind the mainspring. “If you move this in any direction, it will wind. No matter how little I move, it will always wind. It’s never idle.”

InnoVision 2 features a new sophisticated constant force escapement that UN calls the Dual Constant. It’s an evolution of the Dual Direct escapement that was in the original Freak watch of 2001, combined with the Ulysse Anchor escapement of 2014, Hoffmann says. The Dual Constant has a complex structure with locking elements and flexible silicon blades. The blades are a key feature because they are not dependent on the tension of the mainspring. This means that friction is reduced and the small pulses of energy transmitted to the balance wheel and hairspring are always equal and constant over time, assuring superior accuracy.

Ulysse Nardin manufactures the Dual Constant escapement out of flat monocrystalline silicon wafers using the DRIE method. Because of the extreme complexity and three-dimensional structure of the escapement, UN produces two micro-components, which are then fused into one complex three-dimensional element. “For the first time, we have bonded silicium,” Hoffmann says. “We have two silicium parts that are bonded through an oxidation process.” This silicon bond, which turns two parts into one, was developed by Ulysse Nardin. “It opens up a new world in using silicium for more complicated parts of different heights,” Hoffmann says.

InnoVision 2 has a new balance wheel, which, like the balance spring, is made of silicon. One unusual feature of the new wheel is that its regulator levers are shaped like paddles. Hoffmann explains why. “The oscillator’s 28,800 oscillations create a wind flow within the movement. That wind has an influence on the accuracy. If you have a timepiece in a vertical direction or a horizontal direction, the wind changes and it will change the accuracy of the timepiece as well. So, what the engineers did was create paddles on the oscillating wheel. Those paddles create a wind flow, which stays constant and the whirl is always the same. This helps to keep the accuracy the same whether the timepiece is in a vertical or horizontal position.” Four gold elements on the wheel are used to adjust the moment of inertia to improve precision.

UN has pioneered the use of new materials in mechanical watchmaking. In 2007, it introduced a process of coating silicon components with a synthetic nanocrystalline diamond film for increased durability.

Now it has developed a patented method for coating silicon with a thin film of sapphire. Sapphire (corundum) is the second-hardest raw material, after diamond. The watch’s elongated center wheel bridge has a one-micrometer-thick coating, giving it a harder surface and higher mechanical stability.

The gear wheels in InnoVision 2 are not made of brass but of hard gold, produced using the LIGA process. Gold ensures a more efficient transfer of force, UN says, which improves the power reserve.

Decades ago, Ulysse Nardin produced deck chronometers with hairsprings made of glass, Hoffmann says. “So, we started to experiment again making a few things in glass.” In Inno- Vision 2, the balance wheel bridge (or cock) and the entire shock protection system is integrated into a single piece made of glass. (In InnoVision 1, they were made of silicon.) UN chose glass because of its strength and flexibility. (“It is nowhere near as fragile as it might appear to be at first glance,” the company says in a statement.) And its transparency. “We have a technology,” Hoffmann says, “where we can laser into the glass any kind of channels, which we can fill with Super-LumiNova. We can create any kind of shape we want.” Ulysse Nardin used the technology to laser the initials “UN” inside the glass balance wheel bridge in the new watch. The Super-LumiNova in the channels illuminates the bridge in the dark.

The watch’s minutes hand is also made of glass. It is a three-dimensional glass sculpture manufactured via precision laser cutting, which surrounds the escapement bridge. For stability, it sits on a metal plate.

The company has developed a new 24-hour time indication system: During the first 12 hours of the day, the numerals 1 through 11 appear in the apertures in the hour ring. At noon, the numerals in the apertures change to show 11 through 23. The numbers are printed on a ring, which is moved directly by the barrel. In all, 11 patents have been issued or are pending for InnoVision 2. “Mind you, it’s a concept watch,” Hoffmann says. How many of the 10 innovations will be commercially viable, he can’t predict. “Maybe five, maybe six, maybe two. I don’t know. Just like the first time.” What he does know is that the spirit of technical innovation, with which Schnyder revived the struggling company after he acquired it in 1983 (it had one full-time employee at that time), remains a core value of the brand. “This is a very, very strong statement for Ulysse Nardin,” Hoffmann says. “This is to show the future of Ulysse Nardin.” Hoffmann, who was close to Schnyder, thinks he would be pleased. “He would be delighted about this. He would freak out,” Hoffmann says with a smile. The pun, of course, is intended.

No Responses to “Déja Vu All Over Again: Ulysse Nardin InnoVision 2”

END_OF_DOCUMENT_TOKEN_TO_BE_REPLACED 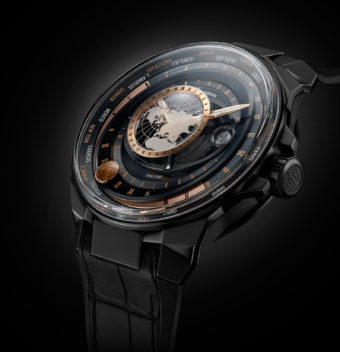