Great Britain’s Christopher Ward was the first modern-day U.K. watch brand to develop an in-house caliber in the 21st century, and now it becomes the first watchmaker — British, Swiss, or otherwise — to revive a style of divers’ watch that was once immensely popular but has languished as a relic of the past for almost 50 years — the so-called Super Compressor case. Here is what you need to know about the all-new C65 Super Compressor and why it’s such a major deal.

“Super Compressor” was the name given to a type of complex-structured dive-watch case, developed and manufactured by the Swiss firm Ervin Piquerez and used by watch brands from IWC to Tissot to Jaeger-LeCoultre to Girard-Perregaux, among many others, from the late 1950s through the 1970s. It was designed to increase its strength and integrity as it descended deeper underwater, with external pressure on the caseback compressing the O-ring gasket, and included a rotating bezel, operated by a second crown, under the crystal rather than outside the case. While several watch brands in the modern era have used the Super Compressor as a design inspiration for their dive-watch cases, a “true” Super Compressor has not been on the market since E. Piquerez discontinued production of the style in the 1970s (and eventually went out of business in the 1990s).

For the new C65 Super Compressor, which arrives in two dial colors and an array of bracelet options, Christopher Ward “reverse engineered” the original design to create its barrel-shaped case, with the built-in 300-micron-thick compression spring that bestows the case its name. Measuring 41 mm in stainless steel and 13.05 mm thick, the case has two screw-down crowns on the side — one for winding and setting the time, the other for setting dive times on the inner bezel, which rotates with 120 distinctive clicks. Under a box-type sapphire crystal, the dial (in “Ocean Blue” or “Black Sand”) features Super-LumiNova Grade X1 GL C1 on the hands and indices, the latter with diamond-polished facets. The seconds hand has Christopher Ward’s signature Trident-shaped counterweight.

The outer case ring that allows for a view of the compression spring is colored orange, a color also used on the crown for the inner bezel, the bezel’s orientation triangle at 12 o’clock, and the seconds hand’s tip. The ring is made of anodized aluminum and is stamped with a diver’s helmet. Inside the 150-meter water-resistant case, behind an exhibition back, a Swiss-made Sellita SW200 automatic movement beats at a brisk 28,800-vph frequency and amasses a power reserve of 38 hours. The rotor is decorated with a twin-flag engraving over a Colimaçone finish. The Christopher Ward C65 Super Compressor is not only the first “real” Super Compressor divers’ watch of the 21st Century; it’s also accessibly priced, starting at 895 British pounds on a strap and 1,000 pounds on a steel bracelet.

Show all responses
Leave a Reply to Tissot 1853

Silent Accord: Reviewing the Grand Seiko ...

END_OF_DOCUMENT_TOKEN_TO_BE_REPLACED 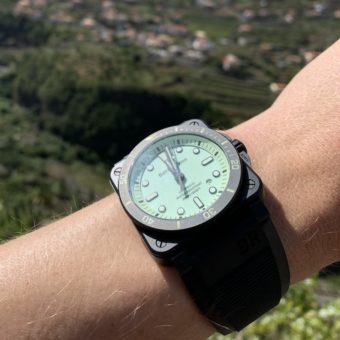