If you missed the Grammys last night, don’t worry. All you need to know is that Bruno Mars took home quite a few awards. Six, in fact. In light of his domination, you may have missed the one thing watch enthusiasts keep an eye out for when they watch the annual “Best in Music” showcase: What watches are the artists and celebrities wearing?

The big news on that end is that Bulova, in its second year sponsoring the show, handed out a specially designed watch to each winner. Which begs the question — did Bruno Mars receive six watches for each Grammy he received?

The Limited Edition 60th Anniversary Grammy wristwatch, from the Precisionist collection, features a dial constructed from Grammium, which, if you didn’t know, is a custom alloy developed specifically for the iconic gramophone statue that is given to all Grammy award winners.

Since the watch is from the Precisionist collection, it’s powered by the brand’s three-prong quartz crystal movement. Unlike other quartz timepieces, this watch beats at 262 kHz, which translates to 16 ticks per second producing a buttery-smooth seconds hand. It’s accurate to within five seconds per month, which is far better than most quartz models, and has become the tentpole collection for the brand among serious watch enthusiasts since it was first released in 2010. The watch has an anti-reflective sapphire glass, a screw-back case with the Grammy logo, and a black rubber and crocodile-embossed gray leather strap. There’s a nice nod to this year’s show at the center of the dial: the sound wave is shaped like the New York City skyline to commemorate the return of the ceremony to New York for the first time since 2003.

The Bulova 60th Anniversary Grammy’s wristwatch is exclusively available for purchase at Macy’s Herald Square in New York City and Macys.com. It costs $1,150.

END_OF_DOCUMENT_TOKEN_TO_BE_REPLACED 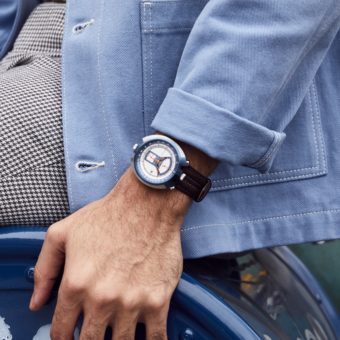