On November 11, 1918, the Armistice marking the official end of World War I was signed. On that same date, Georges G. Schaeren founded the Mido watch brand, which celebrated its centennial this year with the release of a host of special-edition timepieces and, on May 24, a major celebratory event in one of Mido’s biggest markets, Mexico City. (The brand has a long history of popularity in Latin America: the name Mido comes from the Spanish phrase “Yo Mido” or “I measure”.) I had the opportunity to attend the gala, as well as experience some of the historic sites, culture, and cuisine of Mexico City, all while sporting on my wrist one of those selfsame anniversary-inspired watches, the new Mido Commander Shade Special Edition.

The centerpiece of the three-day trip was an anniversary gala held at Mexico City’s Hotel Reforma, where guests walked an orange carpet (orange and black are Mido’s traditional colors), posed for photos with brand mascot Robi the robot (a character from the brand’s ads in the 1930s and ’40s), and experienced a multi-sensory journey through Mido’s history. Hosted by Mido’s president, Franz Linder, and its brand director for Mexico, Edgar Embriz, the event’s highlights included historical images and video displays, a live aerial dance, and an exhibition of important vintage Mido watches representing every decade from the 1920s to the 2000s. 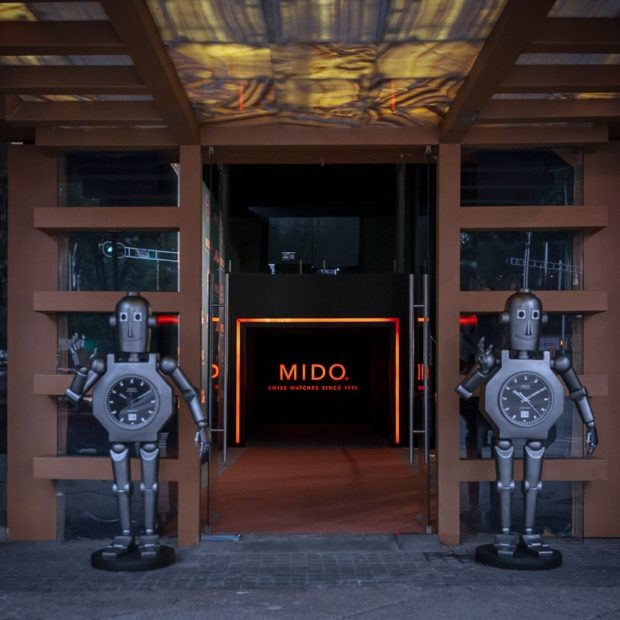 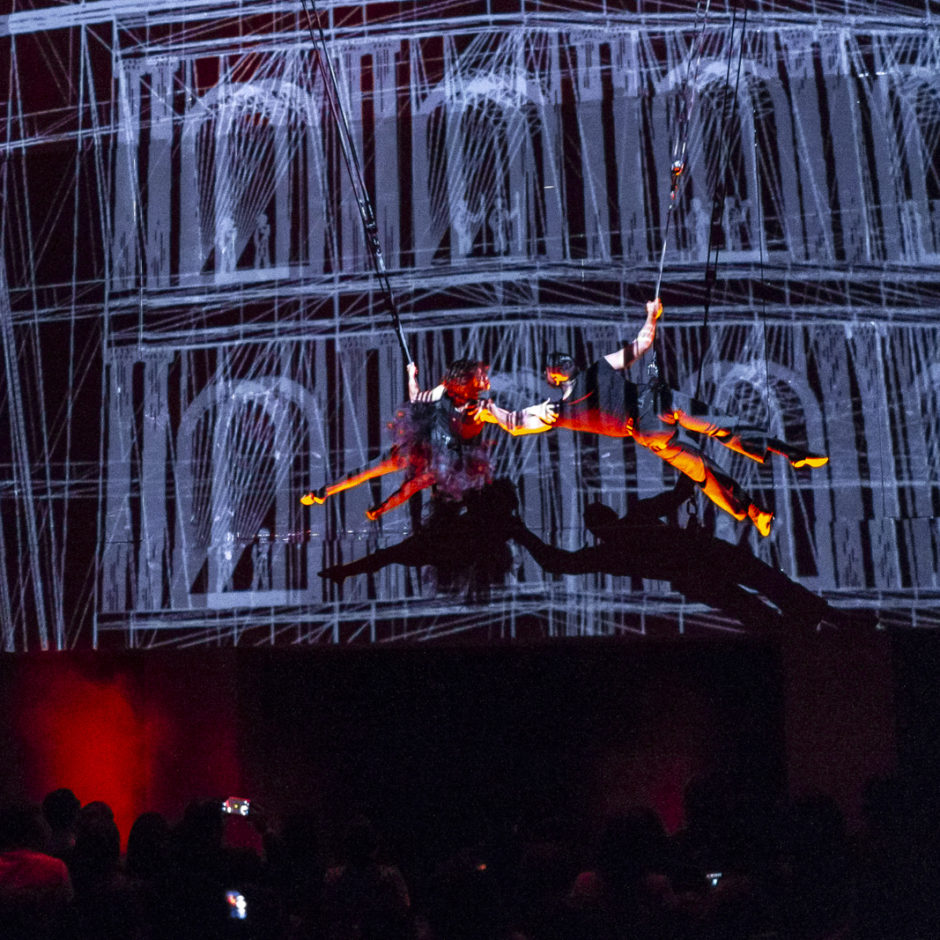 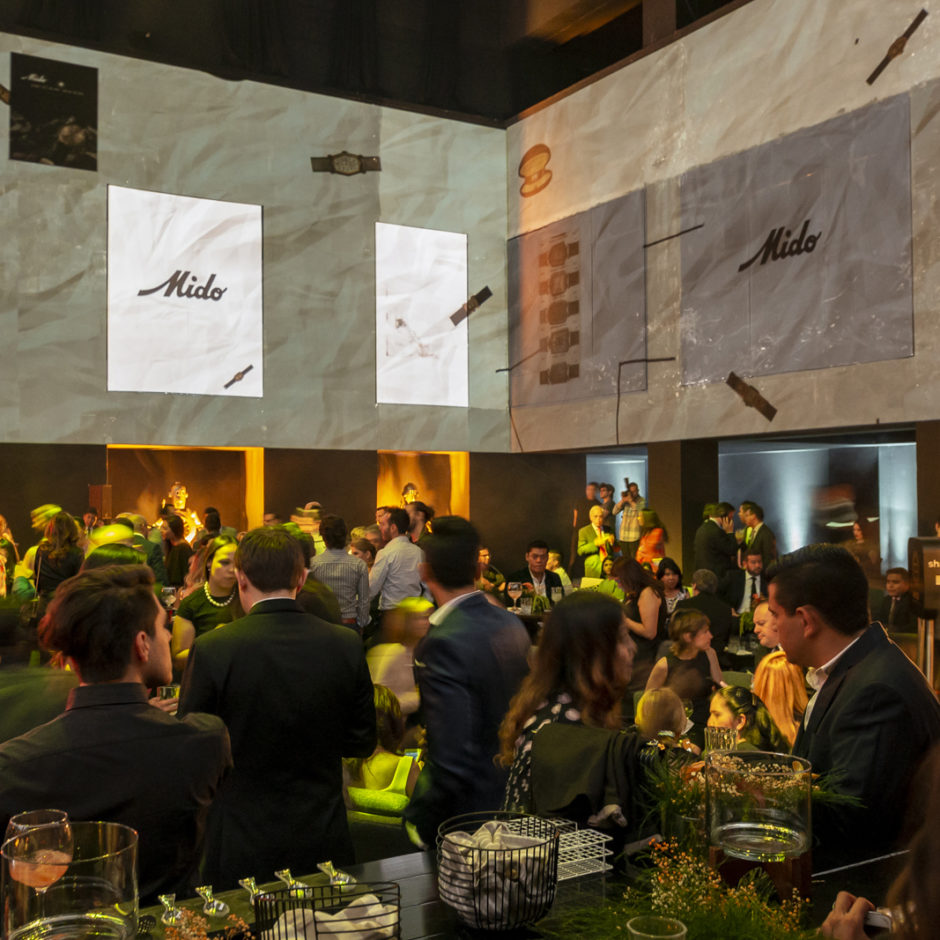 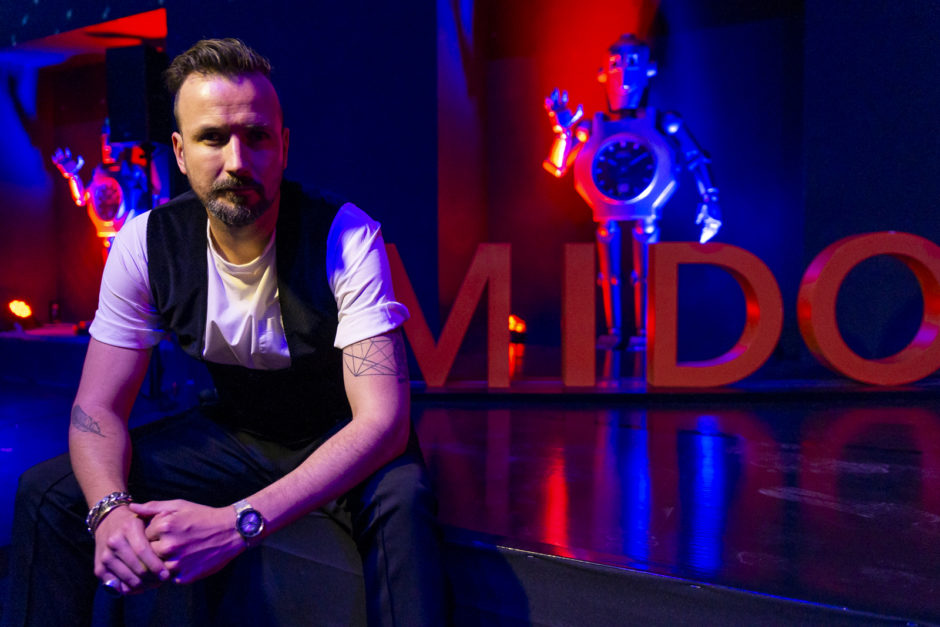 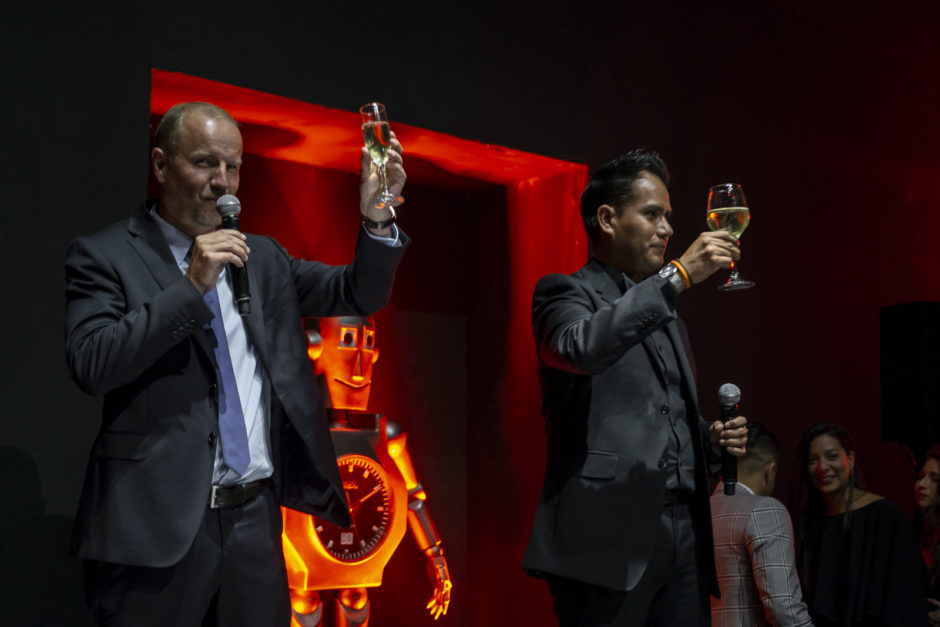 One of those important watches is, of course, the Mido Commander, which was launched in 1959 and has been produced continuously ever since — something of a rarity considering the watch world’s shifting trends. The Commander Shade Special Edition, part of the anniversary collection unveiled at Baselworld 2018, is in many ways a faithful homage to that original timepiece, with its monocoque polished 316L steel case measuring a mere 37 mm in diameter — a standard men’s size during the time of the Commander model’s launch but downright modest-to-minuscule today — and a wide dial opening framing an old-school acrylic crystal hot-stamped with a vintage Mido logo.

The dial itself is what makes this watch less a re-creation of the Commander model popular in the 1960s and more an intriguing mashup of 1960s and 1970s styles. The eye-catching smoked sunray dial, with its two-tone, graduated silver-to-black finish, takes its inspiration from a specific Commander model from 1979. Along the dial’s periphery are applied, polished indices with black varnished centers. Lining up with each of these small, vintage-look hour markers are 12 applied dots of “neutral” Super-LumiNova along a polished flange. The luminous substance also coats the flat, diamond-cut, rectangular hour and minute hands, which sweep around the dial along with the needle-thin seconds hand, whose counterweight features a raised Mido logo so tiny as to be nearly imperceptible. The framed day and date window at 3 o’clock — which, at least on the model I wore, can display the date in both English and German, though interestingly not in Spanish — is another nod to the 1970s model, as is the “Automatic” and “Datoday” indications opposite it at 9 o’clock.

Mido is justly known for delivering watches with automatic Swiss movements at affordable prices, and it does so again here, equipping the Commander Shade with the tried-and-true ETA 2836-2, a movement also used in watches by, among other brands, Oris, Ball, and Mido’s Swatch Group stablemate, Tissot. According to the watch’s specs, this version is Élabore-grade — one level above “Standard” but below “Top” in ETA’s hierarchy for rate accuracy, adjustments, and isochronism, and in this case, not COSC chronometer certified like many of its Mido brethren — with 25 jewels, a 28,800-vph frequency, and a 38-hour power reserve. If one were to consider criticizing the brand for not using the highest-grade version of the movement, one might reconsider upon realizing that this Élabore ETA 2836-2 features a high level of haute horlogerie decoration — including a rotor graced with côtes de Genève and an engraved Mido logo — despite the fact that these attributes are hidden behind the solid steel caseback, which, remember, is part of a monocoque (single-piece) case construction and thus not removable for a peek at the micromechanical engine inside.

Rounding out this watch’s Seventies vibe is, of course, the steel mesh “Milanese” bracelet, which, like the sunken, wafer-like crown, integrates smoothly and securely into the case. This retro style of bracelet, which suits this retro-look watch perfectly, is having a bit of a revival lately, perhaps because it combines the sturdy wrist presence of a bracelet with the adjustability of a leather or rubber strap. Another vintage-style Mido logo appears on subtly raised relief on the outer part of the clasp, which clicks easily and securely into place once the sliding, hinged end has been locked into the proper position along the mesh bracelet to ensure a perfect fit for the wrist.

While the watch is a tad small for my usual tastes, and the small size presented some logistical challenges — winding the watch, and setting its time, day and date functions with that tiny three-position crown is a bit of a trial for anyone with large fingers or close-clipped nails — the Commander Shade definitely won me over during the several days that I wore it exclusively. In its various journeys — to the Mido anniversary event, to several excellent restaurants with mariachi band musical accompaniment during meals, on a sightseeing tour through Mexico City’s monuments and major marketplaces, even a visit to the city’s Museo Frida Kahlo, the historical home of the legendary Mexican artist — the watch remained lightweight and secure on the wrist, legible in all types of indoor and outdoor light, and, as can be hopefully seen from the slideshow photos below, unfailingly photogenic. It’s easy to believe that the Mido Commander, which has been a mainstay on the watch scene for almost 60 years, might even be around for Mido’s 200th anniversary. The Mido Commander Shade retails for $870. 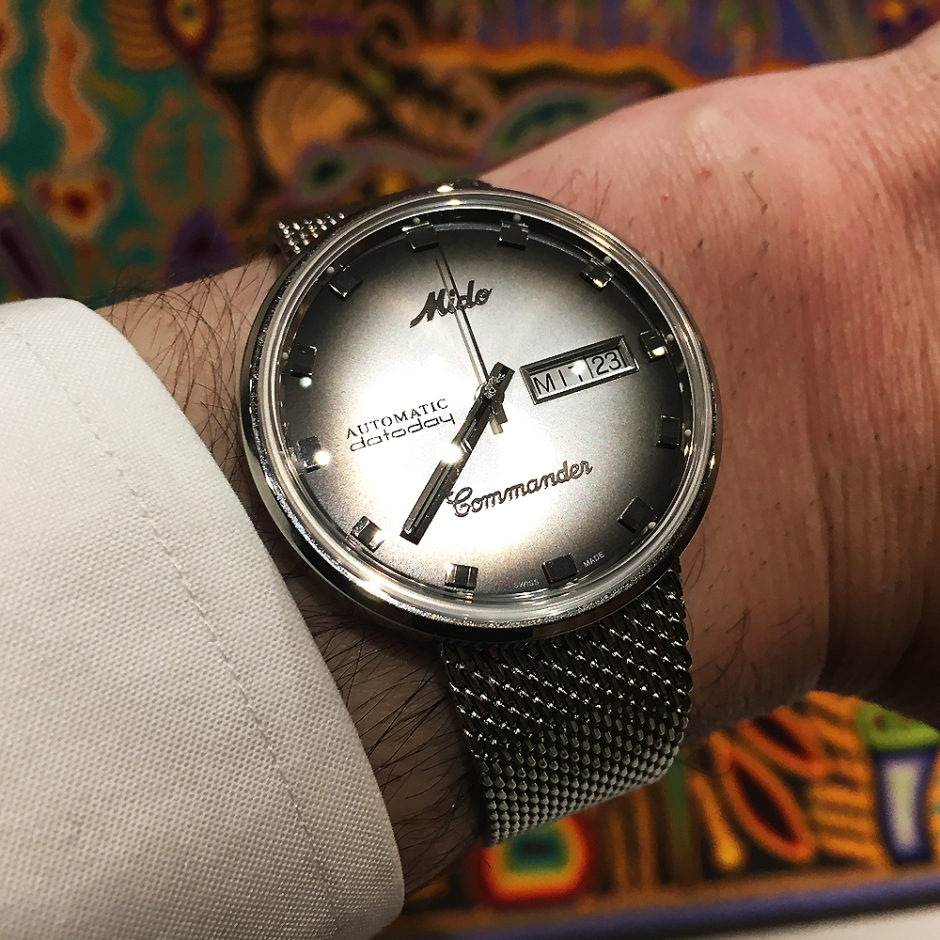 The Commander Shade’s Mexico City Adventures: In my hotel lobby…
1/5 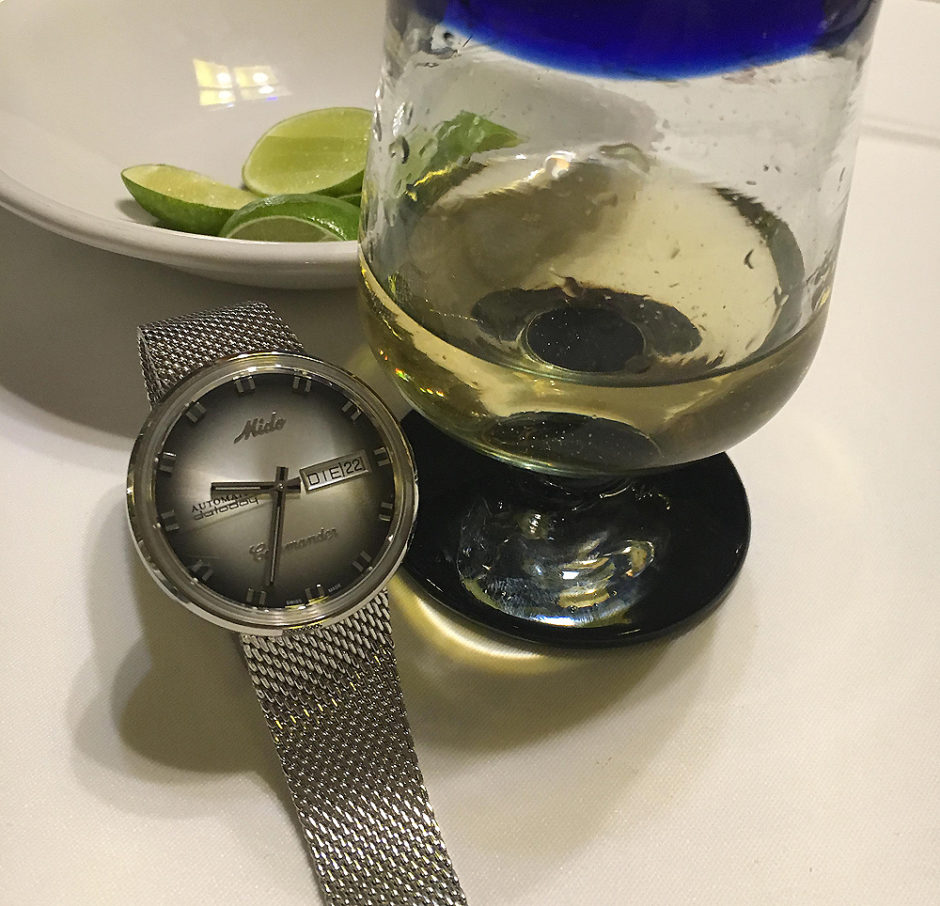 … paired with an after-dinner mezcal…
2/5 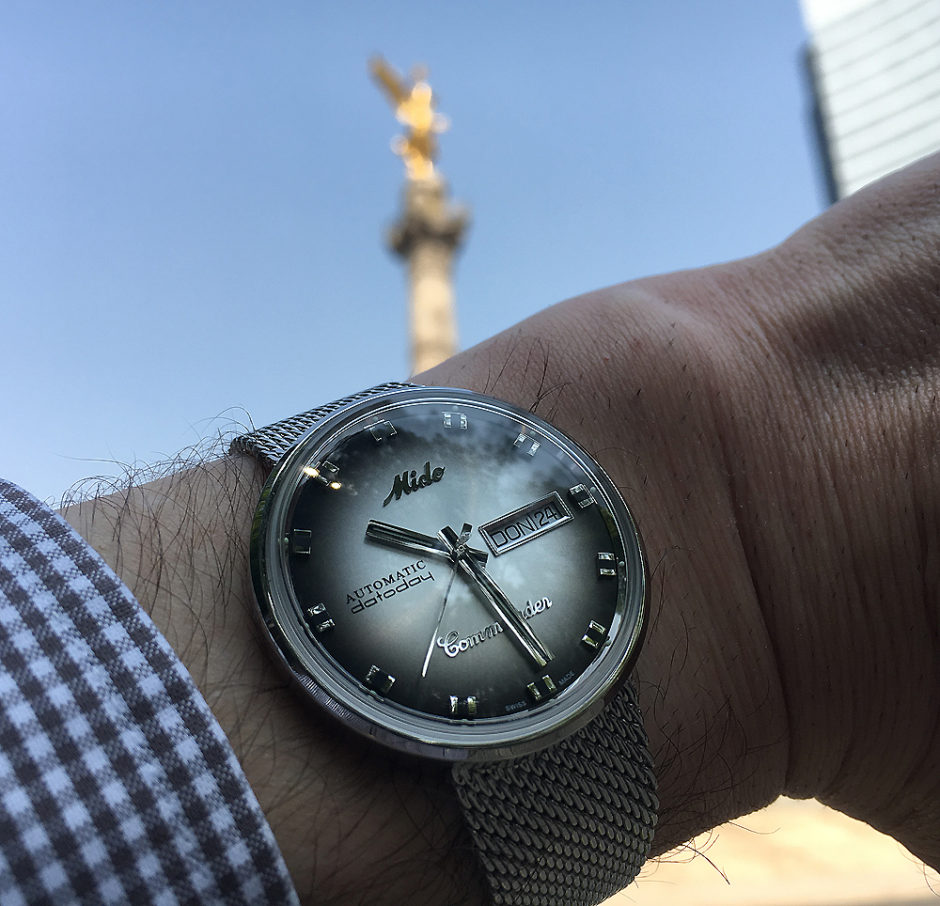 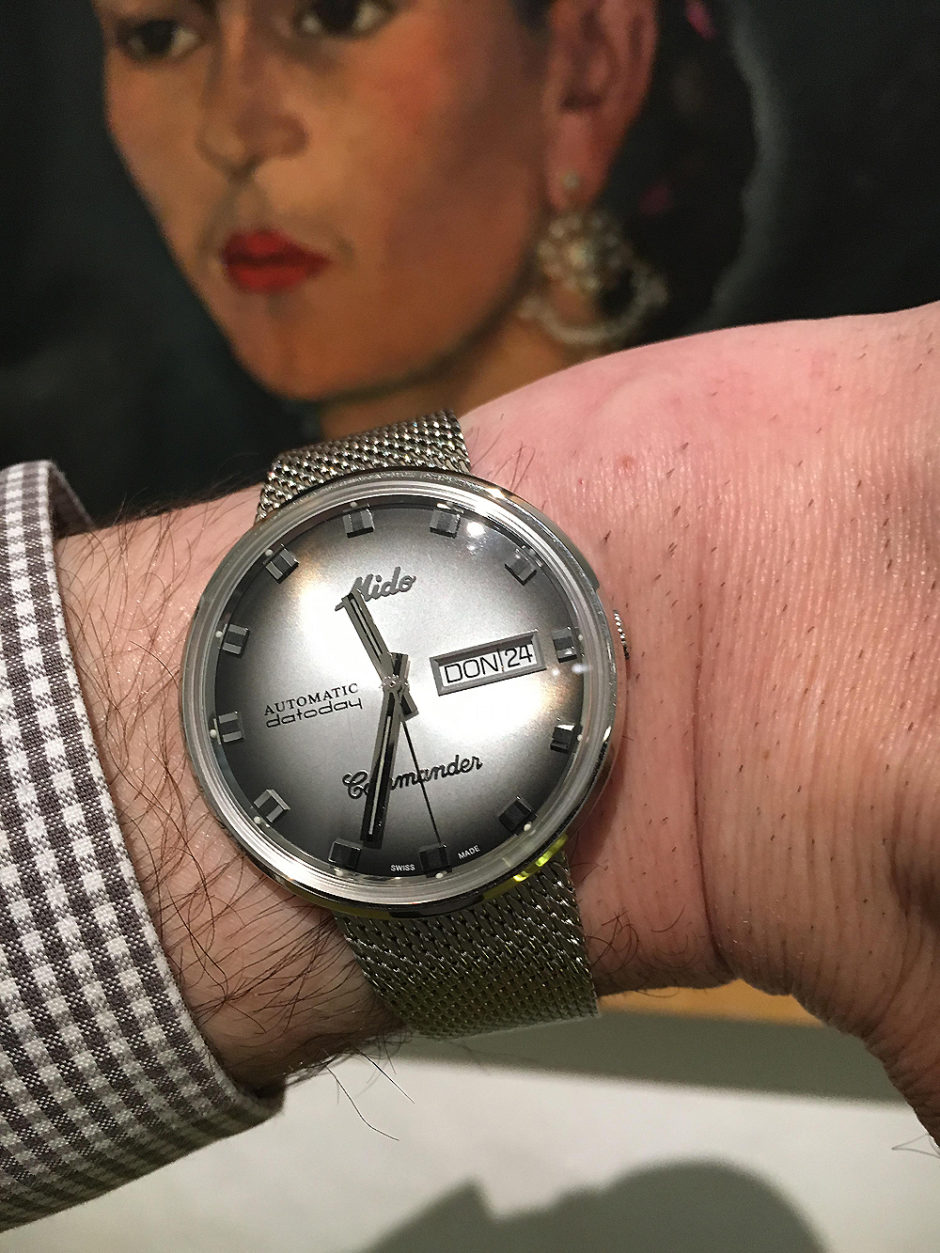 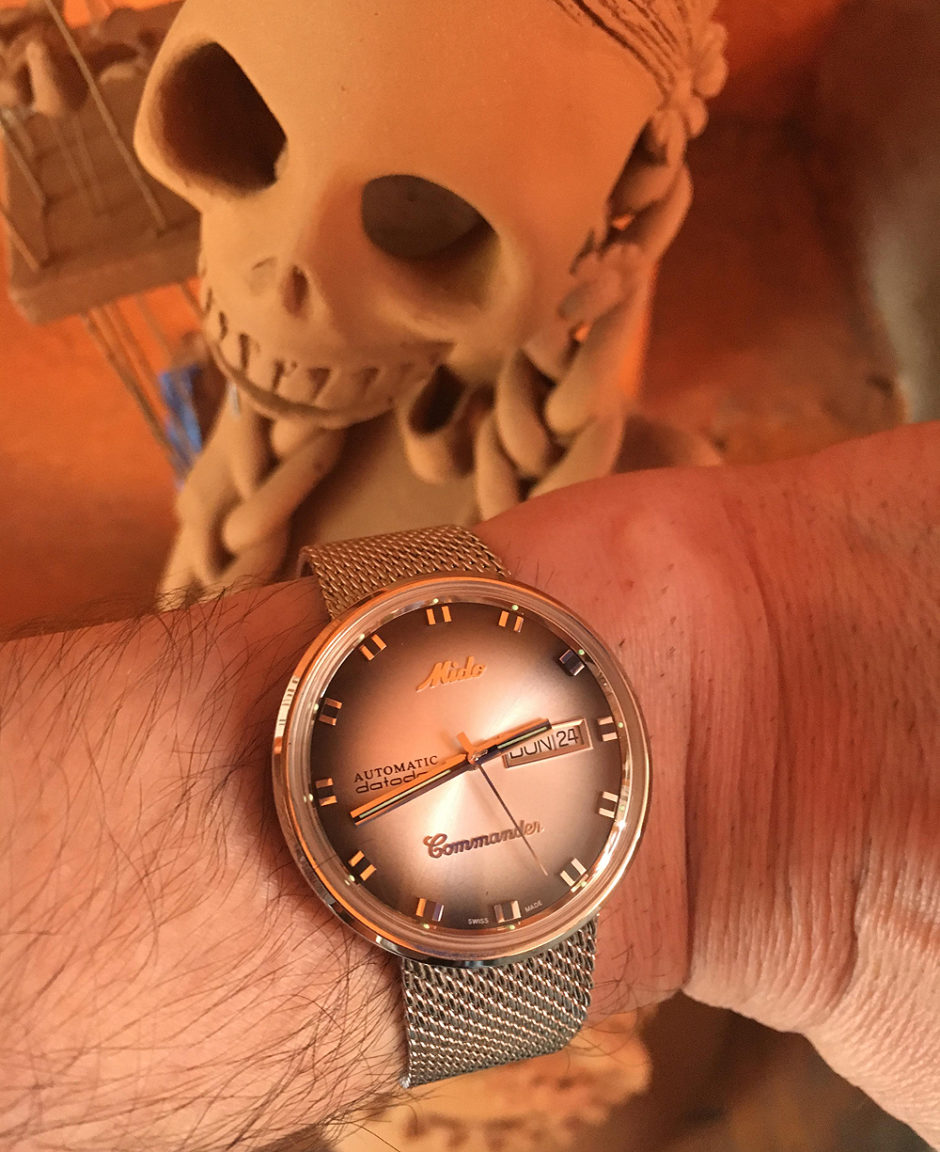 …and with a “Day of the Dead” memento mori at a souvenir shop.
5/5
No Responses to “Borrowed Time: Touring Mexico City with the Mido Commander Shade Special Edition”