The watch world calendar year kicks off with the SIHH and Baselworld spectacles, where the great majority of new releases or “novelties” are introduced to the press and the public. The early summer watch and jewelry shows in Las Vegas – JCK and Couture – typically pale in comparison, at least when it comes to new watch introductions. But that is not always the case.

Occasionally, a watch that either wasn’t ready in time for Basel or Geneva — or whose maker for whatever reason did not attend either show — will debut to the watch press in Sin City. Such is the case with Bovet’s newest limited-edition haute horlogerie piece commemorating the 80th anniversary of the prestigious Italian design firm Pininfarina. Founded in 1930 by automobile designer Battista “Pinin” Farina, the firm, based in Turin and today headed by Battista’s grandson Paolo Pininfarina, is well known to car enthusiasts. The classic and modern automobiles it has designed include the Alfa Romeo Spider, Maserati GranTurismo, Cadillac Allante, Volvo P70 and numerous coveted Ferraris, including the 612 Scaglietti, the 550 Maranello and the new California.

Bovet owner Pascal Raffy and his watchmaking team in Fleurier, Switzerland, collaborated with Paolo Pininfarina on the watch, which marries some of the Italian company’s signature design elements with those of the watch brand, which is known for its pocketwatch-like crowns at 12 o’clock. The result is the Bovet Tourbillon Ottanta by Pininfarina, of which only 80 pieces (and only 80 movements) will be made.

The watch is powered by a rarity: an automatic movement with a tourbillon. The movement, Calibre 16BA01, has 514 total components and uses an off-center, bidirectional microrotor milled from a single block of platinum. The tourbillon also has a feature never before seen: instead of making its revolution in the typical 60 seconds, it makes it in 80 seconds, a technological feat that is a nod to the 80 years of Pininfarina. To accomplish this, Bovet’s engineers created an intersection in the going train, effectively dividing it into two separate reduction trains after the third wheel, one of which transmits energy to the seconds crown and the other to the tourbillon cage. The latter showcases a hand that traverses points representing eight decades in Pininfarina’s history rather than counting off the seconds per minute. A lacquered crown at 3 o’clock, concentric with the tourbillon cage, indicates the seconds.

The Tourbillon Ottanta also incorporates one of Bovet’s newer developments: its 46-mm case — made of brushed titanium and steel with black DLC — is in the brand’s Amadeo style, which means the case can be rotated to show either the “dial side” or “movement side” in the front. (The case is also available with a bezel and caseback in white or rose gold.) The dial side displays hours and minutes by central hands and has a power reserve indicator at 9 o’clock and a big date display, made up of two concentric disks, at 6 o’clock. An instantaneous date-change system was developed specially for this watch. The movement side offers a view of the microrotor as well as a subdial at 12 o’clock with a single hand that indicates hours, half-hours and quarter hours, in the style of some of the earliest pocketwatches. The moving tourbillon cage is easily visible from both sides.

Pininfarina’s influence is notable in the monochromatic gray/anthracite color scheme; in the eight engraved phrases (each reflecting one decade) on the case’s middle section, expressing Pininfarina’s design philosophies; and in the “alcantara-style” velour lining inside the rubber strap, which evokes the luxurious feel of a Ferrari’s interior leather. There is no shortage of other decorative elements, either, including clous de Paris patterns on the bridges of the tourbillon cage as well as sandblasted, chamfered and hand-polished surfaces and circular graining on various elements throughout the movement. Screws, the power reserve hand, and the balance are in a blue PVD that matches the color of the Pininfarina logo. The rim of the balance wheel evokes the shape of an “8” inside a ring representing a “0” — another nod to the anniversary, as is the 80-hour power reserve offered by the two barrels.

The other feature of the Amadeo case is that the wristwatch easily converts into a pocketwatch or freestanding miniature table clock. The wearer simply presses the two pieces on either side of the bow above the winding crown to release the upper section of the strap, and then uses a minute-repeater-like slide to release the lower section. Atitanium chain that comes with the watch can be attached to the upper part for use as a pocketwatch and the pivoting lower bezel at 6 o’clock forms a stable support for use as a clock. No tools are necessary, and the straps can be just as easily replaced

With two faces on the reversible case and the two additional formats, Bovet claims, the Tourbillon Ottanta can be regarded as four timepieces in one — which is good, because only a few of these watches will make it to U.S. shores, and at a price of around $300,000, they are likely to become as exclusive as some of the classic sportscars on which Pininfarina made its name.

END_OF_DOCUMENT_TOKEN_TO_BE_REPLACED 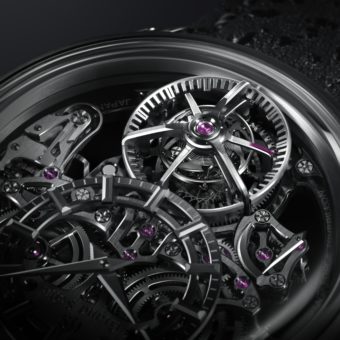